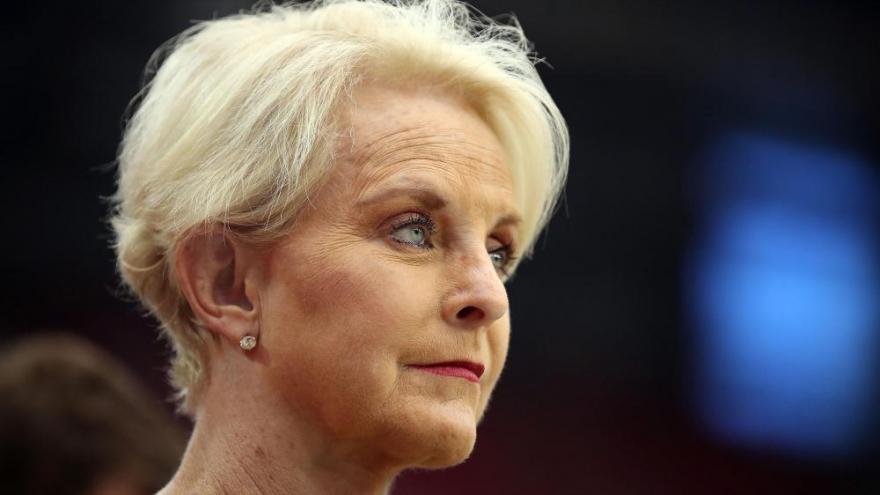 The endorsement -- 12 years after she was a potential First Lady and had the Republican Party behind her and her husband -- follows McCain's appearance in a video about Biden's relationship with McCain at the Democratic National Convention in August.

McCain offered her endorsement on Twitter after Biden had told donors she was supporting him.

"My husband John lived by a code: country first. We are Republicans, yes, but Americans foremost. There's only one candidate in this race who stands up for our values as a nation, and that is @JoeBiden," she said in a series of tweets.

"Joe and I don't always agree on the issues, and I know he and John certainly had some passionate arguments, but he is a good and honest man. He will lead us with dignity," she said. "He will be a commander in chief that the finest fighting force in the history of the world can depend on, because he knows what it is like to send a child off to fight."

Biden tweeted in reply, "Cindy — I'm deeply honored to have your support and your friendship. This election is bigger than any one political party. It requires all of us to come together as one America to restore the soul of the nation. Together, we'll get it done."

At a virtual fundraiser Tuesday, Biden had told attendees that Cindy McCain's decision to endorse him followed President Donald Trump's comments, as reported by The Atlantic, referring to those killed and injured in wartime as "losers" and "suckers." John McCain was a prisoner of war in Vietnam after his plane was shot down on a bombing mission. The injuries he sustained in Vietnam led to lifelong disabilities, including the inability to raise his arms over his head.

"Maybe I shouldn't say it, but I'm about to go on one of these Zooms with John McCain's wife, who is -- first time ever -- is endorsing me because of what he talks about with my son and (John), who are heroes, who served their country. You know he said they're losers, they're suckers," Biden said.

Cindy McCain discussed her endorsement of Biden in interviews with three broadcast networks Wednesday morning, leaning heavily into his character and empathy in her pitch for the Democratic candidate. McCain said that she is hoping to reach suburban women who may be on the fence with her voice.

She said during an interview on "CBS This Morning" that she was the one who reached out to Biden about the endorsement because she saw "a lack of character, integrity, a lack of values, presented by the person who is in charge." In an interview on NBC's "Today," McCain said the former vice president's empathy played a key factor in her decision to support the Democratic presidential nominee.

"I want to feel like my president cares about me and cares about my country, and Joe Biden does," she said, later adding, "Joe has great empathy for people in this country."

McCain affirmed Biden's comment that the Atlantic report was "pretty much" the last straw for her.

Asked if she's disappointed in South Carolina Sen. Lindsey Graham -- a longtime ally of the late senator -- and other Republicans in their ardent support of Trump, she said "No."

"Lindsey is an old and very dear friend and I will always love him and he's just like a member of my family," she said. "Republicans that are -- that believe and are doing what they're doing, it's certainly their prerogative to do so. I just believe, I think things should be different."

McCain said she hopes her husband is "happy with what I'm doing and believes that I've done the right thing."

The high-profile endorsement from the widow of the 2008 Republican presidential nominee comes as Biden attempts to peel off independents and Republicans alienated by Trump's comments and actions -- including in Arizona, which has emerged as a major electoral battleground.

Trump has frequently attacked John McCain by name, including in 2015, when he said he didn't consider McCain a war hero because he preferred those who were not captured. He again went after the late senator Wednesday morning, criticizing him for "endless wars" and the state of the Veterans Administration.

In a video at this year's Democratic convention, Cindy McCain was featured. "My husband and Vice President Biden enjoyed a 30+ year friendship dating back to before their years serving together in the Senate, so I was honored to accept the invitation from the Biden campaign to participate in a video celebrating their relationship," she said in a tweet about the video.

This story and headline have been updated with McCain's endorsement.