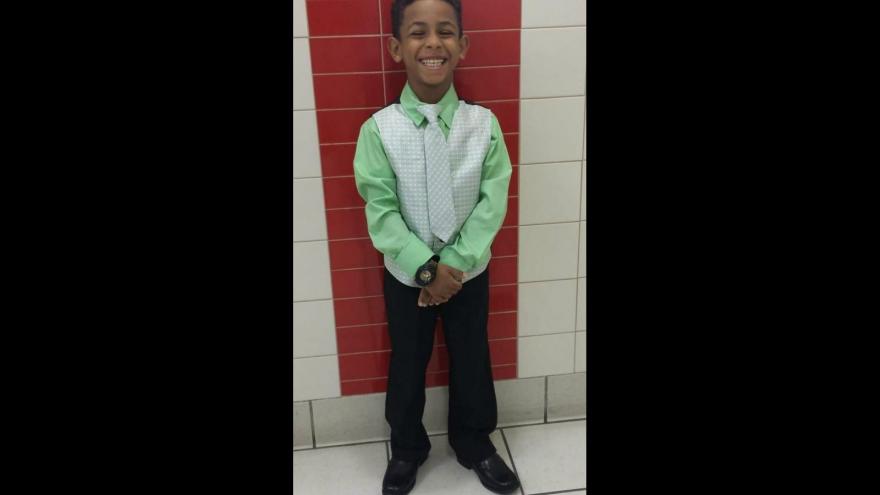 Cincinnati Public Schools is on the verge of settling a wrongful death lawsuit with the parents of Gabriel Taye, who was 8 years old in 2017 when he hanged himself with a necktie in his home.

(CNN) -- Cincinnati Public Schools is on the verge of settling a wrongful death lawsuit with the parents of Gabriel Taye, attorneys for both parties said in a joint press release Friday.

Gabriel was 8 years old in 2017 when he hanged himself with a necktie in his Cincinnati home. His family subsequently filed a federal lawsuit against the district, the school's principal and assistant principal, and a school nurse, alleging that the school did not adequately respond to the boy being bullied, and did not inform them of a bullying incident that took place two days before Taye's death.

The proposed settlement announced Friday includes paying $3 million to Gabriel's family and a commitment on behalf of the district to a slew of anti-bullying measures, though the district admits no guilt. CPS also agreed to two years of ongoing oversight of the anti-bullying program.

"The defendants strongly believe that neither CPS, its employees, nor the school nurse were responsible for the tragic death of Gabriel Taye," Aaron Herzig, an attorney for the district, said in a statement. "CPS embraces the goal of eliminating bullying within schools, as well as continuing to refine and improve reporting, management, and training processes related to incidents of bullying."

In January, a three-judge panel from the 6th US Circuit Court of Appeals rejected CPS' motion to dismiss the lawsuit. Judge Bernice Bouie Donald said CPS' arguments that governmental immunity shielded the school principle and nurse from the lawsuit were "meritless" and "unpersuasive."

The boy's parent's provided "multiple examples of specific instances" in which school officials "withheld information regarding Taye's safety and wellbeing" and failed to punish the students that attacked Taye, Bouie Donald wrote in the 17-page opinion.

"This Court finds their behavior, as alleged, to be egregious and clearly reckless, thus barring them from the shield of government immunity," Bouie Donald wrote.

Security footage was part of lawsuit

At the center of the suit was security footage from two days before Taye's death, in which the boy is seen falling unconscious at school.

In the video, Gabriel appears to be shaking hands with another boy in the entryway of a bathroom before falling on the floor motionless.

Children walk by Gabriel and over his legs, with some appearing to inspect and poke him for about five minutes until an adult enters the bathroom.

At least three adults enter the bathroom, look at the boy, and some kneel down to get closer to him.

Eventually, Gabriel stands up and leaves with the adults.

The lawsuit alleged that the school knowingly withheld the bathroom incident from the boy's parents.

School officials maintained that a school nurse called his mother to pick Gabriel up from school and take him to the hospital.

Gabriel stayed home the day after the bathroom incident, and returned to school the following day. That afternoon, his mother found him dead in his bedroom.

The proposed settlement also calls for "placing an appropriate memorial" to Gabriel at Carson Elementary School.

The Cincinnati Board of Education is expected to hold a vote Monday night that, if it passes, will finalize the proposed settlement.

Al Gerhardstein, an attorney for Taye's family, and Krista Boyle, spokesperson for the Cincinnati school district, both said they expected the board to vote in favor of the settlement.

Representatives for the Board of Education did not respond to requests for comment Friday.