Chuck Yeager, pilot who broke the sound barrier, dies at 97 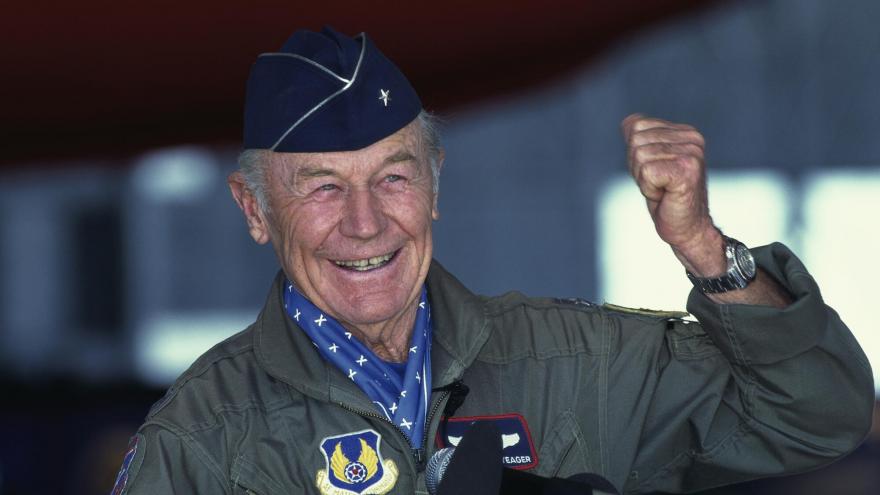 Yeager broke the sound barrier when he tested the X-1 in October 1947, although the feat was not announced to the public until 1948.

(CNN) -- US Air Force officer and test pilot Chuck Yeager, known as "the fastest man alive," has died at the age of 97.

Yeager broke the sound barrier when he tested the X-1 in October 1947, although the feat was not announced to the public until 1948.

His second wife, Victoria, confirmed to CNN Monday night that Yeager had passed after she tweeted from Yeager's verified Twitter account that the World War II flying ace had died.

His legacy captured later generations as well, being featured in the book and 1983 film, "The Right Stuff."

"This is a sad day for America," John Nicoletti, Yeager's friend and ground crew chief, told CNN Monday night. "After he broke the sound barrier, we all now have permission to break barriers."

Nicoletti said Yeager had gone through some physical challenges in recent years and had a fall that led to complications and other issues due to his age.

"Yeager was never a quitter," Nicoletti recalled of his friend. "He was an incredibly courageous man."

Born in 1923 and raised in West Virginia, Yeager enlisted in the Army Air Corps at age 18 in 1941, according to his website.

In 1943, Yeager was commissioned a reserve flight officer before becoming a pilot in the fighter command of the Eight Air Force stationed in England.

Over the course of World War II, he flew 64 missions and shot down 13 German planes, according to his biography on Britannica.

Yeager was shot down over France in March of 1944 on his eighth combat mission but was able to evade capture with the help of the French underground, his website said.

He returned to the US in 1945 and married his wife Glennis, for whom he had named several of his fighting aircraft.

Ascent to breaking the barrier

Following the war, Yeager became a flight instructor and a test pilot, working as an assistant maintenance officer in the Fighter Section of the Flight Test Division at Wright Field in Ohio.

Yeager's exceptional skills were quickly recognized, and he was asked to perform in airshows as well as service trials for new planes, according to his website.

In 1946, Col. Albert Boyd was chief of the Flight Test Division and hand selected Yeager to be a student at the new test pilot school at Wright Field.

While he had only a high school education, Yeager credited his success in the program to his flying abilities.

Col. Boyd chose Yeager to be the first to fly the rocket-powered Bell X-1. "He chose Yeager because he considered him the best 'instinctive' pilot he had ever seen and he had demonstrated an extraordinary capacity to remain calm and focused in stressful situations," Yeager's website explained.

After months of flights with the X-1, Yeager broke the sound barrier with his aircraft, which he named the Glamorous Glennis on October 14, 1947, over Rogers Dry Lake in Southern California.

The X-1 reached Mach 1.06 or 700 mph, making Yeager the first man to travel faster than the speed of sound and earning him the title of "Fastest Man Alive."

Yeager spent the following years continuing to test aircraft and pushing the limits, setting the speed record for a straight wing aircraft of Mach 2.44, December of 1953.

Yeager was awarded the 1953 Harmon International Trophy by President Dwight D. Eisenhower for breaking the record.

He then returned to operational flying in 1954, taking over command of the 417th Fighter Bomber Squadron and being stationed at Hahn Air Base in Germany, and then at Toul-Rosières Air Base in France.

In 1957, Yeager returned to California and took over command of the 1st Fighter Day Squadron at George AFB, according to his website.

He became commandant of the Aerospace Research Pilot School with the rank of colonel in 1962. There, he "presided over the development of a first of its kind institution designed to prepare US military test pilots for spaceflight," according to his website.

Thirty-seven graduates of that program were selected for the US space program, with 26 earning astronaut's wings flying in the Gemini, Apollo and Space Shuttle programs, the website said.

Throughout the 1960's, his position in the Air Force took him to the Philippines, Vietnam, Thailand and Korea.

Yeager retired from the Air Force with the rank of Brigadier General in 1975, having flown 10,131.6 hours in some 361 different types and models of military aircraft over the course of his career, according to the website.

While his official service was over, Yeager continued to be a valued adviser for government and aerospace industry, his website said.

Yeager was one of several people featured in the 1983 film, "The Right Stuff," adapted from Tom Wolfe's nonfiction novel about the first 15 years of America's space program.

"General Yeager represents the best of us. For me, Chuck Yeager will always be the sound of freedom," his friend Nicoletti told CNN.

Correction: An earlier version of this story gave the wrong military branch that Chuck Yeager joined. Yeager enlisted in the Army Air Corps. The US Air Force was formed in 1947.