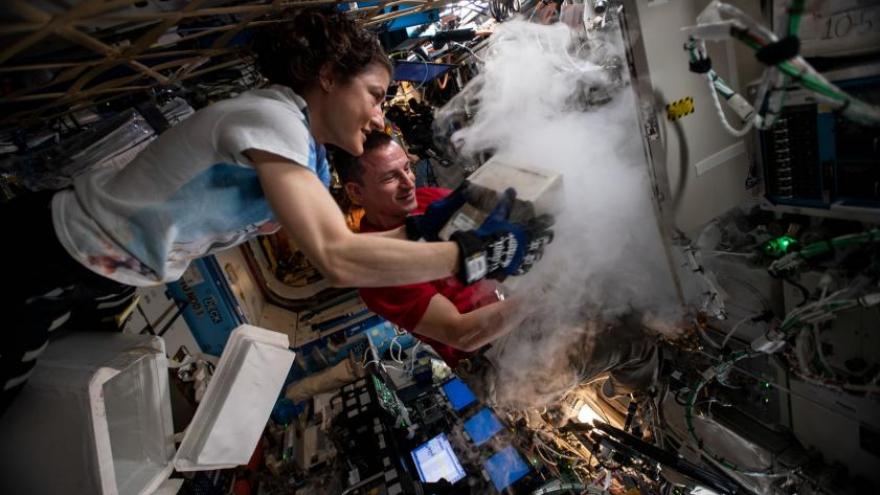 NASA astronauts Christina Koch and Andrew Morgan stow biological research samples into a science freezer located inside the U.S. Destiny laboratory module in this September 18, 2019, photo. Koch made history Saturday, setting the record for the longest single spaceflight by a woman.

(CNN) -- NASA astronaut Christina Koch made history Saturday, setting the record for the longest single spaceflight by a woman.

Koch arrived on the International Space Station on March 14 for her spaceflight mission. As of December 28, she has been in space for 289 days, surpassing the record of Peggy Whitson, who spent 288 consecutive days in space.

"It's a wonderful thing for science," she told CNN's Christi Paul from aboard the ISS, about the feat. "We see another aspect of how the human body is affected by microgravity for the long term, and that's really important for our future spaceflight plan going forward to the moon and to Mars."

According to NASA's schedule, Koch will remain on the station until February 2020, falling just shy of the longest single spaceflight by a NASA astronaut: 340 days, set by Scott Kelly. Astronauts normally stay on the station for six months.

Speaking to CNN, Koch also offered a piece of advice to young girls who are pursuing their dreams:

"Do what scares you. Everyone should think about what intrigues them and what draws them in.

"Those things can kind of be scary a little bit, but they usually mean that you're interested. And if it's just outside what you think is attainable for you and you reach it, it really pays off dividends in more ways than one. It can be rewarding for you personally, and it usually means that you're giving something back to the world in the maximum way possible."

This isn't the first time Koch has been a record breaker. In October, Koch and astronaut Jessica Meir conducted the first all-female spacewalk outside of the ISS. The spacewalk lasted for seven hours and 17 minutes, and the astronauts received a phone call from President Donald Trump as they completed the mission.

Koch said she hopes the record for longest spaceflight by a female astronaut will be exceeded again as soon as possible again, because it means "we're continuing to push those boundaries."