Chris Christie pushes to reopen country despite dire Covid-19 projections: 'There are going to be deaths' 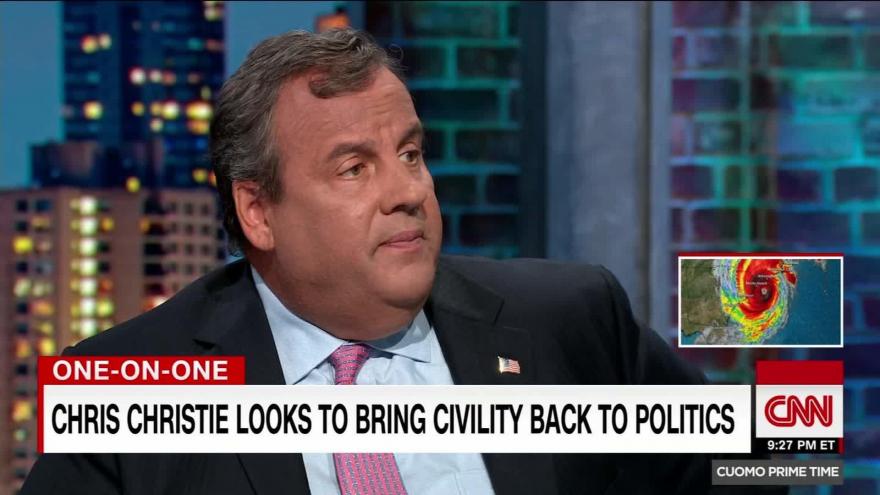 Former New Jersey Gov. Chris Christie said Monday that the country needs to reopen, despite separate, key coronavirus models forecasting that thousands may die daily in the United States from Covid-19 and that more than 100,000 may die in total.

(CNN) -- Former New Jersey Gov. Chris Christie said Monday that the country needs to reopen, despite separate key coronavirus models forecasting that thousands may die daily in the United States from Covid-19 and that more than 100,000 may die in total.

"Of course, everybody wants to save every life they can -- but the question is, towards what end, ultimately?" Christie, a Republican tapped to lead President Donald Trump's presidential transition team in 2016, told CNN's Dana Bash on The Daily DC Podcast. "Are there ways that we can... thread the middle here to allow that there are going to be deaths, and there are going to be deaths no matter what?"

Christie told Bash that "we've got to let some of these folks get back to work, because if we don't, we're going to destroy the American way of life in these families -- and it will be years and years before we can recover." His comments Monday echoed similar characterizations by other Republicans -- including President Donald Trump -- that the economic impact of coronavirus is just as devastating to the nation as the virus itself.

When Bash pressed Christie on whether people would be able to accept reopening in light of news of a Trump administration model projecting a rise up to about 3,000 daily US deaths from coronavirus by June 1, Christie responded, "They're gonna have to."

"We're in the midst of a pandemic that we haven't seen in over 100 years," he said. "And we're going to have to continue to do things."

With governors facing mounting pressure mounting to reopen their states' economies and Trump itching to scale back on social distancing nationwide as soon as possible, more than half of states had lifted aspects of their stay-at-home orders as of Monday.

Yet, a separate influential coronavirus model often cited by the White House is now forecasting that 134,000 people will die of Covid-19 in the United States, nearly double its previous prediction. The model, from the Institute for Health Metrics and Evaluation at the University of Washington, had predicted 72,433 deaths as of Monday morning.

Christie, asked Monday what his messaging would be to the American public if he sat in the Oval Office, said, "The message is that the American people have gone through significant death before." He pointed to the first and second World Wars as examples of how "we've gone through it and we've survived it. We sacrificed those lives."

The former governor lamented the "economic devastation" as "equally sad," and told Bash that while he wasn't advocating for crowded public gatherings like rock concerts or football games, "we have to let certain people get back to work because I can see my own state here."

Christie encouraged vulnerable populations to stay indoors, as "they're the ones who are gonna really swallow this burden badly, the elderly and those with respiratory diseases, depressed immune systems from cancer treatments or other things."

"Those folks are going to have to be even more careful than the rest of the population," he added. "I don't know what the choice is."