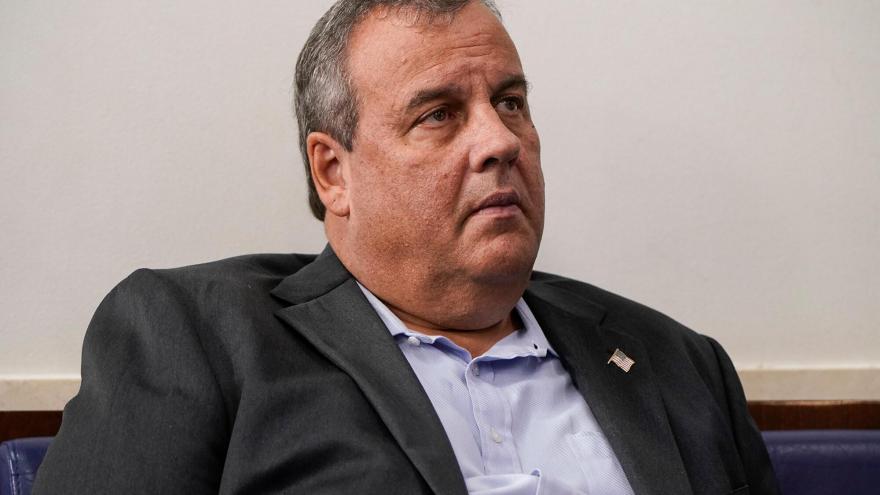 Former New Jersey Gov. Chris Christie listens as then-President Donald Trump speaks during a news conference in September 2020 in the Briefing Room of the White House in Washington, DC.

(CNN) -- Former New Jersey Gov. Chris Christie told some of the Republican Party's most influential donors and bundlers Saturday that the only way for the party to continue building on last Tuesday's electoral successes is to move beyond former President Donald Trump's fixation with the 2020 election results -- while showing voters they will listen and fight for them with a message "that doesn't hurt their ears."

Christie was just one of a half-dozen potential GOP contenders for the White House who addressed the Republican Jewish Coalition conference this weekend in Las Vegas, laying the groundwork for their potential bids as the party waits to see whether Trump attempts another run for the Oval Office in 2024.

But while the others have largely tip-toed around the former President, Christie was the only one to argue that Tuesday night's Republican gains -- namely winning Virginia's gubernatorial race and keeping New Jersey's much closer than expected -- demonstrated that the party must chart a new path forward that advances beyond the grievance politics that have defined the Trump era. If they do not, he warned, they will jeopardize the gains they made last week among women and suburban voters who fled the party during Trump's presidency.

"We can no longer talk about the past and the past elections -- no matter where you stand on that issue, no matter where you stand, it is over," Christie said. "Every minute that we spend talking about 2020 -- while we're wasting time doing that, Joe Biden, Kamala Harris, Nancy Pelosi and Chuck Schumer are laying ruin to this country. We better focus on that and take our eyes off the rearview mirror and start looking through the windshield again."

He argued that Trump's stepped-back role allowed gubernatorial candidates like Glenn Youngkin of Virginia and Jack Ciattarelli of New Jersey to connect with voters on issues that actually matter to them like parental involvement in education and skyrocketing gas and grocery prices. "People want us to be direct with them. They want someone to fight for them. But they want them to fight in a way that doesn't hurt their ears," Christie said. "We have to speak to their dreams, their hopes, their aspirations for the future. If we don't do that, then we won't once again win back the votes that we began to win back in Virginia and New Jersey last Tuesday night."

In a subsequent interview with CNN, Christie said that with the 2022 elections looming, it is time for Trump to decide whether he wants to be "a leader for tomorrow or a figure of yesterday." He added that he believes Trump can be a "very positive force for Republican candidates" in 2022 if he will "begin talking about the future and tell the truth about the election and move on." But he acknowledged that he had "not a clue" about whether Trump would heed that advice.

When asked how he would advise Republican candidates in tough races next year who will have to navigate around the former President as they continue to try to court the moderate and suburban voters he alienated, the former New Jersey governor said he will urge them to "be yourself and not be scared." He said they should not "worry about what the former President is going to do or not do," because they have no control over his behavior regardless.

Christie said he will wait to make his own decision about 2024 until after the 2022 midterms when he has a better sense of what the political climate will be. But unlike potential contenders like former South Carolina Gov. Nikki Haley and South Carolina Sen. Tim Scott, who have said they will not run if Trump does, Christie said he would not stand aside if Trump vies for a second term.

"Absolutely not. My decision will never be based on anybody else's candidacy," Christie told CNN. "It will be based on whether I believe I have the talent, the skill and the ability to be able to win. And anybody who says that they'll step aside for anybody else, I'd say to you, doesn't belong being president. If you don't believe in yourself enough to stand up to anyone, then you can't possibly stand up for everyone."

Many of the speakers at the Republican Jewish Coalition gathering were bullish about Republican chances of retaking the House and Senate next year, arguing that the Democratic Party has drifted leftward -- from the price tag of President Joe Biden's social safety net package to the vaccine mandates that his administration is rolling out for large employers -- and that that has created enormous opportunities for the GOP in next year's contests.

Florida Gov. Ron DeSantis, who has not said how Trump's plans might affect his own White House aspirations, railed against the Biden administration's Covid-19 regulations, arguing that he would not allow Florida to become a "biomedical security state."

DeSantis and many other high-profile GOP governors have joined the legal battle against Biden's workplace vaccine mandates, which are slated to take effect on January 4 to help curb a pandemic that has now killed more than 750,000 Americans. The rules will require private businesses with 100 or more employees, as well as certain health care workers and federal contractors to get the vaccine.

"We have to stand right now against these Biden mandates," DeSantis said Saturday. "He does not have the constitutional authority to do what he's trying to do. And if he can get away with this, trust me, you ain't seen nothing yet. They're going to do more and more and more."

At least 27 states are suing over the Occupational Safety and Health Administration rule laying out the vaccine mandates, which does allow employees to forgo the Covid-19 vaccine as long as they provide a verified negative test to their employer each week and wear a face mask in the workplace.

White House deputy press secretary Karine Jean-Pierre said during Thursday's press briefing that the administration believes that the vaccine rules will hold up to the court challenges that are being brought by Republican governors.

Both Texas Sen. Ted Cruz and South Dakota Gov. Kristi Noem also predicted that voters next year would revolt against what they view as government overreach when it comes to Covid-19 regulations. Noem, who touted the fact that her state did not "mandate anything," told RJC attendees Friday night that the pandemic served as a chance to re-educate her state "about the importance of making sure you didn't allow the government to make your decisions for you."

"What I said was I was going to trust my people and let them use personal responsibility," she said.

Cruz, who received the most resounding cheers and standing ovation at the RJC gathering as a longtime ally and friend to the organization, predicted that 2022 could be a wave election if Republicans "stand and fight and engage on substance." He argued that Trump had provided a model in that regard: "The man has a steel backbone and he doesn't back down," he said to applause.

The Texas senator said he was looking forward to a time in 2023 when he would bump into a man in overalls in the US Capitol "coming to change the sign on Nancy Pelosi's office."

"Nancy's gonna get on her broom," the Texas senator said to laughter as he referred to the House Speaker. "No, Okay... She's going to get on her private jet, the USS Broom, and fly back to California."

Former Vice President Mike Pence was greeted with a standing ovation Saturday night when he focused his remarks on the Trump administration's achievements in strengthening ties to Israel, including relocating the American embassy from Tel Aviv to Jerusalem.

He did not discuss Tuesday's election results in any detail but predicted that the Republican Party is "just 12 months away from a great Republican comeback."

"Right here and right now, from this point forward, we will all resolve to do our part to win back the House, the Senate, governorships across America in 2022 and we're going to win back this country."