Chipotle says employees can make $100,000 after just 3 years on the job 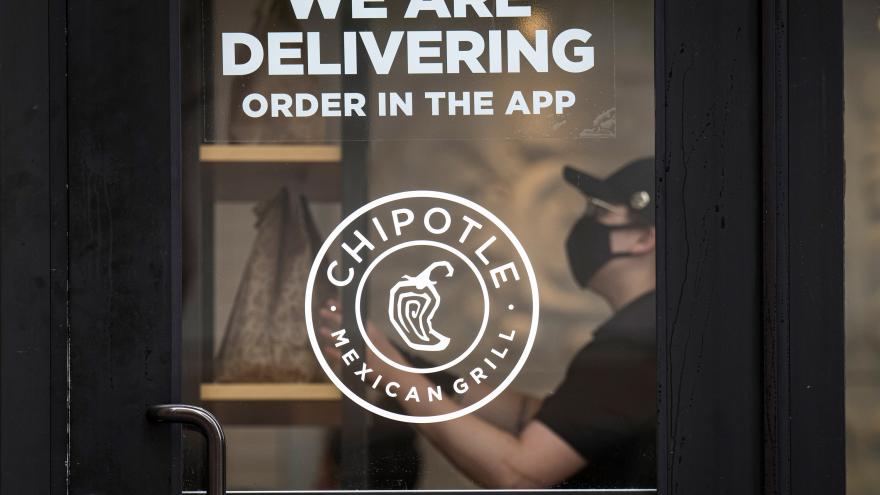 (CNN) -- Restaurants are struggling to hire workers, so some, including Chipotle, are trying to sweeten the pot with higher pay and bigger career opportunities.

Chipotle is increasing the pay of its restaurant workers to an average of $15 per hour, the chain announced Monday. Some employees will become eligible to make a six-figure salary after just a few years on the job.

The wage increases will begin in the coming weeks for new and existing employees, which will result in a pay of between $11 and $18 per hour. Employees can also be promoted to a general manger position within about three and a half years -- a job that has an "average compensation" of $100,000.

Chipotle, which aims to hire 20,000 employees ahead of the summer, said it's also rolling out a $200 employee referral bonus. A virtual job fair is being held on May 13 on its Discord platform.

Hiring bonuses and increased wages are being offered to people that might be relying on the increased in unemployment benefits instead. For some low-earning workers, those benefits could amount to about the same as a check from a restaurant — where they run the risk of exposure to Covid-19. Others, however, have simply left the industry for other jobs.

Major chains in the fast food industry have also said they are staffing up. Taco Bell is hoping to hire at least 5,000 people during a recent nationwide event. McDonald's wants to hire 25,000 employees in Texas alone and IHOP wants to hire 10,000 new people.

Although Chipotle's pay announcement could incentivize people to work for the company, it also has a lousy track record with its staff.

The company's pay practices have come under fire recently in New York. The state is suing Chipotle, alleging that the company violated a law that requires fast food chains to give their employees more predictable, less hectic schedules.

Chipotle also allegedly created false documents stating that the employees "waived" the premium pay they were entitled to as a result of these violations. And, the suit alleges, Chipotle didn't systematically go to current employees to offer them more shifts before hiring new ones — another of the law's requirements — leaving "thousands of employees in an involuntary part-time limbo."

The company also agreed to pay a $1.3 million fine for more than 13,000 child labor violations at several of its Massachusetts locations. The state's attorney general's office criticized the company in a statement for "routinely" violating child labor laws between 2015 and 2019 at more than 50 Chipotle locations. Teenagers under 18 years old were forced to work without proper work permits, late into the night and for too many hours per day and week, according to the state.