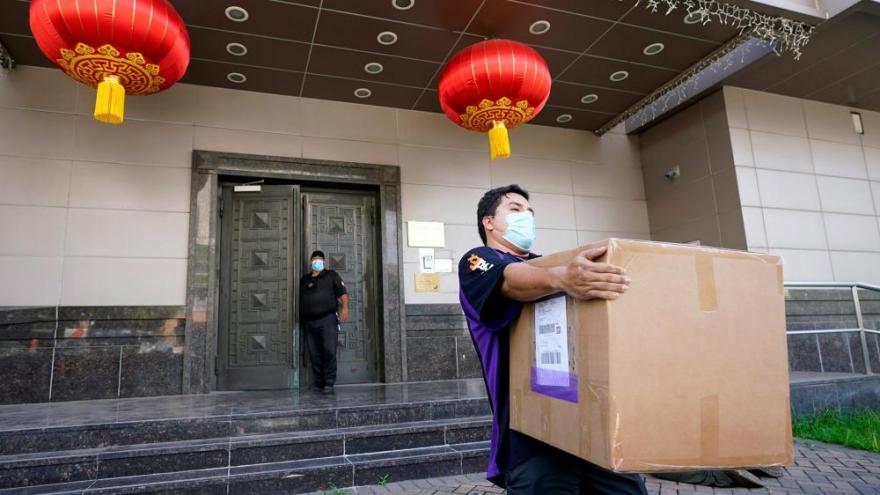 A FedEx employee removes a box from the Chinese Consulate Thursday, July 23, 2020, in Houston. China says “malicious slander" is behind an order by the U.S. government to close its consulate in Houston, and maintains that its officials have never operated outside ordinary diplomatic norms.

(CNN) -- The Chinese Consulate General in Houston has closed following Tuesday's order to do so after US officials alleged it was part of a larger Chinese espionage effort using diplomatic facilities around the US, a State Department spokesperson confirmed to CNN late Friday.

US federal agents and local law enforcement entered the Chinese consulate compound in Houston earlier Friday in a series of black SUVs, trucks, two white vans and a locksmith's van as a crowd of observers and news cameras observed from the edge of the diplomatic compound.

US officials speaking to reporters Friday said the consulate had been implicated in a fraud investigation at a Texas research institution and that Chinese consulate officials "were directly involved in communications with researchers and guided them on what information to collect."

The activities of consulate officials in Houston "are a microcosm, we believe, of a broader network of individuals in more than 25 cities that network is supported through the consulates here," a US Justice Department official said Friday. "Consulates have been giving individuals in that network guidance on how to evade [and] obstruct our investigation. And you can infer from that the ability to task that [a] network of associates nationwide."

The US had given China roughly 72 hours to "cease all operations and events" at the Houston facility on Tuesday, according to the Chinese Foreign Ministry, which called the move an "unprecedented escalation" amid ongoing tension between the two countries.

Relations between China and the United States have plummeted in the past year, amid an ongoing trade war, the coronavirus pandemic, and US criticism of China's human rights abuses in Hong Kong and Xinjiang.

Washington's demand for the Houston consulate to close set the stage for federal agents to enter the diplomatic compound on Friday afternoon. It also triggered a Chinese demand earlier Friday that the US close its consulate in Chengdu.

Late Tuesday evening, police in Houston said they responded to reports of smoke in the courtyard outside the consulate, located on Montrose Boulevard, in the city's Midtown area. Local media shared video of what appeared to be officials inside the compound burning documents.

The idea to close the Houston consulate emerged this spring after China interfered when US officials returned to the consulate in Wuhan to retrieve diplomatic materials, according to a senior State Department official.

Chinese authorities refused to let the US officials leave Wuhan with the pouches, saying they had to search them before leaving, an aggressive move that violates the Vienna Convention which governs diplomatic relations. The encounter left Secretary of State Mike Pompeo irate, the State Department official said.

The headline and story have been updated to reflect the Chinese Consulate General in Houston has closed.