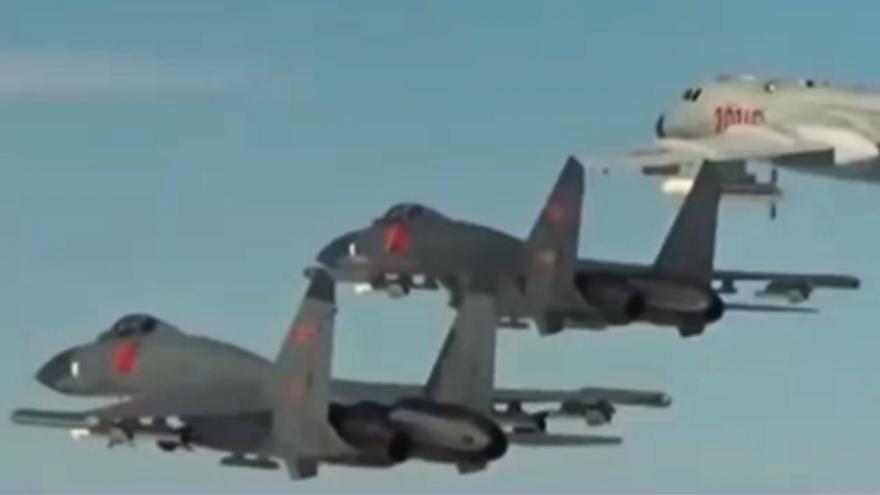 (CNN) -- A new Chinese air force propaganda video appears to use Hollywood movie clips in its depiction of an attack on a target resembling a United States Air Force base.

The 2-minute, 15-second video, titled "The God of War H-6K Goes on the Attack!" was released over the weekend by China's People Liberation Army Air Force (PLAAF) on Weibo, a Twitter-like social media site. It highlights the force's H-6K aircraft, twin-engine jet bombers nicknamed "Gods of War" by the Chinese military.

But eagle-eyed social media users pointed out that some of the explosive aerial footage used appears to be lifted from numerous Hollywood movies, including "The Hurt Locker," "The Rock" and "Transformers: Revenge of the Fallen."

The video, which was seen millions of times before the post was taken down on Tuesday, has been mocked by many users for its apparent liberal use of American action movies sequences, with commentators pointing out that the PLAAF's propaganda is not only fictitious, but likely stolen without credit.

CNN has reached out to China's Foreign and Defense Ministries for comment.

The video begins with some slick scenes of the large bombers in what appears to be the early dawn at a desert airbase. They roar into the sky and seconds later release a missile that zooms down to strike a target.

Comparing a freeze frame of the missile strike to Google Earth images, the target appears markedly similar to the US' Andersen Air Force Base on Guam.

The sprawling base on the eastern tip on the island is a key US military facility in the Pacific. Until earlier this year, it was home to the US Air Force's Continuous Bomber Presence, a 16-year program that rotated US B-1 and B-52 bombers through the island to keep them within quick striking distance of possible targets around the region.

Though that program ended in April, the Pentagon continues to move the strategic jets through Andersen at irregular intervals to keep adversaries guessing.

The base is thought to be a key target for any Chinese attack in the event of hostilities between Washington and Beijing. It was also threatened by North Korea during the height of US-North Korea tensions in 2017.

Before US Defense Secretary Mark Esper visited Guam last month, a US Defense Department release described the island as "a centerpiece of American strategy in the Indo-Pacific."

The release of the video on Saturday came after H-6 bombers were among 37 Chinese planes that crossed the median line in the Taiwan Strait, an informal but largely respected border of control for Beijing and Taipei.

The PLA flights were part of military exercises China has been conducting off Taiwan, the self-governing island Beijing considers to be part of its sovereign territory.

Those drills coincided with exercises the US military was conducting off Guam. Those included the sinking of a retired US Navy frigate and Tomahawk missile strikes from warships on island targets.