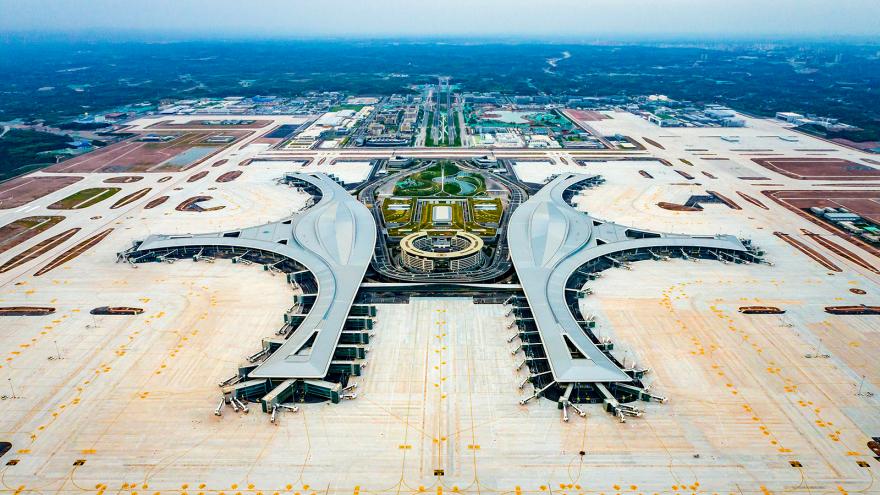 Its inaugural flight, operated by Sichuan Airlines, took off at 11:10 a.m. on Sunday, bound for Beijing.

Chengdu, the capital of Sichuan province, is now the third city in the country to have two international airports, joining Shanghai and Beijing.

Constructed at a cost of about 70 billion Chinese yuan ($10.8 billion), phase one of the massive aviation hub has the capacity to handle up to 60 million passengers per year, further opening up the country's southwest region.

In addition to the famous pandas, Sichuan is famous for its spicy cuisine and beautiful scenery, making it one of China's most-popular tourist destinations among both domestic and international tourists.

For now, however, the new airport will only be catering to the former. China remains closed to most international travelers.

"The new airport in Chengdu was needed to accommodate continued rapid growth," said aviation analyst Brendan Sobie. "China's domestic market has already fully recovered from the pandemic and will continue to grow rapidly. Given the size of the city and its central location in China, Chengdu is very well-positioned to benefit."

According to the latest figures from the International Air Transport Association (IATA), China's domestic traffic was up 6.8% in April 2021, compared to April 2019. The Baiyun International Airport in the southern metropolis of Guangzhou unseated Atlanta's Hartsfield-Jackson to become the world's busiest airport in 2020.

Prior to the pandemic, the old Chengdu Shuangliu International Airport was the fourth-largest in the country, by passenger volume. In 2020, "it was actually the second largest as it was less impacted by the pandemic than other major airports due to its high reliance on the domestic market," adds Sobie.

The new Chengdu Tianfu International Airport was designed by a consortium made up of the China Southwest Architectural Design and Research Institute, China Airport Construction Group Corporation and French architectural firm ADP Ingenierie.

A metro line connects the airport with the city center. Hitting speeds of up to 140 kilometers per hour, the train journey takes from 37 to 44 minutes. A metro line connecting the new facility to the Chengdu Shuangliu International Airport is due for completion in 2023.

Chengdu Tianfu International Airport is just one of many airports China plans to open in the coming years.

The country aims to have 400 airports in use by 2035, a huge leap from the current 241, according to the Transportation Network Planning Outline issued by the government in early 2021.

The most notable facility to open in China in recent years is Beijing's massive Daxing International Airport, which began operations in 2019. Designed by the late architect Zaha Hadid and her Chinese partners, it boasts a terminal the size of 97 soccer pitches.

Prior to its opening, the city had been in desperate need of a second global gateway. The Beijing Capital International Airport (PEK) was the world's second-busiest aviation hub and hitting full capacity, making it nearly impossible for airlines to add flights at desirable times.