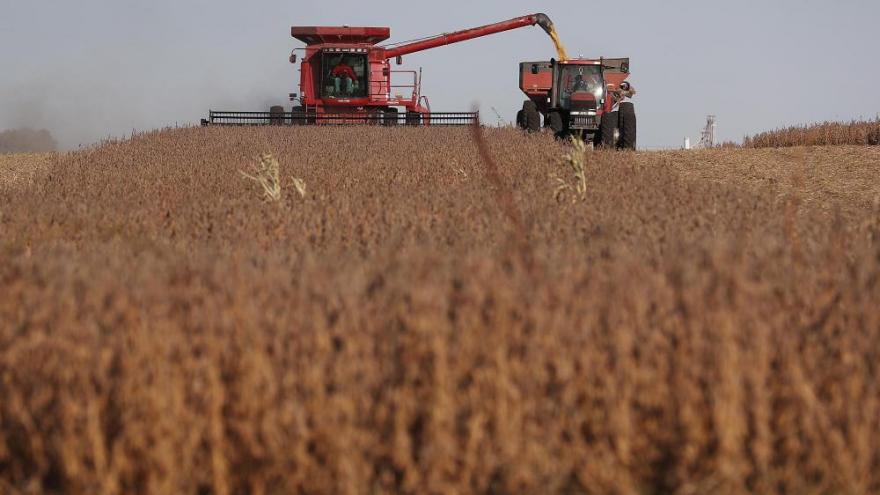 (CNN) -- Dave Walton's Iowa farm was struggling a year ago as President Donald Trump's trade war with China took a bite out of soybean exports.

Now, a year later, he's finding buyers overseas and the soybeans he harvested last week are heading down the Mississippi River to an export port. Even though he's not quite back to where he was before the trade war, Walton's willing to overlook the heartburn it caused.

"The trade issues with China have not been put to bed yet, but I think Trump has made great progress and he could continue that progress if he gets another turn," said Walton, an independent voter. He added that while he hasn't completely made up his mind, he's concerned that former Vice President Joe Biden might be weaker on trade.

Soybean farmers were hit especially hard by Trump's trade war. Exports to China, their biggest market, slowed to a trickle during the past few years. The price for soybeans plummeted and the amount in storage reached record highs.

But China's economy is picking up steam as it continues to dig its way out of the turmoil caused by the coronavirus pandemic, and the country restarted buying American soybeans just in time for this year's fall harvest. That's great news for farmers -- and for Trump.

Farmers have been among his core supporters and could be key in battleground states in the Midwest where polls suggest the race could be tighter than in 2016. Iowa's Senate race, which pit incumbent Joni Ernst against Democrat Theresa Greenfield, is also rated by CNN as a toss-up.

Trump has sent billions of dollars in federal assistance to farmers over the past few years, including about $23 billion in payments to help make up for losses due to the trade war and another $10 billion earlier this year to help them weather the pandemic.

Another round of Covid-related aid payments that Trump announced in September helped send farmer sentiment up to its highest level since the pandemic began, according to the Purdue University-CME Group Ag Economy Barometer.

Just six months ago, the farmer sentiment measure was at its lowest level in four years. The pandemic sent a shock through the food supply chain and some farmers had to dump produce as demand shifted from restaurants to grocery stores. Federal aid helped slow family farm bankruptcies, but they were still up 8% during the 12-month period ending in June, according to the Farm Bureau. Then, the August derecho storm leveled acres of farmland across the Midwest.

While Trump reached the "phase one" trade deal with China in January, experts were skeptical that the big purchase commitments would be met. China is still expected to come up short on its promise. As of August, Beijing had bought just $11 billion of the $36.6 billion it has promised. Still, half of farmers believe those commitments will be met, according to the Purdue University survey.

"We're not going to quite make the goal in the phase one deal, in part because China started buying too late in the year," said Grant Kimberley, a farmer and director of market development at the Iowa Soybean Association.

"But if they continue on this pace, we might get over it next year. It's looking really good," he added.

The goal of Trump's trade war was to get a broader deal with China that would address what his administration called unfair trade practices, such as intellectual property theft and forced technology transfers. But tit-for-tat tariffs put in place during negotiations targeted American agricultural products. Many of the duties remain in place, and the phase one deal did little to address those long-standing issues.

Trump's aid payments helped farmers stay afloat. Even though farm cash receipts are expected to fall to a decade low this year, the government payments are expected to send net farm income up 23%, according to a Farm Bureau analysis.

Iowa farmers received nearly $1 billion during the first round of Covid-related aid, more than any other state, according to the US Department of Agriculture. Another $450 million has gone to Iowa in the second round, which opened on September 21.

"As a constituency, farmers feel like they're not always represented. I think they were tired of losing trade battles every few years and then four years ago someone recognized them and was ready to start a trade war," said Brian Philpot, CEO of AgAmerica, a nationwide agricultural lender.

"That resonated and is some of the reason that support seems to be holding in many areas," he added.