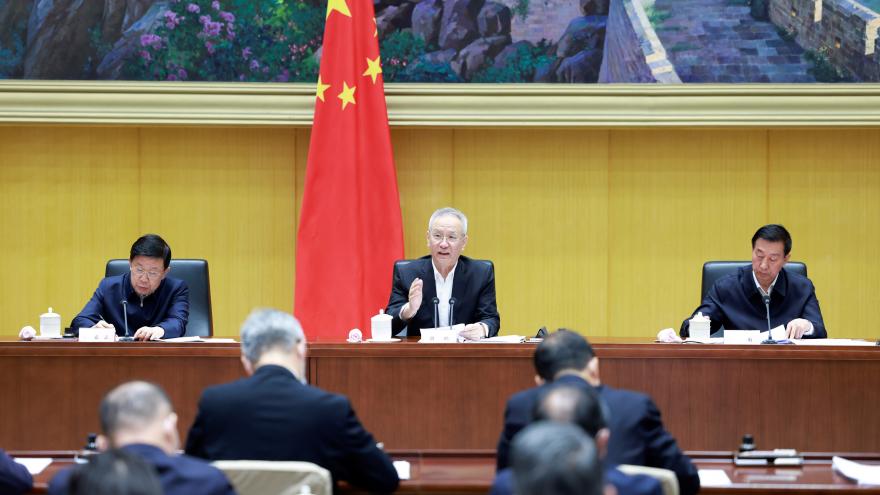 (CNN) -- China is trying once again to lift the spirits of its huge tech industry after a bruising regulatory offensive that has weakened some of its biggest businesses at a time of stalling economic growth.

In a rare public display of support for the private sector, Vice Premier Liu He said Tuesday that the government would "properly manage" the relationship between the government and the market, and back tech companies to list in both domestic and foreign markets. Liu is a top economic adviser to President Xi Jinping.

He was speaking at a symposium with other officials and Chinese tech executives, including Robin Li, the CEO of internet search giant Baidu, William Ding, CEO of gaming and content company NetEase, and Zhou Hongyi, CEO of internet security firm Qihoo 360 Technologies.

Chinese stocks on Wall Street surged after Liu's comments,but mostly declinedWednesday in Hong Kong. This suggests that the market is still deeply concerned about the growth prospects of China's big internet companies, and are looking for more specific commitments from the government.

Those concerns were reinforced Wednesday when Tencent reported zero revenue growth in the first quarter, a worse outcome than expected.

Beijing's year-long regulatory crackdown has left deep scars on the huge tech sector. Coupled with a weakening economy, the campaign has wiped out more than $1 trillion off the market value of Chinese companies. Many tech firms have reported dismal earnings or cut tens of thousands of jobs to reduce operating costs.

The Chinese economy is likely to contract in the second quarter, as Covid lockdowns wreak havoc on activity. Consumer spending and factory output both shrank sharply last month, while unemployment surged to the highest level since the initial coronavirus outbreak in early 2020.

Looking at the fine print

Liu's comments were welcomed by tech executives at the symposium.

The broader US market alsoclosed higher on Tuesday. The Dow Jones Industrial Average closed up 1.3%. The S&P 500 rose 2%, and the Nasdaq Composite gained 2.8%.

"While the [symposium] did not include much new context in our view, we do believe the meeting suggests another positive regulatory signal towards the platform economy and supportive attitude of internet companies seeking listing in overseas markets," said Citi analysts on Wednesday.

But the lack of detail from Liu weighed on Asian markets on Wednesday.

The Hang Seng Tech Index, a key index for Chinese tech firms listed in Hong Kong, dropped as much as 2.3% on Wednesday. It was last down 0.3%. The benchmark Hang Seng Index closed up 0.2% after choppy trading.

The escalating downside risks for growth might have prompted the leadership to end the tech crackdown quickly, Cheung said. But it may take more time to repair investors' confidence, he added.

Earlier this year, Alibaba and e-commerce firm Pinduoduo reported their slowest sales growth as public companies for the December quarter.