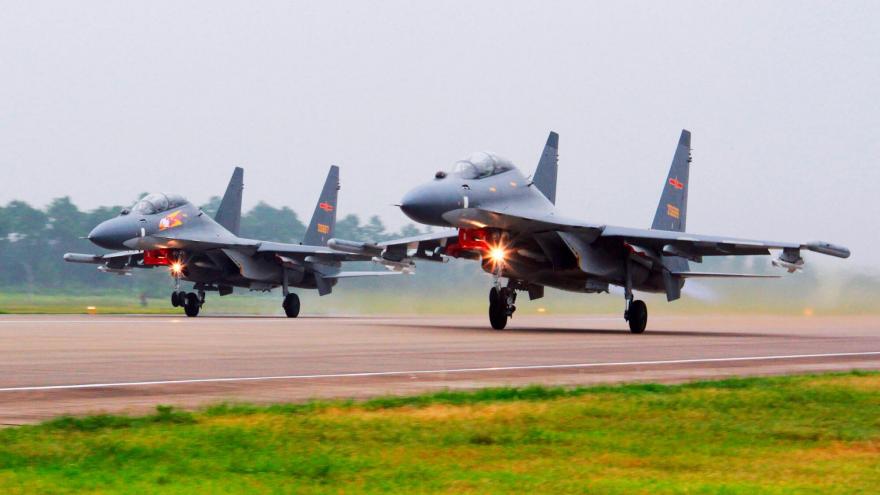 In this undated file photo two Chinese SU-30 fighter jets take off from an unspecified location to fly a patrol over the South China Sea. China flew more than 30 military planes, including SU-30 fighter jets, toward Taiwan on Saturday, Oct. 3, 2021, the second large display of force in as many days.

(CNN) -- The Biden administration is grappling with how to respond to China's ramped-up aggression against Taiwan without accidentally starting a war, as bipartisan lawmakers pressure the President to get tougher on Beijing -- and fast.

Internally, assessments differ over how imminent the threat to Taiwan really is. The Pentagon's Indo-Pacific Command has watched with increasing concern as China has rapidly modernized its military and improved its training with an eye to Taiwan, sources say. But State Department officials are wary of taking a more aggressive approach, and intelligence officials have seen little evidence that China is preparing to invade.

Tensions have risen sharply in the region recently, however, and administration officials were caught off guard when China's air force dramatically ramped up its incursions into Taiwan's air defense identification zone earlier this month.

Even before the most recent incursion, the Biden administration had discussed with Taiwanese officials the possibility of expediting the delivery of American-made F-16s to Taiwan, according to Taiwanese and US officials familiar with the talks. The sale of the 66 fighter jets was approved in 2019, but Taiwan hopes to speed up the actual delivery time—which normally can take up to 10 years—particularly in light of the recent Chinese provocations.

The stakes are high for President Joe Biden, who has made human rights and democracy a key part of his foreign policy agenda but who has also been determined to keep the US out of foreign conflicts. For decades, Washington has embraced the concept of "strategic ambiguity" in dealing with Taiwan, in which the US remains deliberately vague about whether it would come to the island's defense in the event of an attack by China.

But the recent escalation by Beijing marked a major challenge to that posture and has led some Biden administration officials and lawmakers to reconsider that approach, all as the President has been trying to pivot his foreign policy priorities to the Indo-Pacific region.

It's also led some in Congress to ratchet up pressure on the White House to change its posture.

"The time for strategic ambiguity is long past," said a senior Senate Democratic aide. "In light of the clear and present danger Beijing poses to Taiwan's vibrant democracy, the United States must be crystal clear in our intent -- with both our words and our actions. In our current context, ambiguity has invited miscalculation and risk, and an effective deterrence posture can only come from clarity."

The aide added that the Senate is exploring additional steps to provide Taiwan with "the security, economic and diplomatic support essential for our new era of strategic competition."

In response, a senior administration official said that "U.S. support for Taiwan remains strong, principled, and bipartisan and we will continue to engage with Congress on these important matters."

Democratic Rep. Tom Malinowski, who served as the State Department's top human rights official under the Obama administration, also favors a tougher approach, and said it would be an error to think of Xi Jinping as bluffing in his threatening rhetoric. The Chinese leader has vowed to "smash" any attempts by Taiwan to declare independence, and said in a speech this month that "the historical task of the complete reunification of the motherland must be fulfilled, and will definitely be fulfilled."

"It is a consistent mistake of American foreign policy that we project our own pragmatic reasonableness onto others and assume that they don't mean what they say," Malinowski said.

Democratic Rep. Elaine Luria, a retired Navy commander, has gone even further, arguing for Congress to give more leeway to the President to launch military operations abroad to defend Taiwan if necessary.

"The legal limitations on a president's ability to respond quickly could all but ensure a Chinese fait accompli," Luria wrote in an October 11 Washington Post op-ed, referring to the limits imposed by the War Powers Act. "My Republican colleagues introduced the Taiwan Invasion Prevention Act in February to grant the president the authority to act against an invasion of Taiwan and prevent a fait accompli. This act is a good starting point to address a legal dilemma."

'Nothing suggests' an invasion

Still, that political pressure has run up against a degree of wariness from the State Department and intelligence community. Intelligence officials have not yet seen anything to suggest that China is readying a military offensive, according to people familiar with the intelligence assessments.

"It was certainly a dramatic escalation," said one of the people, referring to the 56 Chinese aircraft that flew into Taiwan's defense zone on October 4, the largest-ever incursion. "But nothing suggests that China is preparing for an invasion of Taiwan."

Officials in the State Department's Bureau of East Asian and Pacific Affairs, meanwhile, are leery of taking a much more aggressive posture toward China over the Taiwan issue than the strategically ambiguous status quo.

Former deputy Secretary of State James Steinberg, who was dispatched by Biden to Taiwan in April as part of an unofficial delegation aimed at showing support for the island, called the current situation "very dangerous" and said that ending the strategic ambiguity policy would only embolden Beijing further.

"All bets would be off," he said, because China would see the shift as a "fundamental breach" of the agreements in place for decades.

"It is important for us to reassure Taiwan, but there are ways to do that and to enhance deterrence without sticking our finger in Beijing's eye," Steinberg added.

Biden himself has long been opposed to publicly declaring definitive US support for the island democracy in the event of a Chinese attack.

"The president should not cede to Taiwan, much less to China, the ability automatically to draw us into a war across the Taiwan Strait," then-Senator Biden wrote in a 2001 op-ed. His 24-page national security strategy devotes one vague line to Taiwan, reading: "We will support Taiwan, a leading democracy and a critical economic and security partner, in line with longstanding American commitments."

The senior administration official emphasized that the US "has an abiding interest in peace and stability across the Taiwan Strait," and "will continue to oppose any unilateral changes to the status quo."

"President Biden voted for the Taiwan Relations Act himself and remains firmly committed to the principles therein," the official said, "including that the United States will continue to assist Taiwan in maintaining a sufficient self-defense capability; and that the United States would regard any effort to determine the future of Taiwan by other than peaceful means a threat to the peace and security of the Western Pacific and of grave concern to the United States."

American defense officials said they see 2027 -- the 100th anniversary of the People's Liberation Army and the final year of Xi Jinping's third presidential term -- as a key year in which Beijing could try to take Taiwan by force if peaceful unification has not yet been achieved. Taiwanese Defense Minister Chiu Kuo-cheng predicted earlier this month that China would actually have the "full ability" to invade even sooner, by 2025.

While Xi struck a more conciliatory tone in a speech last week, vowing a "peaceful reunification" with Taiwan, it is unlikely that Taiwan would ever voluntarily give up their relative autonomy; Taiwan's foreign minister last week said the island was prepared to "fight to the end" in the event of a war with China.

One defense official noted that for China, reuniting with Taiwan "is a matter of national pride." But Steinberg, the former deputy secretary of state, said he believes that "China would like to avoid the use of force, because it would be counterproductive and risky to its interests."

Danny Russel, who served as Deputy Secretary of State for East Asia and Pacific Affairs until 2017, echoed that assessment. "The Chinese foreign policy and propaganda community certainly wants to sow doubt in American resolve and convince Taiwan that America won't be there for them," he said. "But that is very different from whether Xi Jinping has the stomach for a fight with the U.S., an immensely capable nuclear power, and its allies."

That doesn't mean things can't spiral out of control, Steinberg cautioned. The region right now is a tinderbox, as the different sides try to leverage alliances and show off military prowess. The British-led Carrier Strike Group 21, for example, has participated in a multinational show of force in the Indo-Pacific, including through the South China Sea, most of which Beijing claims as its territorial waters.

"My personal view is that none of the sides want an [armed] confrontation, but everyone is afraid that if any side shows weakness or a lack of resolve, then the other side will misinterpret it," Steinberg said. "It's a security spiral, and there is no stability in a situation like this."
CORRECTION: An earlier version of this story incorrectly reported the number of F-16 fighter jets approved for sale to Taiwan in 2019. It was 66.