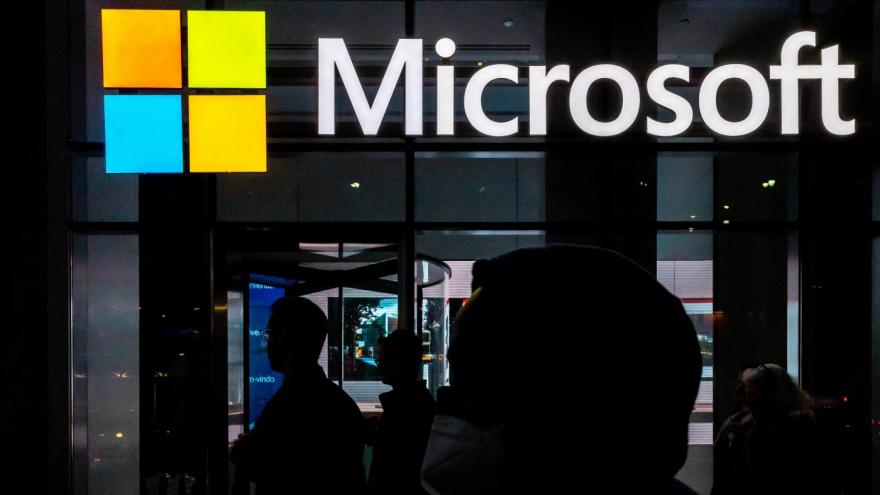 A Microsoft sign is seen on March 13, 2020 in New York City. The company released its report on 10 September

(CNN) -- China, Iran and Russia have dismissed allegations that all three countries have mounted hacking attempts on organizations involved in the 2020 US presidential election.

Technology giant Microsoft said Thursday that hackers from each of the nations were trying to break into US political campaigns. Microsoft's findings are consistent with warnings from the US intelligence community.

"The activity we are announcing today makes clear that foreign activity groups have stepped up their efforts targeting the 2020 election," Microsoft said in a post on its website.

Top US cybersecurity officials acknowledged that Microsoft detected attempts to compromise email accounts of people and organizations associated with the presidential race but have told CNN that there is no evidence election systems were affected.

All three nations deny the allegations.

"Microsoft should not make things out of nothing, and shouldn't drag China into this," said Zhao Lijian, China's Ministry of Foreign Affairs spokesperson at a press briefing on Friday.

Zhao reiterated China's long-held position on the election, adding: "The US election is its internal affair. We have no interest and have never interfered."

Zhao told reporters the US was "the world's largest cyber attacker." He also claimed that US companies were known to have installed technology in products to collect personal data on behalf of US intelligence agencies.

In Iran, Microsoft found that hackers in the country tried to log into the accounts of Trump administration officials and Trump campaign staff between May and June of this year.

Iran's Foreign Ministry spokesman Saeed Khatibzadeh pushed back on the claims in a statement to CNN on Thursday.

"This report is basically inadmissible and absurd," he said.

"The US is leading disinformation campaigns against other countries. Therefore, the US is not in a position to have such a claim."

Microsoft said Iranian hackers had tried to log into the accounts of Trump administration officials and Trump campaign staff between May and June this year.

"For Tehran, it does not matter who is the president in the White House. What matters is that Washington to abide international law, regulations, and norms and stop interfering in other countries and honor its commitments," Khatibzadeh said.

Kremlin spokesman Dmitry Peskov said he had not read the Microsoft report. "What kind of data did they refer to there?" Peskov asked.

"I don't read Microsoft's reports, on what basis does Microsoft believe that these are Russian hackers? Why didn't they, for example, come to the conclusion that they were French or German hackers, or an Estonian group?"

In 2016, the infamous Russian military intelligence hacking group "Fancy Bear" was found to have attacked the Democratic campaign. The group appears to have returned: Microsoft found that the organization has recently targeted national and state parties in the US and consultants who work for Republicans and Democrats.

The company said the Russian group had targeted more than 200 organizations, which included "political and policy-related organizations in Europe" as well as groups affiliated with the election.

Microsoft has teams that track sophisticated hacking groups and the report released Thursday provides the most in-depth insight yet into how hackers are targeting the election.

Intelligence officials have also said they uncovered evidence that Russia is currently interfering in the election to hurt Biden's campaign.

The Russian government has denied it tried to interfere with the 2016 election and Peskov asserted Friday that Moscow does not interfere and is not going to interfere in the electoral processes and internal affairs of other countries.

"There were some absolutely groundless charges, some phobias that there must be Russian cybermonsters behind any cybercrime," Peskov said of the 2016 allegations.

He added that Microsoft's claims of Russian interference only deserve attention if there is substantial proof.

The US intelligence community has assessed that China and Iran prefer Trump to lose in November, but officials have offered no indication, to date, that either country is acting on that preference in the same way as Russia, according to public statements issued by the intelligence community and sources familiar with the underlying evidence.