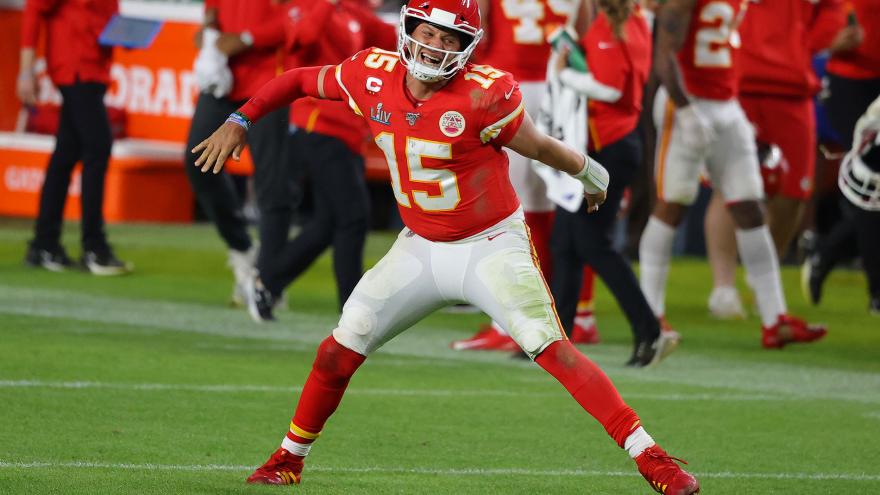 MIAMI (CNN) -- Patrick Mahomes keeps rewriting the NFL history books, and the wait for the Chiefs -- and for their head coach -- is finally over.

A half century after winning their first, the Kansas City Chiefs have won Super Bowl LIV, defeating the San Francisco 49ers 31-20 at Hard Rock Stadium.

Mahomes, last year's league MVP, has joined Ben Roethlisberger and Tom Brady as the only quarterbacks to hoist a Lombardi Trophy before their 25th birthday.

At 24 years and 138 days old on Sunday, Mahomes became the fifth-youngest quarterback to start in the Super Bowl. He's also now the youngest player to win both an NFL MVP award and a Super Bowl title, surpassing Pro Football Hall of Famer Emmitt Smith (24 years, 233 days old on the last day of his MVP 1993 season).

Mahomes is the third African American quarterback to win a Super Bowl, joining Doug Williams (with Washington in Super Bowl XXII in 1988) and Russell Wilson (Seattle, Super Bowl XLVIII in 2014).

And it's the first title for Andy Reid, 61, who up until Sunday night had been known as the best head coach to have never won a Super Bowl or NFL championship. This was his second Super Bowl appearance in his 21-year head coaching career.

It wasn't easy for the Chiefs. For the third straight game, Kansas City had to come from behind, trailing 20-10 heading into the fourth quarter. That was, in part, because Mahomes was bothered by the 49ers defensive front, with defensive rookie of the year Nick Bosa applying pressure on Mahomes much of the night.

With 5:23 left in the third quarter, Mahomes made his first costly mistake, throwing his first career postseason interception, setting up a 49ers touchdown to make it 20-10. He was picked off again on Kansas City's next possession, with a Mahomes throw going behind wide receiver Tyreek Hill and snared by Tarvarius Moore.

Mahomes' 11 passing touchdowns without an interception was the most to start a playoff career in the Super Bowl era.

But as it got late, Mahomes got to work, with three straight touchdown drives in just over five minutes.

With 6:13 left, Mahomes found Travis Kelce in the endzone to cut it to 3. And with 2:44 remaining, Mahomes hit Damien Williams with a 5-yard pass for the go-ahead score. It was a play that would be reviewed, as it appeared Williams may have stepped out of bounds before the ball crossed the plane, but the call stood.

A breakaway touchdown run of 38 yards by Williams put the game away with 1:12 left.

The Chiefs were in their first Super Bowl in 50 years, with their previous title coming in Super Bowl IV.