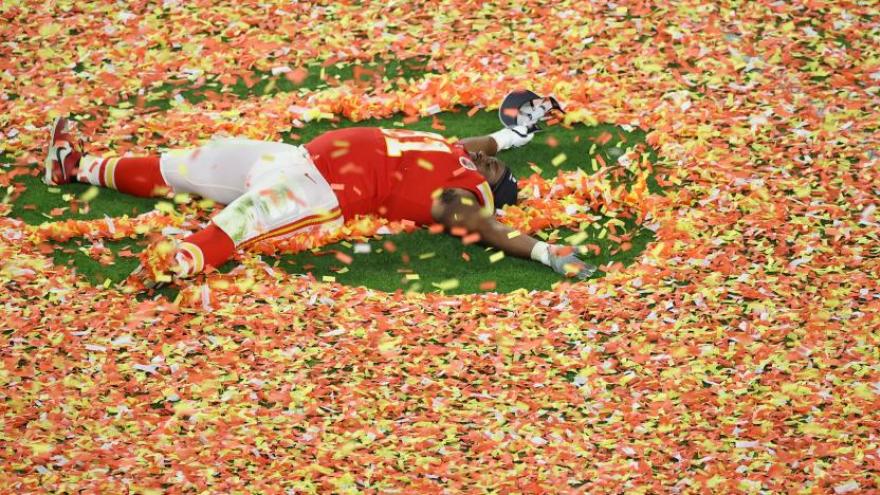 (CNN) -- Derrick Nnadi is celebrating his Super Bowl win with some furry friends.

Every dog at the KC Pet Project animal shelter is free to adopt, thanks to the Kansas City Chiefs defensive tackle. He paid off the adoption fees of more than 100 dogs.

"All my life I always wanted a dog," Nnadi told CNN. "Growing up I didn't have a pet, my parents didn't really allow pets."

The love between a man and his dog

But going into his senior year of college, Nnadi got his first dog, Rocky. And the love between them inspired him to help other animals.

"When I first got him, he was very timid," Nnadi said. "It made me think of how other animals, whether they're owned or in a shelter, are feeling scared and alone."

So in his second year in the NFL, he partnered with the KC Pet Project, a non-profit animal shelter in Kansas City, Missouri, through the Derrick Nnadi Foundation. For every Chiefs win this season, he paid for a dog's adoption fee. The Chiefs won 15 times, including the post-season.

And when the Chiefs made the Super Bowl, Nnadi decided he would pay for every dog's adoption fee, if his team won. That 's over 100 dogs and an average adoption fee of $150. He says it gave him extra motivation to go out and play hard. And when he won, the two celebrations were a perfect end to the season.

"I've never been a champion before. All the years of me playing football, that first time honestly feels like the best day of my life," Nnadi said.

"Thanks to his incredible support, more than 100 available dogs in our care will have their adoption fees sponsored starting today," Tori Fugate, KC Pet Project chief communications officer, told CNN.

The KC Pet Project has cared for over 10,000 animals a year, its website says. If you're looking to adopt a dog, you can find yourself a "good boy/girl" here.