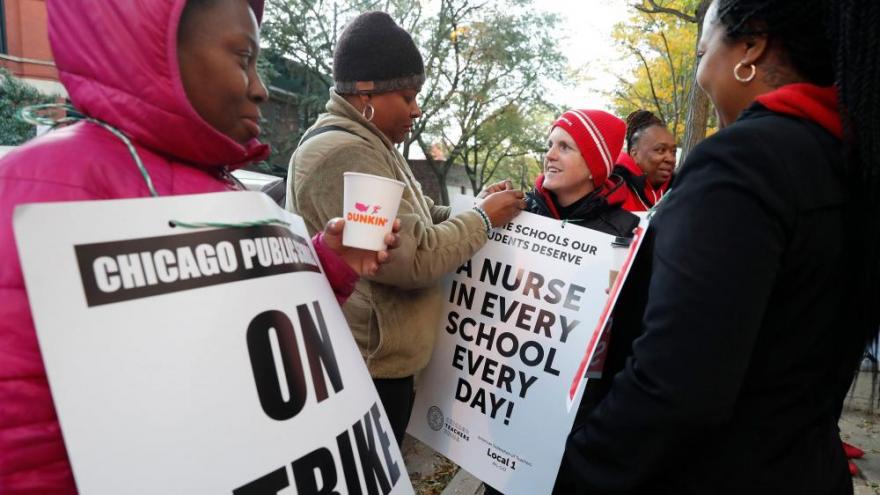 (CNN) -- Some 300,000 Chicago schoolchildren are out of class for the second day in a row Friday, as negotiations continue between the city and thousands of striking educators.

A senior city official told CNN on Thursday the two sides are "still pretty far apart" and the strike probably will go through the weekend.

"We understand that's hard for parents," Jesse Sharkey, president of the Chicago Teachers Union, told reporters Friday morning. "But it's a short-term disruption for what we hope is a long-term commitment to educational justice in this city."

Bargaining team members spent at least 10 hours at the table on Thursday, according to union Chief of Staff Jennifer Johnson.

"It was moving, but not nearly enough," she said in a news conference Thursday night.

About 25,000 educators went on strike with many of the same demands that teachers across the country have clamored for: smaller class sizes, higher raises and more money for schools.

Among the educators is Willie Cousins, who has worked as a teacher's assistant for five years for less than $30,000 a year, he said.

"And to make ends meet, I've had to pick up an extra job at Walmart, Food 4 Less — it all depends — because of my salary," he said. "But I have a family of four that I have to provide for."

The union has emphasized its demand for more support staff. They want a librarian and a nurse in every school.

Dennis Kosuth, a CPS nurse, told CNN affiliate WLS that last year, he had to split his time between six schools.

"It was impossible for me to give the kind of care that I wanted to give to my students," he said, adding that this year he only has three. "But I'm still just as busy."

"To me, there just tragedies waiting to happen because we don't have enough staff in our schools," Kosuth said.

"The ball is very much in their court," said Chicago Mayor Lori Lightfoot on Friday, after spending part of the morning serving breakfast to students out of class.

"We need to be at the table every single day, seven days a week, at least 10 hours a day, until we get a deal done," she said.

Chicago's Board of Education previously released a 71-page counteroffer to the union's demands. It would provide employees with a 16% raise over five years, and $400,000 would be earmarked "toward a pipeline for nurses, counselors and case managers," Lightfoot has said.

The offer includes an additional $1 million to reduce class sizes from grades 4 through 12, and having a "school community rep" at every school with a significant homeless population.

Lightfoot previously called the deal "the best in the Chicago Teachers Union's history."

Sharkey had criticized the mayor Friday morning for saying that there was no more money in the budget, saying she was "stonewalling."

"The fact is there is no more money," Lightfoot said in response to Sharkey's comment. "Period."

Teachers and their supporters gathered outside City Hall Friday afternoon for a rally to express solidarity with each other and discuss their hopes and demands.

"Every single one of us is out here because we love our students. We are invested in our community. We have kids in these schools. We care what is going on in these schools," said Karen Soto, an elementary school teacher and member of CTU's executive board. "It's time for CPS to care, too."

Linda Perales, a bilingual special education teacher at an elementary school, said she was striking because she and others are "mourning the loss of bilingual education services in our schools." The CPS students who are English language learners — nearly 20% of the student population — are not getting the support and services they need, she said.

Bilingual teachers who could work with those students are sometimes pulled for another duty, and their students are left with teachers who don't speak their language and with material they don't understand, Perales said.

Schools and community centers are open to students

Lightfoot said her primary concern was ensuring that students had a place to go during the strike and that those who relied on school for breakfast and lunch were still getting fed.

School buildings will remain open throughout the strike to give students a place to go and access to meals, Superintendent Janice Jackson said. The schools are staffed by administrators and employees who aren't part of the union.

School buses won't be running, and students aren't required to go to school. Dozens of community centers are open to students, including YMCAs and Boys & Girls Clubs of Chicago.

Some parents, like Liam Boyd, do not support the strike. The father of a fourth-grader at Blaine Elementary called the strike "a whole distraction and interruption to the school year."

"I don't support the union," he said. "The school district and the city has been more fair this time and (are) trying to be more fair."