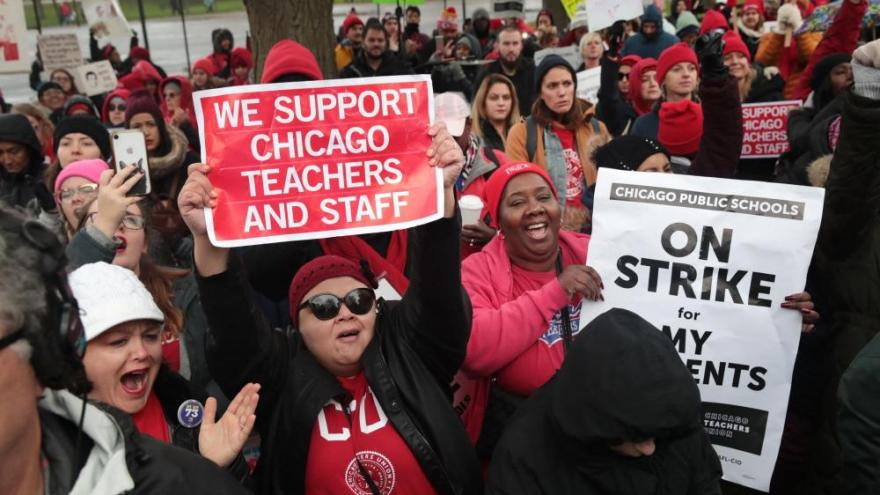 Some 300,000 Chicago students returned to their schools Friday after an 11-day teachers' strike ended with a deal that will make "students' lives better," Chicago Teachers Union President Jesse Sharkey said.

"We're proud of what we accomplished," Sharkey said. "We moved the needle on educational justice" in Chicago, Sharkey added, nothing that deal is the first time that school nurses and social workers have been included in the teachers' contract with the city.

Sharkey said some of the improvements will be noticeable to teachers and students right away, while others will take effect over time, including the protections related to class size, which he said will start in the second semester.

Maria Moreno, the union's financial secretary who was at the negotiating table, said the deal is "unprecedented" and a "tremendous victory for our students in the public schools. We are finally going to start to see the beginnings of improvements of what these kids deserve."

Union leaders thanked the city of Chicago, parents, and the community for their patience. "When you strengthen our schools, you're actually strengthening the city," Moreno said.

For nearly two weeks, union members picketed and rallied in the streets demandingsmaller class sizes and more case managers, librarians and other support staff in a city where many children face poverty, violence or grief at a young age.

Here are some of the terms of the agreement that union members accepted:

-- Staffing increases, including 209 more social worker positions, which will allow for one to be placed in every school, and 250 more nursing positions by end of the contract
-- $35 million a year to reduce oversized K-12 classrooms
-- $2.5 million in recruitment and training

Mayor Lori Lightfoot and union reps have called the contract historic. "This has been a very hard and difficult journey," Lightfoot said.

The deal must still be ratified by CTU rank-and-file members. That vote takes place in schools 10 days after a strike is suspended, the union said.

"The lowest-paid support workers who are the backbone of our schools are going to see raises that mean their families won't have to struggle living in an expensive city where costs keep going up," she said.

There will be make-up days

The agreement will result in five days of classes being made up. The union wanted twice as many days to be added to the calendar but settled on the compromise, both sides said.

Late Wednesday, the union agreed to the five-yearcontract agreement with CPS but the union said it wanted a firm commitment that the days the students missed would be added to the calendar.

The compromise marked a reversal of Lightfoot's initial position. She had said teachers would not get the days back from when they were on strike and that pushing the issue would just keep students out of school longer.