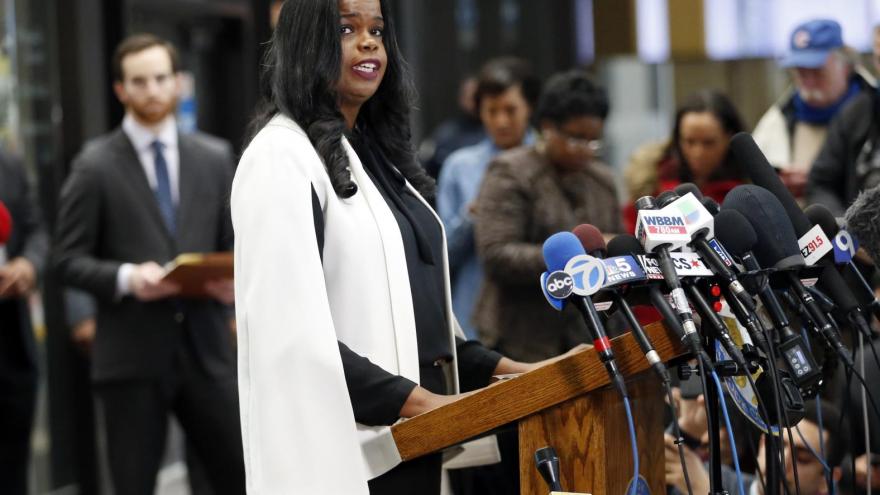 (CNN) -- Kim Foxx, the Chicago prosecutor criticized for her handling of actor Jussie Smollett's case, has virtually assured herself a second term with a victory in the Democratic primary.

After a primary held amid the coronavirus outbreak, Foxx stood with her husband and teenage daughters before supporters Tuesday night. She thanked "everyone who rallied and made it bigger than one thing, one issue, who rejected the notion that we would talk about one singular case and not what matted to the people of Cook County," CNN affiliate WTTW-TV reported.

Foxx, 47, will face Republican Pat O'Brien, a former prosecutor and judge, in the mostly Democratic county in November.

She took the helm of the nation's second-largest prosecutor's office four years ago by ousting a Democratic incumbent heavily criticized for her handling of the killing by Chicago police of a black teenager who was shot 16 times.

Foxx's questionable handling of another high-profile case -- the racist and homophobic attack allegedly staged by Smollett, the former "Empire" actor -- had become the focus of the primary campaign.

The primary was viewed as a test of the durability of a wave of progressive prosecutors elected across the country with vows to reform the criminal justice system.

Foxx's rivals and other critics, including the police union, had tried to overshadow a record of reform praised by some experts, including the expunging of marijuana convictions, targeting gun violence and moving away from prosecuting nonviolent offenses, such as shoplifting.

Foxx faced intense criticism after her office suddenly decided in March 2019 to drop all 16 counts of felony disorderly conduct against Smollett, leading to accusations of political favoritism on her part. Smollett forfeited $10,000 in bail money and did community service.

The prosecutor, who recused herself from the case, was blasted for her contact with Smollett family friend Tina Tchen -- a former chief of staff for first lady Michelle Obama and a lawyer -- before the charges were dropped.

Smollett, who is gay and black, said he was the victim of a racist and homophobic attack near his Chicago apartment on January 29, 2019.

Police investigated the case as a hate crime but later said the actor orchestrated the attack and paid two acquaintances to stage the incident for publicity. The actor has repeatedly denied making up or orchestrating the assault.

Still, a Cook County grand jury in February returned a six-count indictment against Smollett for making false reports to police that he was a victim of a hate crime, according to Dan K. Webb, a special prosecutor who investigated how local prosecutors handled the case.

Webb said his office had "sufficient factual evidence to determine that it disagrees" with Foxx's handling of the case. Webb in a statement said Foxx was unable to provide "documentary evidence" showing "other dispositions of similar cases prior to the Smollett case that would justify this disposition."

Foxx has admitted fault in her office's handling of the case and said it could have been more transparent. But she dismissed Webb's decision to indict Smollett weeks before the primary election as political.

"For the average citizens who live in communities impacted by violence ... Smollett is not an issue for them," she told CNN two weeks before the election. "I'll have to answer for it. I'm accountable to it, but I'm also accountable that our system is fair and just to everyone."

In his concession speech Tuesday night, Conway said, "At the end of the day, as Democrats, we both care deeply about our justice system, and I hope Ms. Foxx is able to enact so many of the reforms that it desperately needs," WBBM reported.

Foxx, who grew up in Chicago's Cabrini Green housing project, in 2016 defeated incumbent Anita Alvarez, whose tenure as top prosecutor was upended by the police shooting death of Laquan McDonald two years earlier. Police were accused of trying to cover up the death of the black teenager.

She became the first black woman to head the prosecutor's office, drawing praise from criminal justice experts for exonerating the wrongfully convicted, increasing the standard for felony shoplifting from a minimum of $300 to $1,000 in stolen goods, and creating a gun crimes unit that put prosecutors to work in police districts with highest rates of violence.