Disputes among Chicago public officials over driving factors of violence 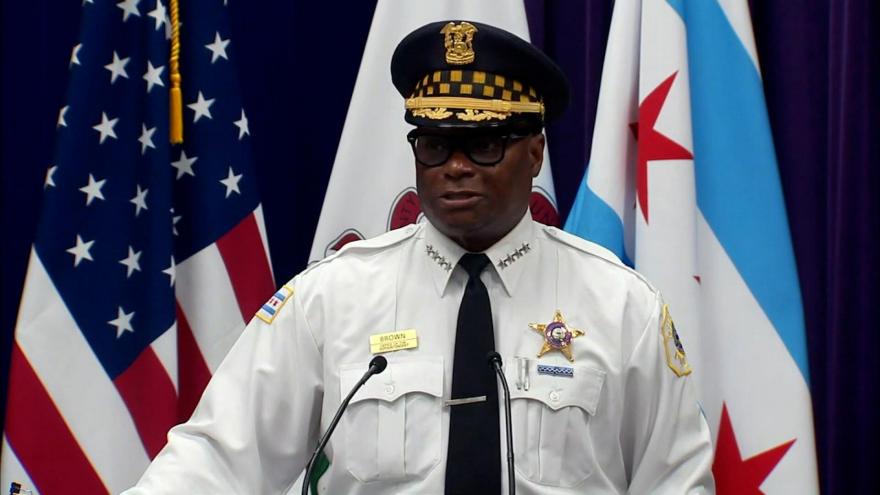 (CNN) -- Chicago's police superintendent on Monday blamed the state court system for another spate of deadly weekend shootings in the city, singling out judges for releasing on bail too many people charged with violent crimes.

But in a year where the number of shootings in Chicago have been up roughly 11% compared to 2020 and 63% compared to the pre-pandemic levels of 2019, there are disputes among city public officials over the significant driving factors of violence.

"What we can do different is challenge the courts to render Chicago safe by holding violent offenders in jail longer, not releasing murderers back into our communities. That's what we can do different," said Chicago Police Superintendent David Brown Monday after a weekend where 70 were shot, 12 fatally.

At a news briefing on Monday, a reporter asked what police could do differently to address shootings like these. Brown responded by pointing to the courts.

"Ask the courts: Why are you releasing violent people -- dangerous people that Chicago police officers arrest and charge -- back into these communities to create this environment of lawlessness that we're seeing here?" Brown said.

"Sit in bond court and see the people being charged with unlawful use of a gun by a felon ... being released back into these communities the same day they are arrested," Brown said.

Brown did not say how many of the weekend's shootings, or any of the shootings this year, were committed by defendants already charged with violent crimes. CNN's request to the police department for comment was not immediately answered.

Electronic monitoring use subject of debate

Part of Brown's issue with the judicial system comes from the designation of "electronic monitoring" for a pretrial release of an alleged violent offender. It's a population changed over the years, according to the Cook County Sheriff's Office.

"In 2010, the average number of individuals on EM on any given day was 503. Since then, the number of people placed on EM has increased dramatically," the sheriff's office said in a statement to CNN Tuesday. "In February, prior to COVID, there were approximately 2,400 individuals on EM. By May 2020, the number rose to more than 3,600."

"Currently, of the more than 3,400 individuals on the program, 73% are facing trial for violent crimes or gun-related offenses -- including 99 individuals awaiting trial for murder. We are engaged in ongoing conversations with the board to secure additional resources and continue to do our best to monitor EM participants around the clock, but a monitoring bracelet cannot predict human behavior."

It's entirely possible for someone to commit a crime within their home or within complete compliance of electronic monitoring, a designation that is handed down by judges.

Neither New York nor Los Angeles appear to have pretrial electronic monitoring eligibility for murder.

As of the morning of July 26, there were 3,428 in Chicago's electronic monitoring program and roughly 72% of them were charged with violent crime or gun-related crime, according to the sheriff's office. Around 2.8% of them are facing a murder charge.

The question is whether Chicago's propensity for pretrial release has contributed to a significant increase in violent crime.

"What we tried to do and why we use data is to do periods over time," Cook County State's Attorney Kim Foxx told CNN in a July interview. "In the last 18 months, Cook County -- like much of the country -- has seen a rise in gun violence. What is also undisputed is that Cook County has long -- particularly the city of Chicago -- has a long history of over proliferation of guns, a long history of dealing with illegal guns coming into our communities that predates bail reform."

In an early July tweet, Foxx said, "Finger-pointing instead of talking honestly about the violence plaguing our city doesn't help bring solutions that make our communities safer. It starts with apprehending those who pull the trigger; police must make an arrest before a case reaches the courthouse door."

The Cook County State's Attorney's Office said its charging rate, as of mid-June, for violent gun cases is more than 95%.

One case cited by some, including Mayor Lori Lightfoot, comes from the killing of 7-year-old Jaslyn Adams in April. One of the men arrested in the case was 21-year-old Demond Goudy. He allegedly "shot and killed Jaslyn Adams while armed with a firearm," court documents show. Goudy is currently being held without bail.

But before that, Goudy was already facing at least three separate criminal cases, court records show. The earliest active case stemmed from September 2020 involving alleged possession of a firearm with a defaced serial number along with charges of alleged robbery in October 2020 and alleged drug possession in January 2021.

"Looking at individual tragic cases in isolation may contribute to the speculation that releasing individuals before trial rather than incarcerating them -- whether by placing them on Electronic Monitoring (EM) or other forms of supervision -- means an increase in crime," said Circuit Court of Cook County Chief Judge Timothy Evans, on the tail end of a violent Fourth of July weekend. "Speculation based on isolated cases is not the same as reality based on a complete picture, and research has shown that bail reform has not led to an increase in crime."

In response to Brown's comments Monday, the Office of the Chief Judge added, "The law and the facts haven't changed."

The office pointed to a 2020 study done by the University of Loyola, analyzing court data from 2013-2019, before and after Cook County issued an order reforming its bail practices, specifically to establish a "presumption of release without monetary bail for the large majority of defendants in Cook County and encouraged the use of lower bail amounts for those required to post monetary bail."

Before the order, 3% of released defendants were expected to have new criminal activity versus 3.1% afterward. On either side of the bail reform order, "97% were not charged with a new violent offense while on pretrial release," the Loyola study cited.

Brown has also cited a gang retaliation culture along with the sheer amount of guns on Chicago streets as main drivers of violence.

It's part of why the city's police department is set to coordinate with the federal government on a gun trafficking strike force, to target known corridors where illegal guns are being trafficked and used in deadly shootings and other crimes.