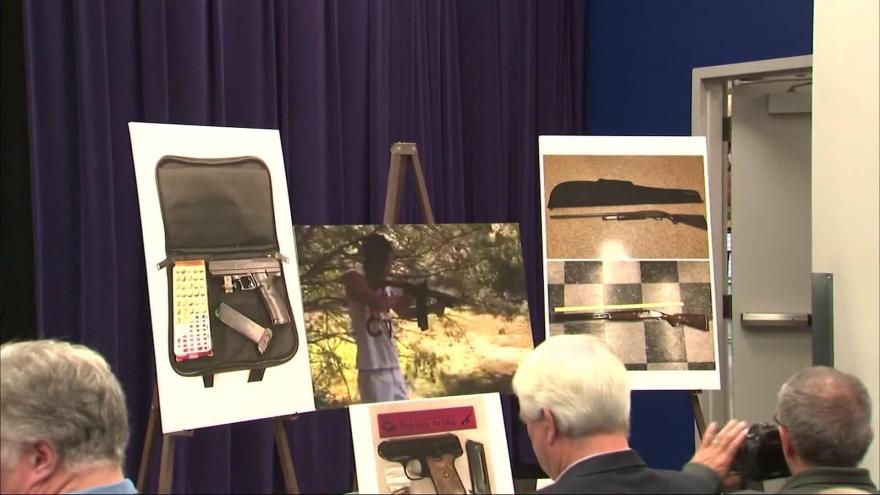 **Embargo: Chicago, Ill.** Chicago Police displayed some of the weapons recovered in what they called "Operation FaceBOOKED."

(CNN) -- Chicago Police said Tuesday that 53 people are in custody as part of "Operation FaceBOOKED," a two-year operation to infiltrate secret groups selling drugs and guns on Facebook.

Interim superintendent Charlie Beck announced the mass arrests at a news conference Tuesday and took aim at Facebook's privacy policies, which he said facilitated the practice.

"Today's announcement will help educate everyone on how some of these dangerous weapons are being sold, and how social media conglomerates like Facebook are encouraging this type of illegal activity by turning a blind eye in the name of member privacy," he said.

The investigation began in December 2017 when an informant told police drugs and weapons were regularly sold on these private groups on Facebook, according to First Deputy Superintendent Anthony Riccio. The private groups are unsearchable, effectively making them invisible to anyone not invited in, he explained.

"Facebook claims to monitor these groups but CPD detectives have labeled these private hidden sites as a version of the dark web that is more accessible to everyday users," Riccio said.

Sixty-five people were targeted and identified in the operation, and of those, 53 are in custody and two have active arrest warrants as a result of the investigation. Police recovered seven weapons -- four handguns, two shotguns and a high-powered rifle -- totaling about $4,100 and 23 types of narcotics totaling about $105,000, Riccio said.

Facebook says on its site that the sale or trade of firearms between individuals is not allowed.

"Illicit drug and firearms sales have no place on our platform. We remove content and accounts that violate our policy and catch over 97% of drug sale content and over 93% of the firearms sales content we remove before it is reported to us," said Sarah Pollack, a Facebook spokeswoman.

"We've had productive conversations with Mayor (Lori) Lightfoot's office about promoting public safety in Chicago and look forward to continuing them. We remain ready to quickly respond to valid legal process from the Chicago Police Department in order to prosecute those who break the law and refer any matters involving credible threats to prevent harm."

One of the men arrested Monday was arrested in 2017 in a previous Chicago Police investigation of Facebook, Riccio said.

He said Facebook has agreed to shut down the groups but refuses to block the individual members.

"Facebook often cites privacy concerns when they're confronted with the facts of our investigation," he said. "The truth is, Facebook is harboring criminals. These criminals know how to use the privacy Facebook affords them, and they profit from the sale of drugs and dangerous guns."

"I think that Facebook needs to recognize that all of us have an obligation to keep each other safe," Beck, the interim superintendent, said. "Another person's rights have to stop when the safety of another individual comes in jeopardy, and that's what laws are all about."