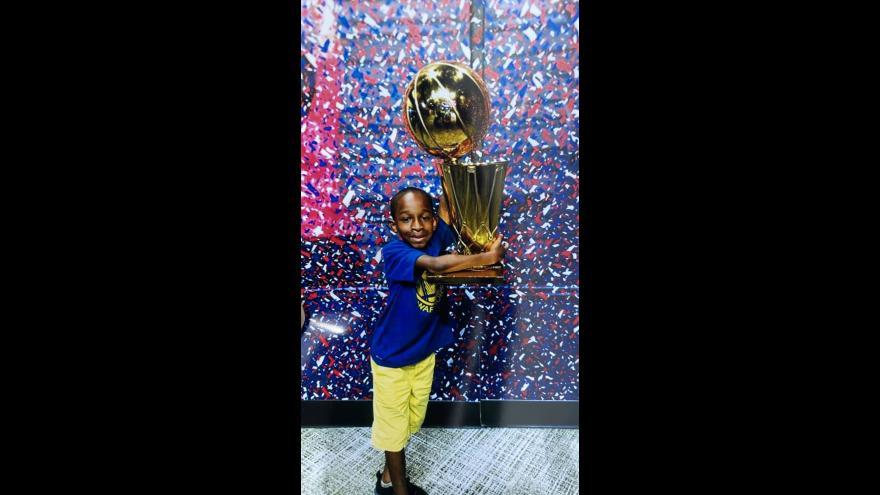 Janari Andre Ricks, 9, was fatally shot on Friday outside his home in Chicago.

(CNN) -- Chicago police officials announced Monday they have a suspect in custody in the murder of 9-year-old Janari Andre Ricks, who was fatally shot July 31 while playing with friends outside his house.

Chicago Police Chief of Detectives Brendan Deenihan said that the suspect, who has not yet been named, drove up to the house, snuck through a side way and then fired, "not at this kid, but at a group of other males who are standing near the poor boy."

"And unfortunately, as the bullets are flying, it's the 9-year-old who is shot and killed. And then the defendant makes good his escape," Deenihan said.

Deenihan said that he and his officers are working with the state's attorney's office to file charges, which he said he expects in the next 48 hours. He said the "speedy arrest" of the suspect was possible because the community came forward with video and information.

The killing came at the end of a deadly month in Chicago and in major cities across the country, which have seen spikes in homicides this summer. The increases coincide with the end of pandemic-related lockdowns and the widespread protests against racism and police violence.

A Wall Street Journal analysis of crime data found that 36 of the country's 50 largest cities saw homicides rise at double-digit rates, though the rates remained well below that of previous decades.

In the first seven months of 2020 compared to the same period last year, Chicago had a 51% increase in murders -- from 290 to 440 -- and roughly the same percentage increase in shooting victims, according to the police department's latest statistics.

Still, overall crime has decreased by 9% compared to the same time period in 2019, driven by a 26% decline in theft and a 19% reduction in criminal sexual assault, police said.

"But none of this matters when a child loses his or her life," he said.

Brown offered his condolences to Janari's family and said bringing his alleged killer to justice was "the top priority of the Chicago Police Department."

"A bright, beloved, athletic, soon-to-be fourth grader, who loved math and basketball was just nine years old when he was shot and killed while doing what every child in our city should be able to do without a second thought. He was playing with friends on a warm summer evening just outside his front door," Brown said. "Then shots rang out and now instead of planning for a future, Janari's parents are arranging their child's funeral."

Brown said Janari was the 38th juvenile victim of gun violence this year and that five of those children were under the age of 10.

Brown called the community reporting and involvement in this incident "the best example" they have seen, but emphasized the Chicago police department needs even more community cooperation in order to continue combating the scourge of violent crime throughout the city.