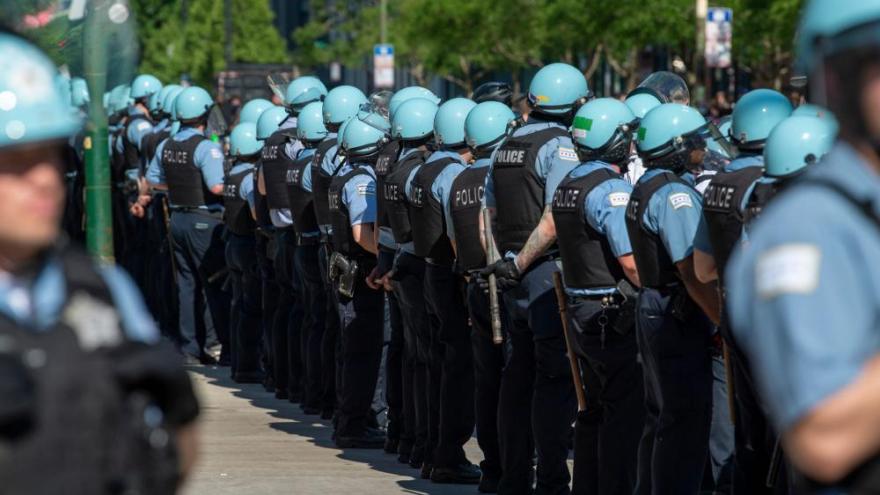 The Chicago Police Department is restricting time off amid a dispute between the police union and the city on Chicago's Covid-19 vaccine requirement.

(CNN) -- About 4,500 Chicago police officers didn't report their vaccination status by October 15 as mandated by the city, officials said Monday.

That means roughly 35 percent of the city's 12,770 officers could be placed on no-pay status in the foreseeable future.

The Chicago Police Department had the lowest response rate of any department in the city, but of the about 64 percent who did report, the majority of officers say they are vaccinated, according to data released by the city. Specifically, 6,894 indicated being vaccinated while 1,333 reported they have not.

Those who said they are not vaccinated are required to opt into twice weekly testing for Covid-19 until the end of the year to remain in compliance with the city policy.

City officials said the disciplinary process will be ongoing and likely happen on a rolling basis, but that this also "starts the process" of trying to get a final number of employees into compliance. The vaccine reporting portal is still open.

One city official said, "It's not going to be an immediate 'we're firing you.' "

The first step is employees will be sent home in a no-pay disciplinary status, as the city vaccine policy is a condition of employment. As of Monday afternoon, no one has been disciplined but that process can now begin at any time.

"It'll hopefully wake them up quickly," that city official said.

Mayor Lori Lightfoot told reporters Monday afternoon that a "very small number" of officers were not complying after going to police headquarters or their district buildings and being asked in person whether they had entered their information online.

For those who still didn't go to the online portal "a CR is being taken out, they are put into a no-pay status, and then the disciplinary process will proceed from there."

Lightfoot said she isn't concerned that the city will have a meaningful shortage of officers for the next few weeks, but mentioned that it has contingency plans. "I'm not seeing, at least for this day, that there's going to be any disruption in our ability to keep our neighborhoods safe," she said.

Most city departments had at or near a 100% response rate to the vaccine reporting requirement.

A memo obtained by CNN states any civilian or sworn employee who disobeys a direct order to comply with the city's vaccination policy "will become the subject of a disciplinary investigation that could result in a penalty up to and including separation from the Chicago Police Department. Furthermore, sworn members who retire while under disciplinary investigations may be denied retirement credentials."

A separate memo issued Saturday informed officers their elective time off would be restricted.

The memos were issued as the police union and Lightfoot clash over the city's requirement that city employees be vaccinated and disclose their vaccine status. The deadline to do so was Friday.

Union president has spoken out against mandate

Negotiations over the police department's Covid-19 policy were underway when the city "implemented their unilateral changes" to the policy while "there were several collective bargaining issues that remained unresolved on the bargaining table," the lawsuit states.

Lightfoot said the same day that the city filed a lawsuit against the police union and union President John Catanzara because her office believes the union is encouraging an "illegal work stoppage to strike, pure and simple ... and we're not having that."

The mayor said then that she doesn't want young officers to destroy their careers over bad advice.

"Over what? Going to a website, clicking yes or no, and if no, saying that you're going to sign up for testing? Really, that's worth it?" Lightfoot said.

Catanzara had spoken out against the mandate to report vaccine status, telling officers they are not required to comply, and the police department has its own Covid-19 policy.

He said city officials should have negotiated about vaccinations with the union.

"All of those things are a change in your employment policies. You have to negotiate with us what that looks like. The city has refused to do that," Catanzara said Monday.

Covid-19 is the leading cause of death for officers across the country, according to the Officer Down Memorial Page.

Citywide, 25,015 out of 31,483 total employees reported their vaccine status as required by the mandate -- a total response rate of roughly 80%. A total of 21,088 employees marked they were vaccinated while 3,927 said they were not.

The Chicago Fire Department had the second-lowest response rate of any department with 72%, despite most of that percentage indicating they were vaccinated.

One city official noted those who indicated "no" on being vaccinated include those who have only gotten one dose or who are not fully vaccinated. These numbers are as of Monday morning, but could fluctuate in the coming weeks.