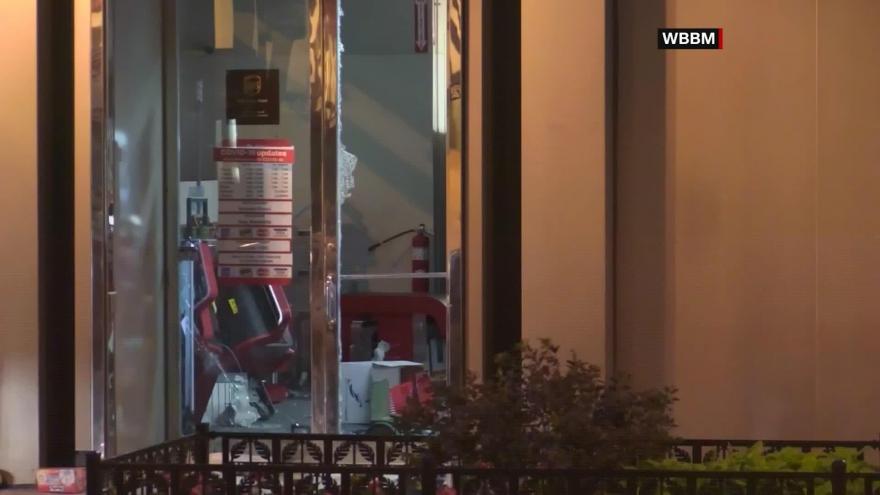 **Embargo: Chicago, IL** More than 100 people were arrested in Chicago after an overnight fit of violence. Those arrested were charged with looting, disorderly conduct, and battery against police.

(CNN) -- More than 100 people were arrested in Chicago after an overnight fit of violence that appears to have begun with police exchanging gunfire with a 20-year-old man, Police Superintendent David Brown said Monday.

This was not a protest, he made clear, dubbing it instead "an incident of pure criminality." Thirteen officers were injured in frays around the city.

Mayor Lori Lightfoot called it "deeply painful" and said it had nothing to do with the First Amendment right to peaceably assemble.

"You have no right to take and destroy the property of others," she said. "We will not let our city be taken over by criminals and vigilantes, no matter who they are and what they're doing."

Those arrested were charged with looting, disorderly conduct, and battery against police, Brown said

Police will maintain a heavy presence downtown until further notice, he said. Officers will work 12-hour shifts, and days off are canceled, the superintendent said.

Bus and train service was suspended at police request, but was restored Monday morning, the Chicago Transit Authority said.

It appears the unrest was born of an officer-involved shooting Sunday, but police brass has said there was a great deal of misinformation regarding the incident.

Chicago police Deputy Chief Yolanda Talley addressed the situation Sunday, well after the crowd took to the streets with "emotions running high." An officer suffered an injured shoulder, and another officer was sprayed with mace in the unrest, she said.

A deputy was hit in the face when someone threw a brick through a squad car window, the Cook County Sheriff's Office said. The deputy went to the hospital, officials said.

"This is a direct response to one agitator on the scene getting people worked up without having the whole story," Talley said.

Police responded to reports of an armed man about 2:30 p.m. (3:30 p.m. ET), and upon arrival attempted to question a 20-year-old man with a previous arrest record, Brown said. He took off, police gave chase, and as the man fled he opened fire on the officers, Brown said.

Officers shot back, hitting him, the police superintendent said. The man was taken to University of Chicago Medical Center and is expected to survive, he said. Three officers were taken to a hospital for observation.

The suspect's gun was recovered at the scene, police said in a statement.

Video taken outside of Saks Fifth Avenue shows armed police officers standing near the entry door. Its glass is broken out, and the security gate inside is partially raised.

Another video shows a large crowd gathered outside a Coach store. Windows are shattered. In a separate video, someone is seen tossing a projectile at a jewelry store window on Michigan Avenue.

Police did not have specific information on the size of the crowd, amount of damage or level of police response, saying only, "This is an ongoing situation."

It wasn't just large chains that were attacked, Lightfoot sad, but also small businesses and restaurants that were already hit hard "by closures related to Covid-19 stores."

"This is a time for us all to step up and we will do just that," she said.