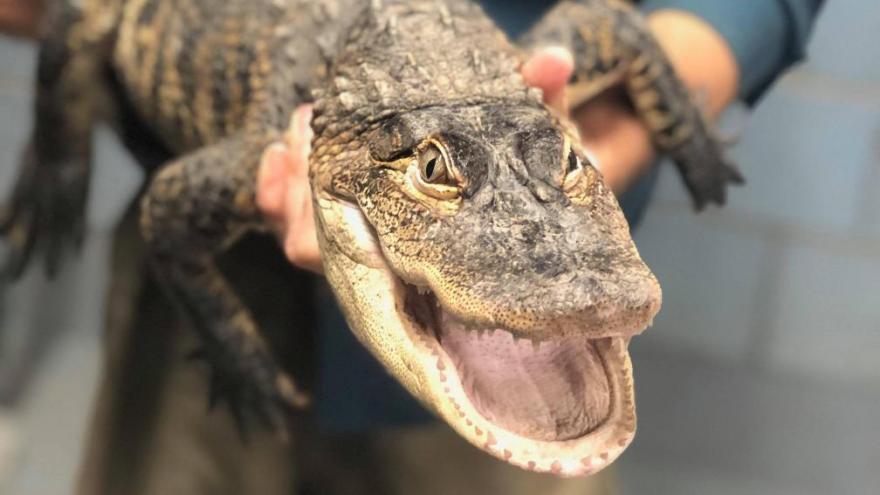 **Embargo: Chicago, IL** A four-foot alligator was captured in the Humboldt Park lagoon on July 16, 2019, a week after it was first spotted in the water.

(CNN) -- One alligator in a Chicago pond is crazy enough. Two may be too much to believe.

Chicago police are investigating after two men claim they found another gator in Humboldt Park Lagoon -- the second in less than two weeks -- and then gave conflicting statements about it. The pair also posted a video to Facebook Live of them with the alligator.

The man who claimed to have caught the animal was holding the three-foot reptile, and there was black tape around its jaws when Chicago park district security responded Saturday night, the police department said in a statement.

On July 16 an alligator dubbed Chance the Snapper was caught at the lagoon after being on the loose in the park for almost a week, forcing a partial shutdown of the site on Chicago's northwest side.

Police said they contacted Frank Robb, the alligator expert from Florida who caught Chance, who told them he thought Saturday's alligator was a "juvenile and could not have been in the lagoon for any period of time." Robb also told police that his investigation found only the one alligator, Chance.

"Based on the inconsistencies and information provided by Frank Robb the subjects were taken into custody on scene," the police said.

One of the men detained Saturday had been in touch with Robb on social media during and after the search for Chance the Snapper, police said, making comments "indicating he and his brother almost had caught" the five-foot alligator.

The two men were released pending further investigation "into the validity of this incident," police said.

The second alligator was turned over to animal control.