Chicago orders some teachers to resume in-person classes next week, setting up showdown with union 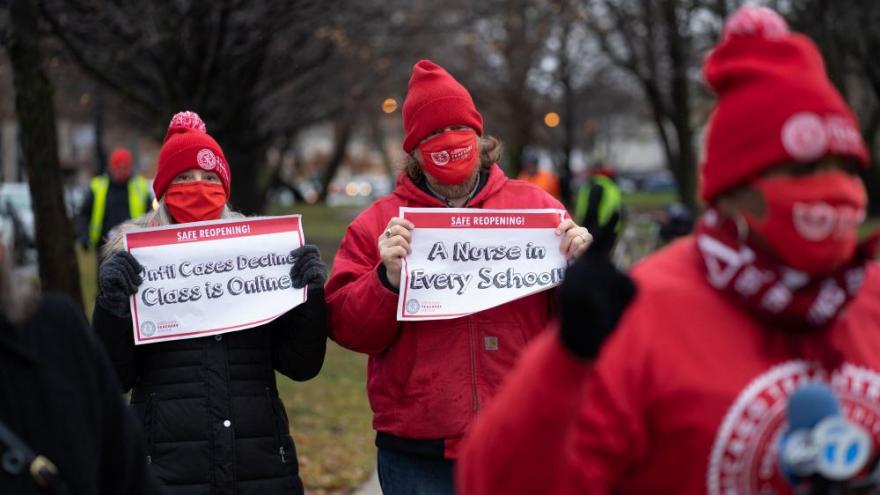 Chicago Public Schools ordered some teachers back to work in person Monday. In this image, Chicago Teachers Union members expressed concern at a December gathering about returning to in-person teaching too soon.

(CNN) -- Chicago may be closer to a teacher strike after Chicago Public Schools ordered some teachers back to work in person Monday.

Mayor Lori Lightfoot and Chicago Public Schools said they had made their "last, best, and final offer" after a slew of meetings with union representatives. The Chicago Teachers Union responded that the leaders had "walked away from the bargain table again."

CPS and the City of Chicago have been negotiating with the teachers union for weeks about returning to in-person learning during the pandemic. The union has maintained it is not yet safe.

Lightfoot and CPS Chief Executive Janice Jackson told teachers in a letter Friday night that any teacher who didn't show up for work Monday would be shut out of the schools' online systems.

Lightfoot and CPS said they have met with the union more than 80 times, with daily meetings for the past month.

"We have put everything on the table to reach a deal that protects our students and staff and supports the families who need an alternative to remote learning," the letter said.

In the revised plan, K-fifth grade will return to in-person learning February 22, and sixth through eighth grades will return March 1.

According to a statement from the teachers' union earlier Friday, the mayor agreed to pause in-person learning only if there were Covid-19 outbreaks in 50% of school buildings at the same time.