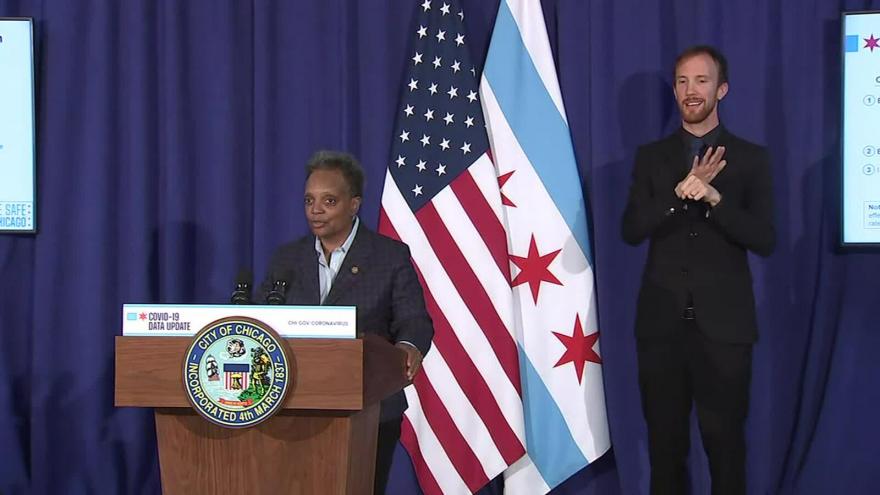 Chicago Mayor Lori Lightfoot unveils changes to search warrant policy in the fallout of a botched raid on a social worker's home. Officers swept through the home of Anjanette Young, guns drawn expecting to find a felon with a gun while she stands naked and distraught in her living room.

(CNN) -- Chicago Mayor Lori Lightfoot and city officials unveiled a series of proposals to reform the city's policy and procedures on search warrants in the fallout of a botched raid on the home of a social worker in 2019.

Lightfoot, along with Chicago Police Superintendent David Brown, emphasized that the proposal requires that any individual who is at a location subjected to a search warrant must be treated with "dignity and respect."

It's the latest example of a city making changes to its search warrant policy after the police killing of Breonna Taylor, who was shot and killed by Louisville police officers executing a no-knock warrant at her apartment nearly one year ago. Taylor's death has prompted cities across the country to move to ban or rein in no-knock, forcible-entry raids frequently used to serve narcotics search warrants.

Chicago has been under fire since its Police Department executed a mistaken raid in February 2019 on the home of Anjanette Young, who stood naked and handcuffed in her living room as officers searched her residence with guns drawn. In December 2020, Lightfoot released body camera footage from the officers involved in the encounter.

The warrant of Young's home was approved by the Cook County State's Attorney's Office and a county judge. A review revealed that the warrant was based on bad testimony from an informant who pointed out the door of Young's home and swore that they had seen the suspect of the warrant with a gun and ammunition inside.

"What Ms. Young experienced continues to be traumatic and disturbing for all Chicagoans of goodwill, but especially for Black folks and people of color here in Chicago and across the country," Lightfoot said on Wednesday. "That video resonated wide and far."

Under the proposed changes, which will undergo a 15-day period for community feedback prior to being finalized, no-knock warrants will be banned from use "except in specific cases where lives or safety are in danger."

A planning session would identify any potentially "vulnerable" people, such as children, who may be at the location. The warrants would only be authorized by a bureau chief or higher and executed by SWAT members.

Additionally, a lieutenant — rather than the current rank of sergeant — must be on the scene while a search warrant is being executed, as well as a female officer, the mayor said.

If a search warrant takes place at the wrong location, which the city defines as a "wrong raid," a complaint will be logged and the police department will conduct a "critical incident after-action review," according to the new policy.

The proposed changes announced on Wednesday would make it mandatory for people who believe they have been victimized by Chicago police officers to have access to video and audio from the incident.

Lightfoot said the new policy will "build upon ongoing reform efforts to ensure that the values of transparency, accountability and fundamental respect for human dignity are reflected whenever a search warrant is issued and served."

"It's always the right time to do the right thing," said Superintendent Brown. "We should always be evolving to improve our policy's training and accountability."

In a statement, Keenan Saulter, an attorney for Young, said the mayor's plan "falls woefully short of the types of reforms that the citizens of Chicago require to feel secure in their homes from these violent and often wrongful raids."

"The Mayor's efforts do not go far enough, because CPD's raid of Ms. Young's home is not an anomaly," Saulter said. Noting investigative reporting by CNN affiliate WBBM in a statement, Saulter said of Young's raid, "it is just one egregious example of a documented pattern of illegal, violent, and dehumanizing raids that have traumatized thousands of Black and Brown families, for which CPD has failed to hold a single officer to account."

The mayor announced in December that the officers involved in the raid were "taken off the street" and moved to desk duty.

Young filed a civil rights lawsuit against the city in 2019 and requested that the city release videos of the incident through the Freedom of Information Act, which was denied.

A judge dismissed Young's lawsuit against the city following a request by her lawyer. Lightfoot's administration also asked a judge to dismiss the lawsuit, but the judge ruled on Young's request, allowing her attorney to pursue the matter again in federal court.

Young filed another lawsuit against the city and the officers involved in February, claiming that the mayor and other city officials tried to cover up the human rights violations during the raid by denying the release of the body camera footage.

The mayor's office said Wednesday in a statement that Lightfoot has "made clear that there must be full accountability for the actions of all involved in the incident as well as the City's response."