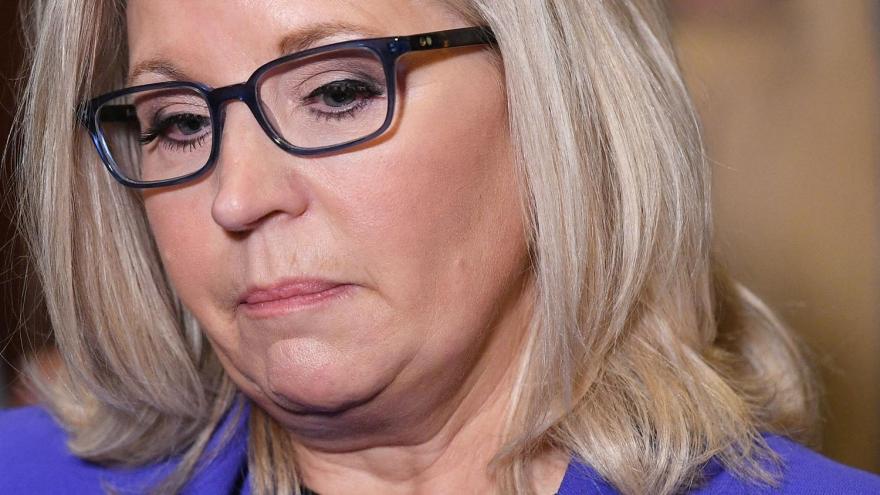 Rep. Liz Cheney said Friday that her role as a member of Congress obligated her to oppose the widespread lie of fraud in the 2020 election. Cheney is shown here at the US Capitol in Washington, DC, on May 12, 2021.

(CNN) -- Wyoming Republican Rep. Liz Cheney, whose criticism of former President Donald Trump led to her ouster from House Republican leadership, said Friday that several Republican members of Congress had voted against impeaching Trump out of fear for their own lives.

Telling CNN's Jake Tapper on "The Lead" that there are "more members who believe in substance and policy and ideals than are willing to say so," Cheney cited the impeachment vote earlier this year, in which she was one of only 10 House Republicans who voted to hold Trump accountable for the Capitol riot.

"If you look at the vote to impeach, for example, there were members who told me that they were afraid for their own security -- afraid, in some instances, for their lives," she said. "And that tells you something about where we are as a country, that members of Congress aren't able to cast votes, or feel that they can't, because of their own security."

Hours earlier on Friday, New York Republican Rep. Elise Stefanik, a vocal ally of the former President who has a less conservative voting record than Cheney, was elected House GOP conference chairwoman. The key difference between the two women is that Stefanik has supported Trump's baseless claims of widespread fraud in the 2020 election while Cheney has repeatedly rebutted them, leading House Republicans to complain that the Wyoming Republican is undermining the party's message of promoting Trump's brand of politics.

Cheney said her role as a member of Congress obligated her to oppose the widespread lie of fraud in the election and she believes that "we've had a collapse of truth in this country."

"We've seen an evolution of, you know, a general situation where conspiracy theories are rampant, where good people in a lot of instances have been misled and believe things that are not true," Cheney continued. "And so, I think that we all have an obligation to make sure we're doing everything we can to convey the truth, to stand for the truth and to stand for the Constitution and our obligations."

Trump and his lies seeking to undermine the federal election system are an "ongoing danger" to the country, Cheney said.

"He may try, but he won't succeed," she said when asked if she thought Trump would try in 2024 to purge from the party people like her and Georgia Secretary of State Brad Raffensperger, who was adamant in defending the results of the presidential election as well as the integrity of the state's voting system.

She pointed to "the role individuals have to play in defending the system, and how important that is -- our system held, the institutions held. There's an ongoing danger and we've got to continue to stand up against it."

Cheney, who did not attend Friday's meeting to vote on her successor, also told Tapper that she would have voted for Stefanik's only competitor, Texas Republican Rep. Chip Roy.

In an interview with ABC News set to air in full on Sunday, Cheney was asked what it means for the Republican Party to have replaced her with Stefanik, who has promoted Trump's falsehoods about the election.

"I think it's dangerous," Cheney replied. "I think that we have to recognize how quickly things can unravel."

"We have to recognize what it means for the nation to have a former President who has not conceded and who continues to suggest that our electoral system cannot function, cannot do the will of the people," she said.

Cheney also told ABC News that she regrets voting for Trump in 2020.