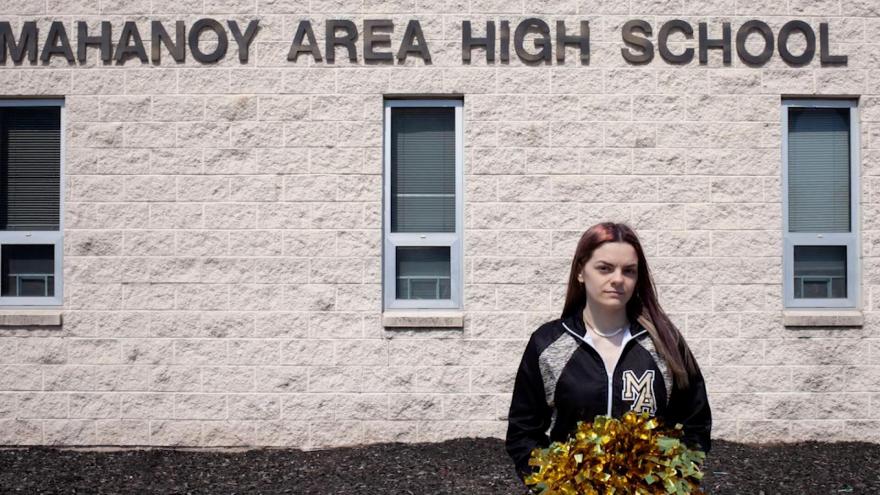 Cheerleader Brandi Levy is at the center of a Supreme Court fight. The nine justices will review her case and consider the authority of public school officials to discipline students for what they say outside of school.

(CNN) -- When cheerleader Brandi Levy posted a Snapchat of herself giving the middle digit salute with a profanity-laced caption, she likely never thought she'd become the center of a Supreme Court fight.

On Wednesday, however, the nine justices will review her case and consider the authority of public school officials to discipline students for what they say outside of school.

The dispute in the age of social media and amid the complexities of Covid-remote learning environments could shape the free speech rights of millions of young students across the country when they speak off campus.

"F--k school f--k softball f--k cheer f--k everything" Levy, then 14, wrote in 2017. She was reacting to the fact that as a junior varsity cheerleader she had failed to get a spot on the varsity squad at Mahanoy Area High School in Mahanoy City, Pennsylvania.

When school officials learned of the outburst, Levy was suspended from the JV team for having violated school rules. But her lawyers sued, alleging the school had violated her freedom of speech. Levy is now 18 and a freshman at Bloomsburg University.

In an interview with CNN's Michael Smerconish broadcast earlier this year, Levy said that her speech "wasn't on school grounds, and I wasn't in any school attire." She said she was aware of rules about her cheerleading squad but said they didn't say anything about what she could or couldn't say out of school or out of uniform.

Vic Walczak, legal director of the American Civil Liberties Union of Pennsylvania, said the case is about the free speech rights of 50 million public school children.

"It's not just about whether or not you can have a profane rant on a weekend, but it's about whether schools are going to be able to punish kids for saying things that are controversial, unpopular, or even just critical of the school," Walczak said on CNN's "New Day" Tuesday.

"It's really important for kids to have full free speech rights some place in their lives," he added. "And that some place has to be when they're outside the authority of the school."

Levy's case has drawn an array of friend-of-the-court briefs, including one from Mary Beth and John Tinker who won a landmark school speech case back in 1969 that allowed them to wear a black armband on campus to protest the Vietnam war.

The court held then that students do not shed "their constitutional rights to freedom of speech or expression at the schoolhouse gate."

The Biden administration, meanwhile, is siding with the school district, arguing that there is some speech that "intentionally targets specific school functions" that warrant discipline even if it occurs off campus.

Acting Solicitor General Elizabeth Prelogar said that a categorical rule banning schools from disciplining students for some off campus speech could "substantially undermine efforts by schools to address harassment and bullying, much of which might take place off campus but which nevertheless could deprive victims of equal educational opportunities."

Levy won in the lower courts. The district court found that the school had not shown that she waived her speech rights as a condition of joining the cheerleading team. A federal appeals court affirmed, relying on the fact that the speech hadn't occurred in the campus environment which would include school sponsored events and field trips. The court stressed that its holding didn't impact a line of cases involving off campus student speech that threatens violence or harasses particular students or teachers. The court said that such speech would "no doubt raise different concerns and require consideration of other lines of First Amendment law."

Lisa Blatt, a lawyer for the Mahanoy Area School District, countered in court papers that "every day, schools face hard calls about how to address off campus speech, which requires balancing students' First Amendment rights with the special needs" of the schools.

The "answer under the First Amendment should not be to force schools to ignore student speech that upends the campus environment simply because that speech originated off campus," the district adds.

Instead, the line should be drawn not based on where the speech occurred, but on whether it causes a substantial disruption, Blatt argues.

"But the First Amendment is not a territorial straitjacket that forces schools to ignore speech that disrupts the school environment or invades other students' rights just because students launched that speech from five feet outside the schoolhouse gate," Blatt argued.

Back in 1969, the Supreme Court ruled in favor of the Tinkers. But the justices also took into consideration the special characteristics of a school environment and said that public school officials could regulate speech that would "materially and substantially interfere with the requirements of appropriate discipline in the operation of the school."

But that decision concerned speech in the school environment. The question now is whether it will be expanded to apply to student speech that occurs off campus.