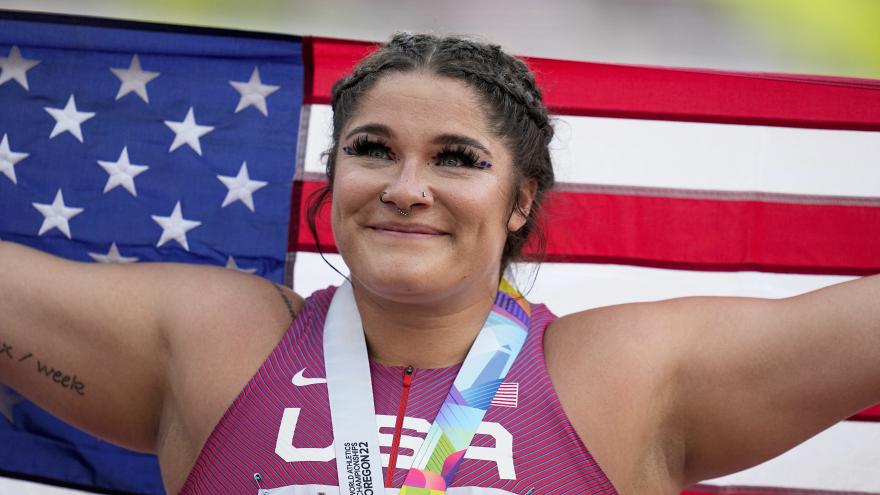 (CNN) -- Chase Ealey made history on Saturday night as she became the first American woman to win the shot put world title at the World Athletics Championships.

At the competition in Eugene, Oregon, Ealey took the lead on the first attempt of the six finals rounds with a throw of 20.49 meters to win the gold medal. According to Olympic sport historian Bill Mallon, she is the first woman's shot put world champion to win on the first attempt.

Two-time defending champion and reigning Olympic gold medalist Gong Lijiao of China won a silver medal with a throw of 20.39 meters. The Netherlands' Jessica Schilder won the bronze with a throw of 19.77 meters.

Gong was looking for a third successive world title, getting closer and closer through each of the rounds. After finishing with a throw of 20.39 meters on her second to last attempt, the Chinese national had one final chance to take the gold but ultimately missed out after corking out a 19.89-meter throw.

Ealey's victory on Saturday, was the first of two world titles for the United States at the World Championships this year.

Last month, Ealey, 27, set a USA Track and Field Outdoor Championships record with a throw of 20.51 meters to win the national championship. She did not compete at the Olympic Games in Tokyo last year, after finishing in fifth at the USA Olympic trials to miss making the team.

The World Athletic Championships, being held in the United States for the first time ever, conclude July 24.