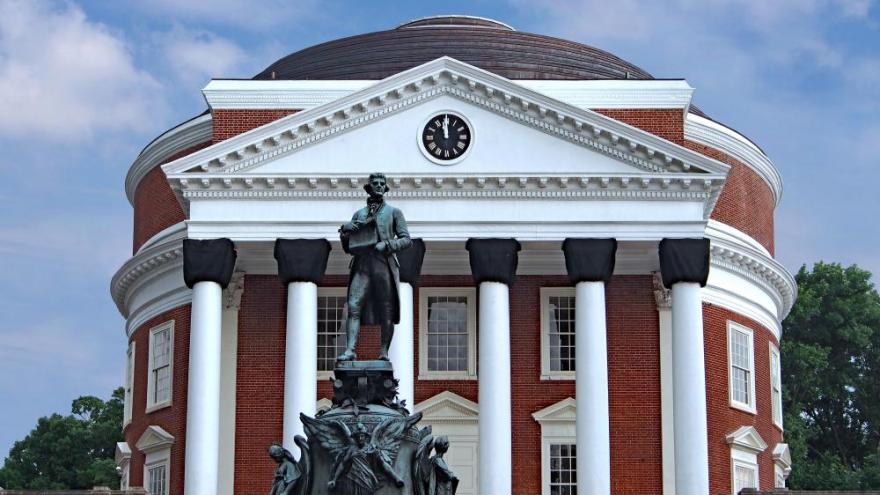 For the first time since World War II, the city where Thomas Jefferson once called home is no longer considering his birthday an official holiday. A statue of Thomas Jefferson in Charlottesville, Virginia.

(CNN) -- For the first time since World War II, the city where Thomas Jefferson once called home is no longer considering his birthday an official holiday.

Instead, the city of Charlottesville, Virginia, has replaced celebrating Jefferson's birthday with a new holiday -- Liberation and Freedom Day -- to mark the beginning of emancipation for 14,000 enslaved residents.

On March 3, Charlottesville commemorates the day Union troops arrived in 1865 at the end of the Civil War when city officials surrendered and the slaves were freed.

While Liberation and Freedom Day has been celebrated since 2017 when the Charlottesville City Council declared it a holiday, this is the first year Jefferson's birthday on April 13 will not be officially celebrated. Councilors voted 4-1 to remove his birthday as a holiday in June 2019.

The city celebrates Liberation and Freedom Day from March 1-8, with a week-long schedule of events ranging from vigils and community dinners to concerts and panel discussions.

"We're not going to forget Mr. Jefferson. His name adorns streets, parks, endowed chairs at the university, lecture halls and he's just all over the place," Jalane Schmidt, a University of Virginia professor and one of the event organizers, told CNN. "But we prioritize the emancipation of slaves over his birthday."

Finding something worth celebrating

Although Jefferson served as America's third president, authored the Declaration of Independence, and founded the University of Virginia,he was also a slave owner.

"It's very hard to expect us to celebrate an individual who said black people didn't have the ability to emote, that we smelled very vile, an individual who raped Sally Hemings and other slaves, and was just a treacherous slave owner," former city councilor Wes Bellamy told CNN.

"It's difficult to celebrate his birthday and at the same time celebrate the day in which enslaved Africans were set free. It doesn't go hand in hand with the city and the representation of what we're trying to do to move forward."

Bellamy, now the chairman of the political science department at Virginia State University, wrote the original resolution to celebrate Liberation and Freedom Day and voted in favor of removing Jefferson's birthday as an official holiday.

The decision was easy, but it came with a price, he said. Bellamy received death threats and both he and his family were harassed for his decision, but he said he had no regrets.

"It's important to be patient with people and impatient with progress. We'll have to wait for people to realize on their own time how painful and hurtful his actions were on our people," Bellamy said.

"I'm sorry they feel offended and think this is disgraceful, but as a community, we are not going to celebrate a white supremacist. You can see a person's best qualities when you have the privilege to take advantage of the things they put in place. But for those of us who have been on the shorter end of the stick, there's nothing about him worth being celebrated."

Standing on the right side of history

One of the catalysts behind the city's effort to remove Jefferson's birthday as a holiday, Bellamy said, was Charlottesville's white supremacist "Unite the Right" rally in 2017 that left one person dead after a man who drove into a crowd of counterprotesters.

"We're setting an example," Bellamy said. "It's terrible that someone had to lose their life and we had to have a white supremacist rally in Charlottesville to finally open peoples' eyes, but what we're most proud of is that our community and our city is not just standing idle. We're doing something about it. We're paving the path for other localities to take the same action."

Heather Heyer, a 32-year-old paralegal, was killed at the August 2017 "Unite the Right" rally when a man drove his vehicle into a crowd of counterprotesters. More than two dozen people were injured. White nationalists, neo-Nazis and other groups opposed to the city's decision to remove a statue of Confederate Gen. Robert E. Lee had descended on the city for a day of violent clashes.

The killer, James A. Fields Jr., was sentenced to life in prison in a federal hate crimes case.

Another reason the decision to replace Jefferson's birthday with Liberation and Freedom Day is to correct the way Charlottesville is narrating its history, according to Schmidt, the professor and event organizer.

"The history of the Civil War is being suppressed in Charlottesville. With all the confederate statues and monuments everywhere you would think the confederates won, but they didn't," Schmidt said. "We need to tell the real story instead of these monuments lying about our history. We need to celebrate freedom and liberation."

During the Civil War, over 50 percent of the city's entire population was enslaved. While the spirits of Thomas Jefferson and other confederate leaders will always remain in Charlottesville, today -- and now forever -- they will not be the only ones remembered.