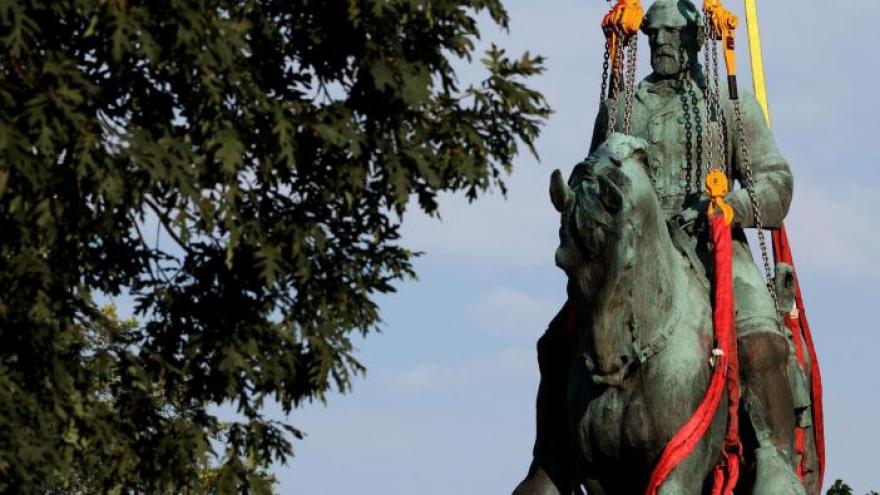 (CNN) -- Bronze statues of two Confederate generals were removed on Saturday from public property in Charlottesville, Virginia, almost four years after they were a flashpoint for a violent "Unite the Right" rally that left one person dead.

A crowd that gathered to watch clapped and cheered both times.

Both statues will be placed in storage. The stone bases will be left in place and removed later.

"(Removing the statues) is one small step closer to the goal of helping Charlottesville, Virginia, and America grapple with its sin of being willing to destroy Black people for economic gains," Mayor Nikuyah Walker told reporters shortly before the Lee statue was lifted.

"It is my hope that we stop taking these steps in 100-year increments and increase the frequency (of) bold daily action and critical examination of accurate history, even when it denounces whiteness as supreme," she said.

The city said it is looking for a new home for the statues at a museum, military battlefield or historical society. The city has received 10 expressions of interest -- six from out of state and four in Virginia, the news release said.

The City Council voted June 7 to remove the statues following a court battle of more than three years.

In 2016, then-high school student Zyahna Bryant started a petition to get the statues removed. On Saturday, at the news conference with the mayor, Bryant called the removals well overdue.

"This should have happened a long time ago," Bryant said.

"To the young people out there, I hope that this empowers you to pick up on the issues that matter, and to take charge in your own cities and communities," Bryant added.

The council first voted in February 2017 to remove the statues, a decision that sparked the anger of Virginians with Confederate roots and White nationalist groups.

The "Unite the Right" rallies of August 11-12, 2017, brought thousands of protesters to Charlottesville, many bearing Confederate and neo-Nazi symbolism, to protest the removal of the statues.

One White supremacist killed a counterprotester, Heather Heyer, and injured 19 others when he plowed his car into a crowd. Many more were injured in separate incidents during the weekend rally.

In October 2017, two months after the rally, a circuit court judge ruled against removing the statues from public spaces, saying that they were protected by a state statute that barred the removal of "memorials and monuments to past wars," court documents show.

But in April 2021, the Supreme Court of Virginia overturned that decision. Both monuments were erected in the 1920s but the state law protecting monuments was enacted in 1997, and "had no retroactive applicability and did not apply to statues erected by independent cities prior to 1997," the opinion reads.