Changes are coming to the nation's largest Confederate monument. Are they enough? 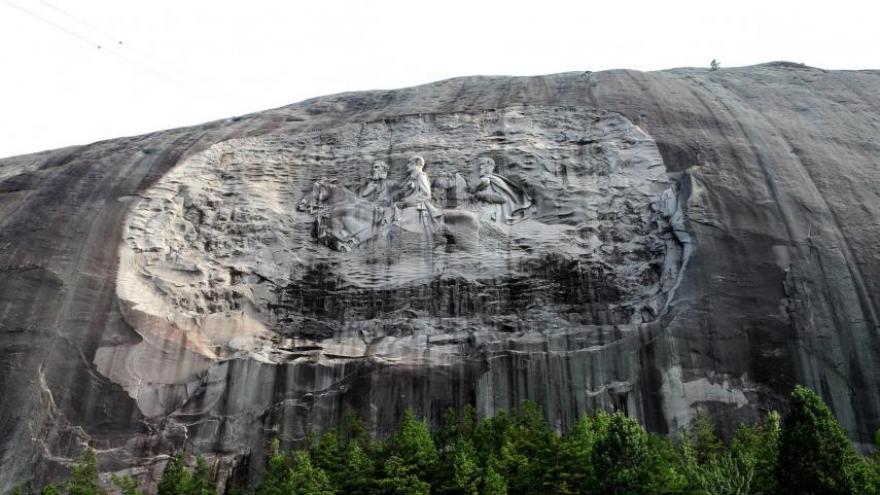 Changes announced this week at Georgia's Stone Mountain Park, home to the nation's largest Confederate monument, are "the boldest step that has been taken" at the park since the state bought it decades ago, according to a park official.

(CNN) -- Changes announced last week at Georgia's Stone Mountain Park, home to the nation's largest Confederate monument, are "the boldest step that has been taken" at the park since the state bought it decades ago, according to a park official.

The park's board last Monday voted -- unanimously, but with one abstention, according to its chairman -- to add an exhibit to an existing museum that will tell "the whole story" of the monument -- a giant carving of Confederate leaders on horseback -- including the history of the Ku Klux Klan on the mountain and its rebirth there in 1915, among other things.

"We took the appropriate actions, and it's the boldest step that has been taken at Stone Mountain Park since the park was acquired in 1962," said Bill Stephens, the CEO of the Stone Mountain Memorial Association (SMMA), which oversees the park, about 15 miles east of Atlanta. "There have been virtually no changes to the Confederate imagery or anything since that time, and now we're moving forward."

But critics remain as unmoved as the granite the monument is carved into. They say the changes are tinkering on the edges, especially in the wake of George Floyd's murder and renewed calls for the removal of Confederate monuments and symbols around the country.

"They're really much ado about nothing," said Richard Rose, president of Atlanta's NAACP. "These changes don't mean anything."

"We see what they've done as completely superficial," said Dennis Collard, an attorney and founding member of Stone Mountain Action Coalition, a group that was founded last year to bring about change at the park.

The board also voted to move Confederate flags -- the battle flag among them -- from their current heavily trafficked spot at the base of the trail leading up to the mountain top -- to a more obscure location, and to remove the Confederate carving from the SMMA's logo.

"It's nothing more than moving some chess pieces around the park, if you will," said Collard. "When what really needs to happen is the Confederacy and Stone Mountain Park need to be divorced from each other."

"There was a lot of anger," when the changes were announced, Collard said. That's not surprising, given that the mountain, Georgia's biggest tourist attraction, elicits strong emotions from people on both sides of the argument for and against the monument.

Stacey Abrams, the 2018 Democratic candidate for Georgia governor, tweeted in 2017 that the carving "remains a blight on our state and should be removed."

The carving is currently protected, though, by Georgia law, which states that "the memorial to the heroes of the Confederate States of America graven upon the face of Stone Mountain shall never be altered, removed, concealed, or obscured in any fashion and shall be preserved and protected for all time as a tribute to the bravery and heroism of the citizens of this state who suffered and died in their cause."

But it's not just the carving, which depicts Jefferson Davis, president of the Confederacy during the Civil War, and Generals Robert E. Lee and Thomas "Stonewall" Jackson. Streets in the park are named after the three, and next to the flags stands Confederate Hall, which has science exhibits, classrooms and documentaries about the war. A lake in the park is named after the family that owned it when the Ku Klux Klan met there regularly.

"You're not going to be able to please everybody, but we are trying to at least come to some type of common ground where we can all get along," said SMMA Chairman Rev. Abraham Mosley, the first Black man to lead the association.

Mosley has been friends with Gov. Brian Kemp, a Republican, for about 30 years, he said, and has known Kemp's wife about 10 years more than that. Kemp asked him to chair the association, he said, and Mosley assumed the position last month.

"I'm happy with the start," Mosley said of the changes at the park. "In order to walk a mile, you've got to take that first step. We've been in a rut for a long time."

What cannot be overlooked is the financial impetus for change at Stone Mountain Park. Revenue fell about 60% last year, from about $59 million in 2019 to about $22 million in 2020, CEO Stephens said.

"It's hard to quantify exactly a number," of the loss the Confederacy issue is causing and what can be attributed to the Covid-19 pandemic, Stephens said.

"I can tell you that we've lost business from major corporations that used to do business with our hotels and come to the park for gatherings, that they no longer do so due to the Confederacy issue," the CEO said.

Herschend Family Entertainment, the company that runs the entertainment and hotel operations at the park, has given notice that it's pulling out of its decades-old partnership with the park as of August 2022, and Marriott, which operates two hotels at the park, is leaving at the same time, Stephens said.

"Part of the reason was the Confederacy issue, with some of the protests and other things that we've had here at the park," Stephens said. "That creates economic reasons as well."

The mountain was the site of many Ku Klux Klan meetings over the years from around 1915 until the state bought the property in 1958, the SMMA said this week, and it has since been a regular gathering place for White supremacist group rallies. And that brings groups that oppose them.

Some of these gatherings have been carefully managed, with police in riot gear separating opposing groups that included people openly carrying firearms. And some planned gatherings have moved the park to close altogether for the day.

The Sons of Confederate Veterans

But economics was not the only reason for the change, Stephens, a former Georgia representative, said.

"It's just the right thing to do. It's where we are in society, and our board feels strongly that changes need to be made, for not just economic reasons."

Martin O'Toole, a spokesman for the Georgia division of the Sons of Confederate Veterans, says that other entertainment venues suffered even more financially last year than the park did.

"Prior to Covid coming on, they weren't having an attendance problem," O'Toole said of the park. "So what I think they're trying to do is, they're trying to bootstrap Covid as an opportunity for them to censure."

The Georgia division of the SCV has a whole section of its website devoted to the park and its vision for a heritage park, something like Williamsburg, with actors in period costume and reenactors in uniform.

For the Sons of the Confederacy, the symbols at the park represent "the sacrifices of the people in the South during the war, and both those who were serving in the military, such as my ancestor who went to Elmira prison," a Union prisoner of war camp in New York, O'Toole said, and other relatives had their houses burned down and their property destroyed.

But as historians and critics point out, Stone Mountain's history has nothing to do with the Civil War. No significant battles were fought there. The disputed carving was started in 1915 by Gutzon Borglum, the sculptor who went on to create Mount Rushmore. The carving was worked on off and on over the years, but it wasn't finished until 1970.

"Those carvings relate to the fact that the Ku Klux Klan started meeting there," said Rose. He pointed out that C. Helen Plane, a member of the United Daughters of the Confederacy who proposed a Confederate monument on the mountain in 1915, had wanted members of the Klan depicted on the carving.

"Since seeing this wonderful and beautiful picture of Reconstruction in the South, I feel that it is due to the Ku Klux Klan which saved us from Negro domination and carpet-bag rule, that it be immortalized on Stone Mountain," Plane wrote. "Why not represent a small group of them in their nightly uniform approaching in the distance?"

The idea for the carving came during the height of the "Lost Cause" period in Georgia. White Southerners argued that states' rights, rather than slavery, was the impetus for the men in the carving to take up arms against the federal government during the Civil War.

Historians say documents from the time of the war show Southern politicians believed their motivation was preserving slavery.

Rose and historians have pointed out that with every small step of civil rights for Blacks -- during the Brown vs. Board of Education, for example, efforts were put into work on the carving.

The monument, Rose said, "Is just an exercise in White supremacy."

"They continue this charade with claiming some memorial, some connection with honorarium of the Confederacy. It's really an honorarium to White supremacy."

For Mosley, who chairs the association tasked by state law with maintaining an "appropriate and suitable" memorial to the Confederacy, Stone Mountain would be "just a big rock" without the carving.

"So tell its story, the good and the bad," Mosley said.