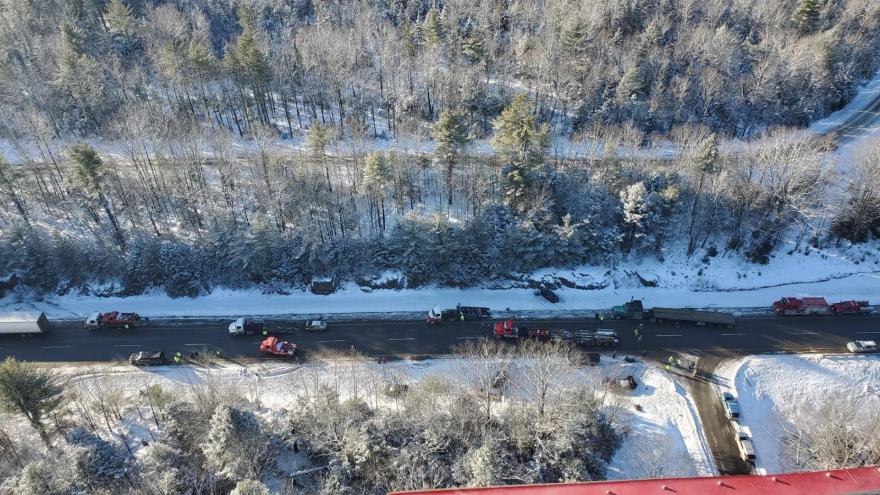 Emergency medical helicopters were dispatched to an accident involving more than two dozen vehicles on Interstate 95 in Carmel, the Maine State Police said.

(CNN) -- An accident involving more than two dozen vehicles shut down part of Interstate 95 on Tuesday in Carmel, the Maine State Police said.

Hundreds of motorists were stranded behind the crash for about four hours, as the northbound lanes of I-95 were closed until shortly before noon, according to CNN affiliate WABI.

The early stages of the investigation indicate "blinding sun" may have caused the initial accident around 7:45 a.m., causing a "chain reaction crash" involving about 30 vehicles, police said.

The crash occurred near mile marker 174, and traffic was diverted at exit 157 in Newport, police said. Carmel is located about 15 miles west of Bangor.

There were injuries, police say, but it wasn't immediately clear how many people were hurt or how badly.

Besides "multiple wreckers" being dispatched from the Bangor area, Maine Forest Rangers and LifeFlight of Maine sent helicopters to the scene, according to police and WABI.

A WABI reporter tweeted video of one of the choppers landing near the site. According to state police, a LifeFlight helicopter landed on the highway north of the crash to transport a seriously injured victim to a Bangor hospital.

Four state forest rangers responded to the scene "assisting with first-aid, traffic control and scene stabilization," the agency said in a tweet.

The initial report from police said as many as 60 vehicles were involved, but the tally was cut in half in a later update.