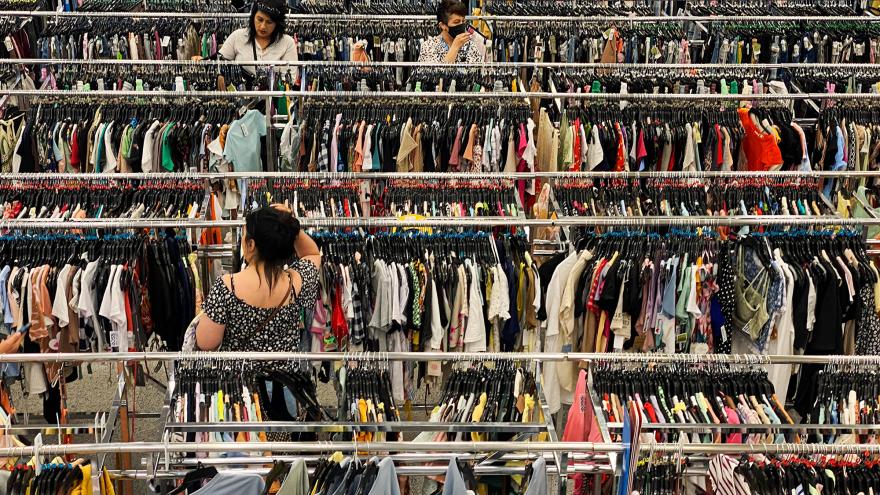 (CNN) -- Despite all the buzz about the "Great Resignation" and a renaissance for the working classes in America, a new report finds the gap between executive and worker pay is only widening.

The typical low-wage worker's pay didn't keep pace with inflation last year at more than a third of the companies reviewed by the Institute for Policy Studies, a progressive think tank. IPS' survey included the 300 publicly traded companies with the lowest median pay for workers.

Consumer prices have spiraled up to 40-year highs above 8% this spring. While many workers have seen fatter paychecks as a result, few have managed to keep pace with inflation -- a dynamic that's frustrating consumers and starting to weigh on spending.

When the pandemic hit in 2020, "corporate boards zealously protected their much more than ample CEO paychecks, even as their workers lost jobs, income, and lives," researchers wrote. In 2021, "corporate leaders shifted to new CEO pay-inflating tactics," including spending billions on stock buybacks and inflating prices of consumer goods to maintain wide profit margins, the report says.

Last year, companies in the S&P 500 repurchased a record $882 billion of their own shares. That number is on track to reach $1 trillion in 2022, according to Goldman Sachs.

At the 106 companies where researchers found median worker pay did not keep pace with the 2021 inflation rate of 4.7%, 67 spent on stock buybacks, a controversial maneuver that inflates a company's share price, and, consequently, juices executive pay. They've been a thorny issue since they were legalized in 1982 — prior to that, they were considered stock manipulation.

The White House has proposed new rules intended to curb stock buybacks as part of its $5.8 trillion budget released in March, but those changes are unlikely to win bipartisan support.

CEO pay is always top tier, but the widening gap between executives and their workers has come under growing scrutiny from progressive lawmakers.

During the first year of the pandemic, CEO pay overall jumped 19% — even as many of their businesses ground to a halt, according to the Economic Policy Institute, which tracks 350 of the largest US companies. The latest EPI report shows top CEOs were paid 351 times as much as a typical worker in 2020.

Critics say the pay gap not only about bad optics — it's also bad for business.

"I think most Americans are outraged because they just see it as fundamentally unfair, but there's also a very strong business argument that these extreme gaps are demoralizing for workers," says Anderson, who co-authored the IPS report. "When so many companies are facing staffing challenges and unionization, why wouldn't they look at trying to address these gaps as a way to have more peaceful and productive relations with their employees?"

The report urges President Biden to wield executive power to roll out new standards for federal contractors that would make it hard for companies with huge CEO-worker pay gaps to land lucrative federal contracts.