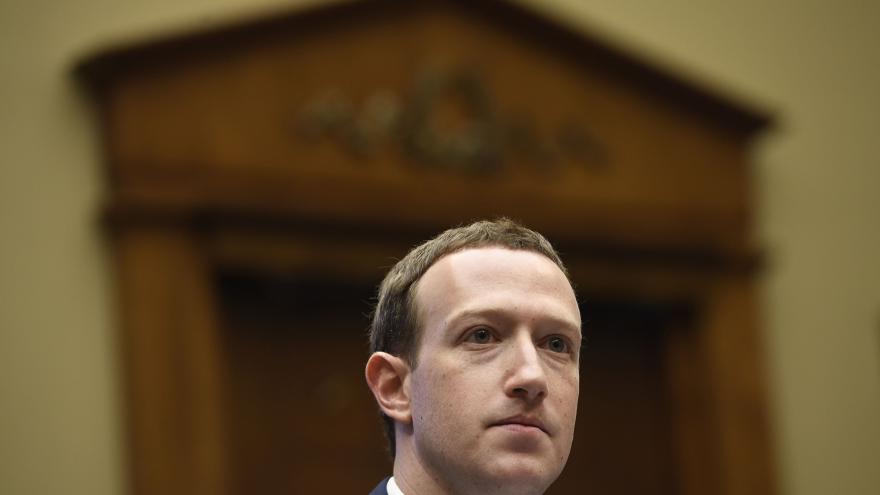 (CNN) -- CEO Mark Zuckerberg kicked off Facebook's quarterly earnings call by addressing the latest wave of coverage based on a trove of leaked internal documents on Monday.

"Good faith criticism helps us get better, but my view is that we are seeing a coordinated effort to selectively use leaked documents to paint a false picture of our company," Zuckerberg said. "The reality is that we have an open culture that encourages discussion and research on our work so we can make progress on many complex issues that are not specific to just us."

The company's results come amid perhaps the biggest crisis in the social media giant's 17-year history. Tens of thousands of pages of internal documents leaked by whistleblower Frances Haugen informed the Wall Street Journal's "Facebook Files" series, and on Monday, a flood of additional news coverage by a consortium of 17 US news organizations, as well as hearings with US and UK lawmakers. The documents provide the deepest look yet at many of Facebook's biggest problems, including its struggles to regulate hate speech and misinformation, the use of its platform by human traffickers, research on harms to young people and more.

Facebook has pushed back on many of the reports, saying they are misleading and mischaracterize its research and actions. Zuckerberg last commented on the situation following Haugen's Senate hearing earlier this month, in a statement in which he tried to discredit the whistleblower. Still, on Friday, another former Facebook employee anonymously filed a complaint against the company to the SEC, with allegations similar to Haugen's.

But despite all the bad headlines, the company reminded investors on Monday that it continues to be a money-making machine.

Facebook reported $29 billion in revenue for the three months ended in September, up 35% from the same period a year earlier. The company posted nearly $9.2 billion in profit, up 17% from the year prior. The number of people using Facebook's family of apps grew 12% year-over-year, to nearly 3.6 billion during the quarter.

The results were nearly in line with Wall Street analysts' projections. Facebook's stock rose as much as 3% in after-hours trading Monday following the earnings report, before falling to around 1% higher.

Facebook is no stranger to PR crises. And in most cases, Facebook's business has continued to chug along at a healthy clip despite outcry from regulators and the public.

But this time could be different. Facebook's massive ad business is already in a vulnerable state because of recent changes to Apple's app tracking rules. Apple's iOS 14.5 software update, which went into effect in April, requires that users give explicit permission for apps to track their behavior and sell their personal data, such as age, location, spending habits and health information, to advertisers. Facebook has aggressively pushed back against the changes and warned investors last year that the update could hurt its business if many users opt out of tracking.

On Monday, Facebook warned that the iOS 14 changes could create "continued headwinds" in the fourth quarter of 2021.

"We've been open about the fact that there are headwinds coming and we experienced that in Q3. The biggest is the impact of iOS 14 changes," COO Sheryl Sandberg said on the company's earnings call Monday. "As a result, we've encountered two challenges: one is that the accuracy of our ad targeting decreased, which increased the cost of driving outcomes for our advertisers, and the other is that measuring those outcomes became more difficult."

While much of the world spent the day focused on Facebook's real-world harms, the company hinted to investors in the report that it wants them looking forward, not backward. Starting in the fourth quarter, the company plans to break out Facebook Reality Labs — its division dedicated to augmented and virtual reality services — as a separate reporting segment from its family of apps, which includes Instagram, WhatsApp and Facebook's namesake social network.

CFO Dave Wehner said Facebook is investing so heavily in this newer division that it will reduce "our overall operating profit in 2021 by approximately $10 billion."

In a statement with the results, Zuckerberg also focused on what's next: "I'm excited about our roadmap, especially around creators, commerce, and helping to build the metaverse."

During the earnings call, Wall Street analysts asked much more about new Facebook initiatives and products like the metaverse and Instagram Reels than about Monday's news coverage, a reminder that investors often prioritize the company's potential for growth over its potential for harm. Evercore ISI did ask Zuckerberg to evaluate the company's progress on building artificial intelligence that can identify problematic content.

Zuckerberg pointed to the company's quarterly transparency reports, which identify "what percentage of the content that we act on is our AI ... finding rather than people having to report it." He said that "in most of these categories ... 90-plus-percent of the content that we act on, we're identifying largely through the AI system." However, he noted that the success of its systems can vary by category.

"Some of the categories, like hate speech, have been harder," he said, because "we're operating in around 150 languages around the world ... there's a lot of cultural nuance in this."

Zuckerberg also attempted to make a rallying call to his staff.

"I know there is a lot of scrutiny of our efforts, and I guess I just want to say to the team and the people who work on this that I'm really proud of the progress that they make," he said.

Correction: A previous version of this article misstated the percentage of Facebook's quarterly sales growth.