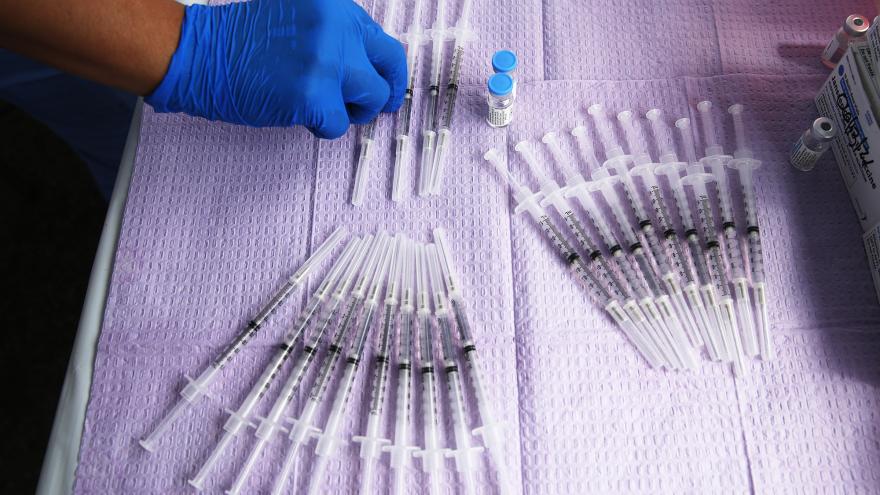 (CNN) -- A new review of Johnson & Johnson Covid-19 vaccine safety monitoring data finds that only 3% of reported reactions after receiving the vaccine are classified as serious -- and there have been a total of 17 incidents of severe blood clotting while also experiencing low blood platelet levels.

The report, published on Friday by the US Centers for Disease Control and Prevention, notes that the safety profile of the vaccine so far has been similar to what was seen in clinical trials, but safety monitoring during the vaccine's rollout quickly identified the blood clot incidents.

"A rare but serious adverse event occurring primarily in women, blood clots in large vessels accompanied by a low platelet count, was rapidly detected by the U.S. vaccine safety monitoring system," CDC researchers wrote in the report. "Monitoring for common and rare adverse events after receipt of all COVID-19 vaccines, including the Janssen COVID-19 vaccine, is continuing."

Janssen is the vaccine arm of Johnson & Johnson. In February, the Johnson & Johnson vaccine was authorized for emergency use in the United States. Use of the vaccine was paused temporarily in mid-April due to reports of extremely rare yet severe blood clotting events in the brain's venous sinuses following vaccinations. The pause lifted last week.

The new CDC report summarizes the latest safety data on the vaccine, which includes 13,725 incidents reported through the agency's Vaccine Adverse Events Reporting System. The data showed that 97% of the events have been nonserious.

Overall, there were 17 events consistent with what has been described as thrombosis with thrombocytopenia syndrome, or blood clotting with low blood platelet levels -- including 14 that were cerebral venous sinus thrombosis and three that did not involve the brain's venous sinuses among women younger than 60 during the vaccine pause, according to the report.

The data also included 88 deaths reported after vaccination. Among those deaths, three occurred in patients with cerebral venous sinus thrombosis and CDC researchers wrote that, after preliminary reviews, "no other deaths appear to have an association with vaccination."

Additional new data published Friday from the CDC suggests that administration of Johnson & Johnson's Covid-19 vaccine in early April may have also been connected to an increased incidence of "anxiety-related events" in the 15-minute waiting period post-vaccine.

All of these anxiety-related events occurred before reports came out of thrombosis with thrombocytopenia syndrome connected to the Janssen vaccine.

Researchers tallied 64 anxiety-related events out of 8,624 vaccine recipients. The rate of syncope, or fainting, was found to be 8.2 incidences per 100,000 doses, which is 164 times the rate of fainting following the flu vaccine, the researchers wrote.

All of the events were reported to Vaccine Adverse Event Reporting System, and none were considered "serious" by VAERS standards. Over half of the reported fainting events occurred in women. For four out of the five sites observed, these events happened on the first day of Janssen shot administration.

Study authors suggested that because the Janssen Covid-19 vaccine is a single-dose shot, people with a fear of needles may be more inclined to get this shot over one of the two-dose options. Out of all fainting cases, 20% of those reported occurred in people who had already informed vaccination site staff they had a history of needle aversion.

Half of the reports of fainting occurred in people ages 18 to 29, and fainting associated with injections is more common in adolescents and young adults. Researchers cited similar fainting rates in administration of the human papillomavirus vaccine, largely given to young people. The HPV vaccine has a fainting rate of 7.8 per 100,000.

"Anxiety-related events can occur after any vaccination," study authors wrote.