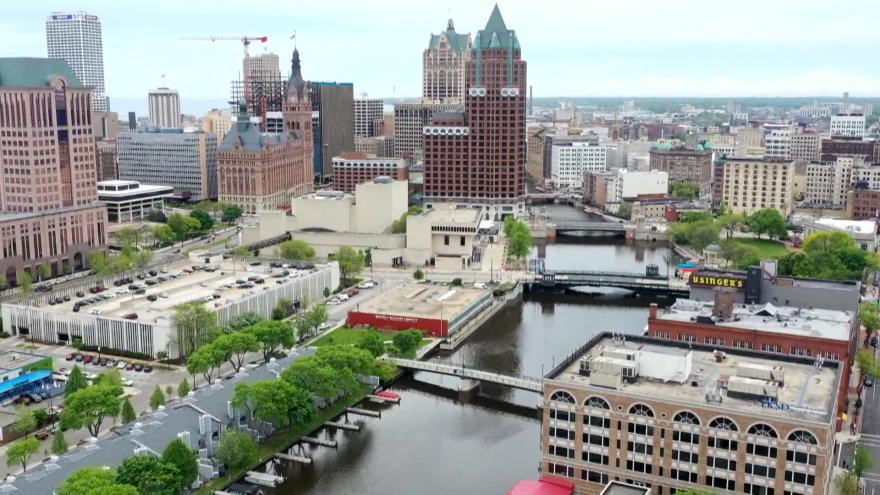 (CNN) -- The US Centers for Disease Control and Prevention on Sunday recommended that no gatherings with 50 people or more take place for the next eight weeks to slow the spread of the novel coronavirus.

The agency said these gatherings include conferences, festivals, parades, concerts, sporting events, weddings and other types of assemblies.

"Large events and mass gatherings can contribute to the spread of COVID-19 in the United States via travelers who attend these events and introduce the virus to new communities," the CDC said in its new guidelines.

The CDC recommended organizers "cancel or postpone in-person events that consist of 50 people or more throughout the United States." The recommendation does not apply to some organizations like schools or businesses.

The new guidance underscores just how much life in the United States will change as the country continues to fight the outbreak, and as officials nationwide order more schools, bars and restaurants to close.

"For a while, life is not going to be the way it used to be in the United States," Dr. Anthony Fauci, director of the National Institute of Allergy and Infectious Diseases, said on CNN's "State of the Union" Sunday morning. "We have to just accept that if we want to do what's best for the American public."

There are at least 3,482 coronavirus cases in 49 states, Puerto Rico, the US Virgin Islands and Washington DC, according to government agencies and the CDC. At least 65 people have died. West Virginia remains the only state without any confirmed cases.

The US can expect more cases and deaths, Fauci said at a White House briefing Saturday, telling reporters: "We have not yet reached our peak."

As of Sunday night, more than 30 states had announced statewide school closures. Maine Gov. Janet Mills became one of the latest leaders to issue a state of emergency Sunday, recommending an end to classroom instruction in public schools statewide "as soon as reasonably practical."

Schools will be closed Monday, but teachers will report to work from Tuesday through Thursday for professional development on remote learning, according to the New York City Department of Education's website. Students will be able to pick up technology for remote learning on Thursday and Friday.

Remote instruction will begin Monday, March 23, per officials. There will be special sites for children of crucial health care workers and first responders. Meals will be available for students.

Restrictions placed on bars and restaurants

With the threat of further spread on the horizon, officials across the country have imposed a slew of restrictions to curb the spread of the virus.

And the restrictions and closures keep coming.

Bars and restaurants in the state of Ohio will close beginning at 9 p.m. Sunday night, Gov. Mike DeWine said Sunday. Carryout and food delivery will still be allowed, the governor said.

A similar order was announced in California, where Gov. Gavin Newsom said Sunday that bars, nightclubs, wineries and brewpubs will be closed. Restaurant capacities must also be reduced by half.

In Pennsylvania, Gov. Tom Wolf ordered all restaurants and bars in five counties to close their dine-in facilities for 14 days starting Monday. Businesses that offer takeout, delivery and drive-through food and beverage service may continue to do so.

Illinois Gov. J.B. Pritzker ordered bars and restaurants to close, beginning at close of business Monday until March 30, he said Sunday. State officials are working to help coordinate food delivery with restaurants and delivery services. Drive-through and curbside pickup will be allowed, the governor said.

Massachusetts Gov. Charlie Baker said Sunday he's banning on-premises eating and drinking at all restaurants and bars throughout the state but will still allow establishments to offer food for takeout or delivery. Baker also amended the state's earlier guidance, prohibiting gatherings of 250 people or more, to now ban gatherings of over 25 people.

In New York, de Blasio said Sunday night he will sign an executive order Monday limiting eateries and bars to takeout and delivery, and order the closure of nightclubs, movie theaters, small theaters and concert venues. The order will go into effect Tuesday at 9 a.m.

In New Orleans, Mayor LaToya Cantrell ordered all full-service restaurants with seating capacity to close at 9 p.m. and asked that establishments attempt to reduce capacity by half.

Officials in Hoboken, New Jersey, announced a city-wide curfew starting Monday. Residents will be required to stay in their homes from 10 p.m. to 5 a.m., with exceptions for people who are required to report to work, Mayor Ravinder Bhalla said Saturday.

Bars and restaurants in Hoboken stopped being able to serve food inside their locations as of Sunday at 11 a.m. They "will be permitted to conduct food takeout and food delivery service only," Bhalla said.

In Colorado, Gov. Jared Polis issued an executive order Saturday requiring downhill ski resorts close for a week due to the presence of coronavirus in the mountain communities with limited care capacity. Officials will continue to monitor the outbreak and may amend the executive order, the governor's office said.

More closures and curfews could be coming. Vice President Mike Pence said in a White House briefing Sunday that new guidelines regarding potential curfews and closures would be released Monday morning.

President Donald Trump expanded restrictions on entry into the United States from Europe to include the United Kingdom and Ireland. The travel restrictions go into effect Monday at midnight.

Restrictions from 26 other countries in Europe went into effect Friday.

US citizens and their family members are exempt from both sets of restrictions, but they are subject to enhanced medical screenings upon arrival.

Some passengers returning from Europe said they faced long lines and confusion upon landing at US airports.

Katherine Rogers landed at Chicago's O'Hare International Airport on Saturday. After waiting in line for about five hours to be screened by the US Centers for Disease Control and Prevention, she was told she had an hour more to go.

"No one seems prepared," she said. "To take us off planes from all over the world and put us together for hours seems counterproductive."

Illinois Gov. Pritzker criticized federal officials for the long lines, telling NBC's "Meet the Press" Sunday they should have increased the number of personnel to handle the influx of travelers returning to the United States.

"Last night, as people were flooding into O'Hare airport, they were stuck in a small area. Hundreds and hundreds of people. And that's exactly what you don't want in this pandemic," the governor said.

"And then today," he added, "it's going to be even worse. There are a larger number of flights with more people coming. And they seem completely unprepared."

Long lines also greeted travelers arriving at John F. Kennedy International Airport, where passengers said they were instructed to share pens to fill out paperwork even as Americans are being urged not to come in close contact with one another.

"They didn't have pens and told us to share, which sounds like a great thing in the middle of the pandemic," passenger Katelyn Deibler said.

Acting US Customs and Border Patrol Commissioner Mark Morgan said in a statement the wait times at some locations Saturday "were unacceptable."

"CBP continually adjusts its resources, in real time, as needed," Morgan said, "and we will continue to do so."

"With this national emergency, there will unfortunately be times of disruption and increased processing times for travelers," Morgan said. "CBP is working around the clock to minimize these inconveniences."

"No resource will be spared, nothing whatsoever," he said.

More than 2,000 laboratories across the country will have high-speed testing capacity, Pence said.

Since the emergency declaration, Pence said, public health services have worked with FEMA and "have reached out to all 50 states to create a process that will enable all Americans who need to be tested to go to a community-based testing site outside of usual health care facilities."

These tests, Pence noted, will be focused on those "most in need."

The Trump administration said Friday it was partnering with the private sector to also boost testing capacity with both more tests and drive-thru testing.

The country's testing system has received stark criticism from health officials and people who said they were turned away despite showing symptoms. Fauci said earlier this week the US testing system was failing to meet the public's needs.

Friday, Trump said 5 million coronavirus tests would be available within a month. He also said American retail executives would be donating resources to facilitate drive-thru testing across the country.

But those companies later said they had few details on what they could offer or when test kits would be available.