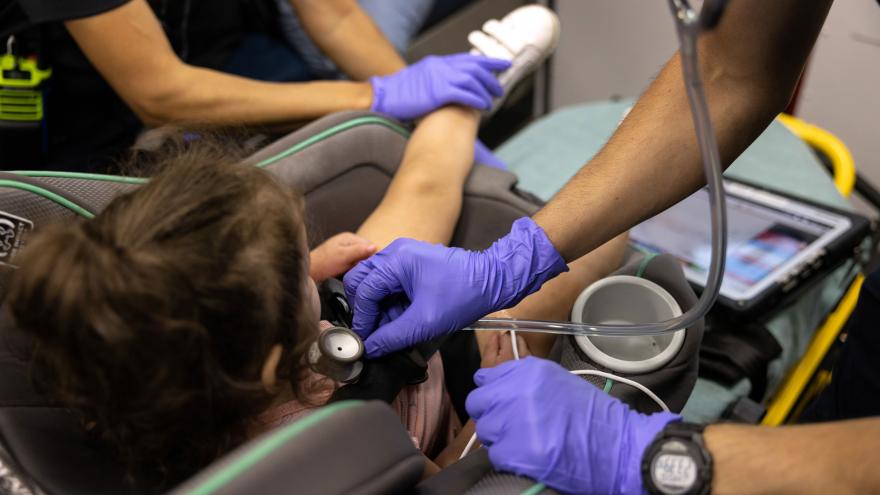 (CNN) -- Covid-19 deaths and hospitalizations are expected to decline over the next fours weeks, according to ensemble forecasts from the US Centers for Disease Control and Prevention published Wednesday.

The latest forecast predicts 740,000 to 762,000 reported deaths by November 6. It's third consecutive week of a projected decrease in newly reported deaths.

There have been more than 717,000 Covid-19 deaths in the US, according to data from Johns Hopkins University.

The latest CDC forecast predicts 500 to 10,100 new confirmed Covid-19 hospitalizations likely to be reported by November 5 -- a fifth straight week of projected declines. As of October 12, there were 64,332 people hospitalized with Covid-19, according to US Health and Human Services data.

In terms of cases, there was no predicted increase or decrease.

The latest forecasts come as Covid-19 cases are declining in the US -- an optimistic outlook that needs to be tempered by the still-high rate of infections, especially in children.

The number of new cases in children remains "exceptionally high," with 148,222 cases reported in the week ending October 7, according to data from the American Academy of Pediatrics published Monday.

Nationally, Covid-19 cases, hospitalizations and deaths have been decreasing, according to Johns Hopkins University. Over the last week, an average of 87,676 people reported infections and 1,559 people died of Covid-19 a day, according to JHU data.

The infection rate still remains well above what's needed -- which Dr. Anthony Fauci said Sunday should be below 10,000.

And with winter threatening to send people indoors and increase spread, experts worry cases could go back up again. The risk is higher for children, many of whom are still not yet eligible for vaccination.

Currently, vaccines are only available for children as young as 12, although Pfizer and BioNTech have requested an emergency use authorization from the US Food and Drug Administration for younger children.

In the meantime, some schools have leaned on preventative measures to protect students, like masking, distancing and testing. In Massachusetts, Gov. Charlie Baker is planning to deploy 200 members of the National Guard to assist in school testing for Covid-19.

But vaccination remains the best tool to fight the pandemic, experts say.

And some regions are doing better than others.

Overall, the numbers aren't as promising. As of Tuesday night, only 56.5% of the US population was fully vaccinated, according toCDC data.

"We need the overwhelming proportion of those unvaccinated people to be vaccinated and then we can be quite confident that if we can do that, you will not see a resurgence," said Fauci, the director of the National Institute of Allergy and Infectious Diseases.

In fact, vaccines could have prevented more than 90,000 deaths over the past three months, according to a new analysis by the Kaiser Family Foundation.

More than 104,000 people in the US died of Covid-19 between June and September 2021, according to Johns Hopkins University data. Vaccines were widely available to all US adults at the time, but an "overwhelming majority" of those who died were unvaccinated, according to the KFF analysis.

If all adults age 18 or older were vaccinated, more than 90,000 additional lives could have been saved between June and September. About half of those preventable deaths -- about 49,000 -- occurred in September alone, according to the foundation's analysis.

While many experts and officials are encouraging institutions to enact vaccine mandates to protect employees, students and customers, some are fighting their efforts.

On Monday, Texas Gov. Greg Abbott issued an executive order prohibiting any entities from requiring individuals to get vaccinated.

"The COVID-19 vaccine is safe, effective, and our best defense against the virus, but should remain voluntary and never forced," said Abbott.

"This flies in the face of public health guidance and is really not the right thing to be doing in the middle of a pandemic," CNN medical analyst Dr. Leana Wen told CNN's John King on Tuesday.

Dr. Marc Boom, president and CEO of Houston Methodist said the hospital system is reviewing Abbott's executive order and its possible implications while still expecting employees and physicians to be vaccinated.

"We have fulfilled our sacred obligation to keep our patients safe, putting them first. Not only are our patients safe as a result, but we are able to remain healthy at work and be there for our community when it needs us the most."

More than 150 Houston Methodist employees either resigned during a two-week suspension period in June or were terminated for not complying with a mandatory vaccination policy.

Mandate bans have been especially relevant to health care systems, where some professionals have resigned over such measures and others have advocated for them to protect their colleagues and their vulnerable patients.

According to a new poll from Axios-Ipsos, a majority of Americans, 65%, support requiring vaccines for everyone working in a health care setting.

It also found that more Americans, 30%, expect it to take more than a year to get back to normal pre-Covid life, up from 9% who thought this in early June.

Fewer people are also saying they've returned to their normal life -- 22% now compared with 28% in June -- or saying it will happen in the next six months -- 13% compared with 36% in June -- according to the poll.

In one sign of normalcy, senior administration officials told CNN that the US plans to ease restrictions on travel for fully vaccinated visitors from Canada and Mexico starting in early November, relaxing bans that have been in place for more than 18 months.

Since the US has approved booster doses of the Pfizer/BioNTech vaccine for some vulnerable Americans -- and officials are weighing approval for the Moderna and Johnson & Johnson boosters -- Moderna on Tuesday urged the FDA to authorize a 50-microgram dose, according to documents released ahead of a key meeting.

The company said this dose increases protection against the coronavirus while helping to keep the worldwide vaccine supply higher.

That dose is half the size of the 100-microgram doses used in the primary series of the two-dose vaccine.

Moderna is requesting authorization for the smaller dose at least six months after the second dose for certain groups: people age 65 and older; people ages 18 to 64 who are at high risk of severe Covid-19; and people ages 18 to 64 whose exposure to the coronavirus in their settings or jobs put them at risk for Covid-19 complications or severe illness.