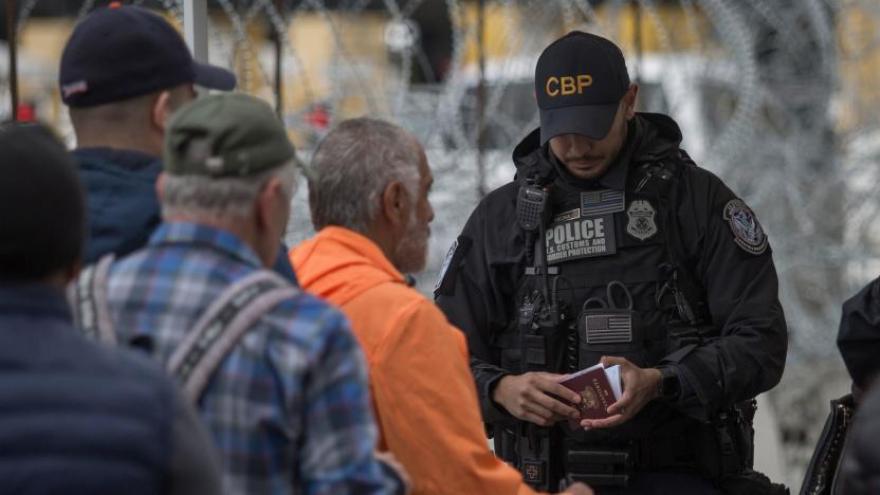 Weeks after coronavirus restrictions took effect on US borders, Customs and Border Protection officers say that although travel has greatly decreased, exposure from continued border crossings poses a threat to their workforce and the public.

(CNN) -- Weeks after coronavirus restrictions took effect on US borders, Customs and Border Protection officers say that although travel has greatly decreased, exposure from continued border crossings poses a threat to their workforce and the public.

The steady pace of travel is frustrating those charged with vetting people crossing on a daily basis and fueling tension between officers and the agency that employs them. CBP officers are on the front lines, regularly interacting with the public and tasked with protecting US borders and managing legal trade and travel.

"It's pretty much business as usual," said Alfonso Ortiz, speaking on behalf of the National Treasury Employees Union San Diego chapter, which represents around 3,500 US CBP employees at the agency within the Department of Homeland Security.

In March, the Trump administration announced it was suspending nonessential travel on the northern and southern borders due to the coronavirus pandemic. Normally, hundreds of thousands of people, including US citizens and residents, cross the borders on a regular basis for a range of reasons, including work, attending school, visiting family and tourism, among others.

On a typical day before the coronavirus outbreak, CBP processed 681,750 incoming land travelers into the US. While the numbers have dropped, cross-border travel is still occurring, with backups in some areas and desolate ports in other regions.

But the concern shared by many front-line officers along the southern border is that ongoing traffic -- and what they say is a lack of clarity on who's allowed to pass through -- increases the likelihood of being exposed to coronavirus. As of Tuesday, 305 CBP employees had tested positive for coronavirus across 24 states and the District of Columbia. The agency doesn't provide details on their positions.

The travel limits were intended to curtail the flow of people amid a growing number of coronavirus cases. But officers say there's still a lot of latitude and people continue to pass through.

The continued travel has become a point of contention among union officials and CBP, which the officials said has provided little guidance on who is and isn't allowed to travel across the border. "It's a frustration of all angles. We don't know what essential or nonessential travel is. There's no clear clarification," said Ortiz, who is based in San Diego.

Miguel Flores, National Treasury Employees Union chapter president for Eagle Pass and Del Rio, Texas, said that the two types of travel blur together because of the way they're defined. He said that locally, the union and management have coordinated to clarify the definition to "make it work for our area."

CBP said in a statement to CNN that the agency "has issued clear and specific guidance to all of its field offices regarding activities that do and do not constitute essential travel across U.S. land borders."

Travel on the southern border had initially been reduced, but it started to increase locally within the last week, said Vincent Salgado, union local chapter president in Calexico, California. He added that "once our front lines start to get infected, that's just going to continue to spread. Once it hits the worksite, it's not going to stop with one or two bodies. We've got to try to reduce it wherever and in whichever way we can."

Patricia Cramer, the union chapter president in Arizona, said they are worried that officers will get sick and won't be able to work.

"You can't just get Joe Schmo from the street to replace us," she said, pointing out that it takes years to train for some positions, like trade enforcement. "When we all fall ill to this, who is going to be at the ports of entry?"

The Trump administration has touted protections for front-line officers on the US northern and southern borders. Acting CBP Commissioner Mark Morgan said Friday that the agency ensured that field offices and sectors had personal protective equipment, like gloves and respirators, and guidance on their use.

Multiple union representatives told CNN that while they had sufficient PPE, the agency isn't doing enough for the health and safety of its workforce, putting officers -- and the people they vet -- at risk of contracting the highly contagious coronavirus. The issues raised by several members include a lack of Covid-19 testing for employees, insufficient contact tracing and a lack of medical screening of travelers.

"Employees are now requesting front-of-line services to get to Covid-19 testing," he said. Flores also called for periodic testing of employees, saying, "I think it would go a long way."

The unions and management have worked together on some safety efforts. For instance, both Salgado and Flores said there are plans to install plexiglass barriers between the officers and the traveling public at the ports in their regions.

"We don't have the luxury of social distancing," said Flores about employees who work at ports. "The only way to actually reduce our exposures as employees with CBP is to be away from work."

The agency decided to restrict employee leave on the southern and northern borders due to an increase in drug trafficking enforcement, as well as a "real concern" that as virus conditions worsen in Mexico, a surge in illegal migration is possible, according to an April 17 letter to employees from CBP's Executive Assistant Commissioner for the Office of Field Operations Todd Owen.

Hours of operation at 45 land ports of entry on the northern and southern borders were reduced in response to limits on nonessential travel, according to the letter to employees. The reduced hours have "helped limit potential exposure" for front-line employees, Owen wrote in the letter.

Against the backdrop of the pandemic, the Trump administration also implemented a rapid turn-around policy for migrants illegally crossing the border. That order and travel restrictions limiting entry at the US southern and northern land borders have been extended.

Still, some CBP officers said more steps need to be taken to protect their workforce.

"We just feel it's not enough. We need to limit more people from coming in," said Flores.

"It's understood that some of these travelers do have legitimate business, but others who are just going to shop at the local Walmart or just to come and get gas and things like that, we believe that those are the people that are nonessential," Flores added.