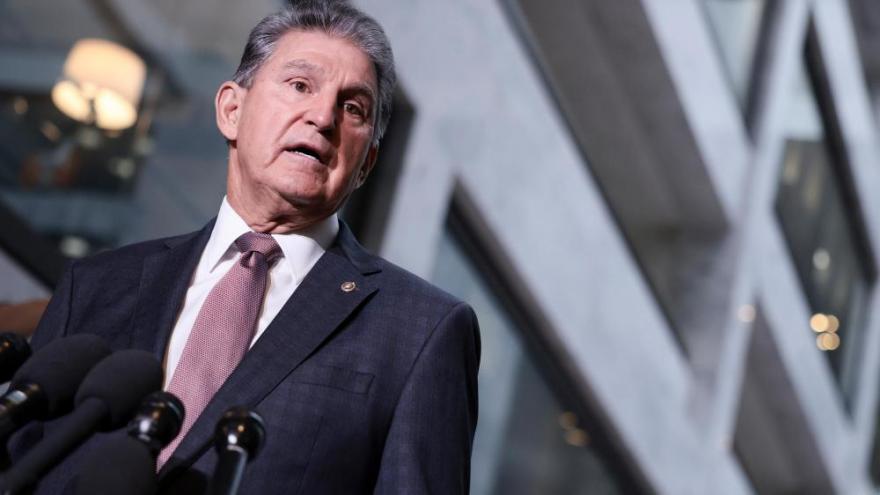 CBO issues score on how much Build Back Better would cost if programs were permanent. Sen. Joe Manchin is seen here on October 06 in Washington, DC. Manchin spoke on the debt limit and the infrastructure bill.

(CNN) -- The Congressional Budget Office has released a new analysis of the Democrats' social safety net plan to see how much the bill would cost if a series of provisions were extended long term, fulfilling a GOP request intended to portray the bill as far more expensive than it seems.

The CBO estimates that the version of the legislation without sunsets would "increase the deficit by $3 trillion over 2022 to 2031." The analysis assumes that any extension wouldn't be paid for. The current bill, known as the Build Back Better Act, does not include such extensions to the provisions.

The latest CBO score is a Republican-led effort to show that the bill costs more than Democrats say it does, but Democrats are arguing that many provisions in their proposal sunset and therefore the true cost is not what Republicans say it is.

President Joe Biden has also said publicly that if any of the programs in Build Back Better were extended, they would be paid for in those subsequent years.

"I welcome a serious conversation about how to pay for the investments we make, but here is what those critics are not telling you. They're not telling you that I've committed to paying for every single program that extended, if any are, in future legislation, whether that's for a day or a decade," Biden said at the end of November during remarks about Build Back Better.

Yet, the analysis could be important to a key moderate Democratic member, Sen. Joe Manchin of West Virginia, who has long been concerned that many programs in the Democratic bill may end up being extended or even become permanent.

Republican Sen. Lindsey Graham of South Carolina, the ranking member on the Senate Budget Committee, addressed Manchin specifically during a news conference Friday at the Capitol.

"I talked to him this morning and he was stunned," Graham said of Manchin. "I think he felt vindicated in that his concerns were legitimate."

Manchin's office said the senator had yet to comment about their conversation.

Not long after the analysis posted, Senate Majority Leader Chuck Schumer and House Speaker Nancy Pelosi released statements responding to it, saying this is a "fake" CBO report because, they argue, any extensions of the programs would be "fully offset."

"Republicans did not include this important fact in their request," Schumer said in a written statement.

The CBO released a letter later Friday in response to Schumer's criticism, saying in part, "The modifications that CBO analyzed were specified by Senator Lindsey Graham and Congressman Jason Smith. The modifications would make various policies permanent rather than temporary, making the deficit larger than the version of the bill that was passed by the House of Representatives would."