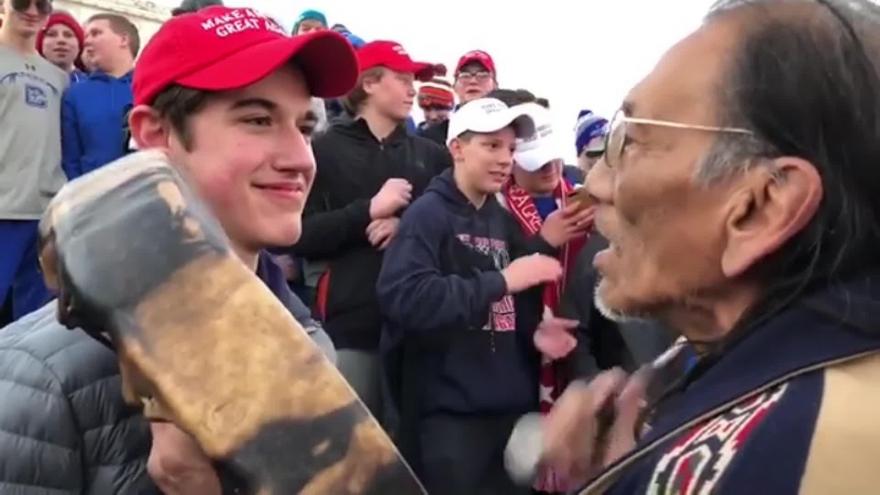 Nick Sandmann, the Catholic school student in the center of the viral video showing him facing off with a native American elder, spoke for the first time to the "Today" show Wednesday, saying, "People have judged me based off one expression."

(CNN) -- Nick Sandmann says he doesn't owe anyone an apology, but he respects Omaha Nation elder Nathan Phillips, with whom he faced off in Washington D.C., and he'd be willing to engage in dialogue with him.

Speaking for the first time to the "Today" show Wednesday, the 16-year-old said neither he nor any of his classmates at Kentucky's Covington Catholic High School are racist and they've been mischaracterized based on videos of the scene that unfolded in front of the Lincoln Memorial last week.

When asked if he saw his own fault in any way or if he felt he needed to apologize for his actions, Sandmann said: "As far as standing there, I had every right to do so. My position is that I was not disrespectful to Mr. Phillips. I respect him. I'd like to talk to him. In hindsight, I wish we could've walked away and avoided the whole thing, but I can't say that I'm sorry for listening to (Phillips) and standing there."

Videos from the incident show a small group of Hebrew Israelites taunting and hurling homophobic and bigoted slurs at the students before Phillips and other native Americans wade into the crowd. Phillips, playing his drum, eventually finds himself face to face with Sandmann and they lock eyes as Phillips continues to play his drum.

Critics have said Sandmann and the other kids were disrespectful, but Sandmann told "Today" that he did not see his classmates engage in a taunting "tomahawk chop," which was captured in one video, nor did he hear any of his classmates utter epithets or chant, "Build the wall." In none of the videos viewed by CNN could the students be heard chanting "Build the wall."

As for claims that he was smirking, Sandmann denies the assertion.

"I wasn't smirking," he said, "but people assume that's what I have (done), and they've gone from there to titling me and labeling me as a racist person, someone that's disrespectful to adults. ... They've had to assume so many things to get there without consulting anyone that can give them the opposite story."

'I wanted the situation to die down'

Asked to characterize his own actions, Sandmann said he didn't want to walk away because it might be perceived as disrespectful if Phillips was trying to talk to him.

His smile, he said, was meant to convey: "This is the best you're going to get out of me. You won't get any further reaction of aggression, and I'm willing to stand here as long as you want to hit this drum in my face."

He wasn't blocking Phillips from ascending the steps of the Lincoln Memorial, he said, and if Phillips would've expressed interest in walking by him, Sandmann would've let him pass.

The chants in which his classmates engaged were a "peaceful response of school spirit," he said. Looking back, he wishes he and the other students would have found another location to wait on their buses after the Hebrew Israelites began berating them, "but at the time, being positive seemed better than letting them slander us."

Sandmann's latest remarks came the day after Phillips offered to travel to Covington Catholic to talk about the importance of respecting diverse cultures, according to a statement from the Lakota People's Law Project.

Phillips, the Indigenous Peoples March and the Lakota group are trying to set up meetings with the students, members of the community and church officials, the statement said. Sandmann indicated he's open to speaking to Phillips.

Videos of the encounter from different angles led to polarized opinions on whether the teens were mocking Phillips or whether Phillips was agitating them. Phillips was at the memorial for the Indigenous Peoples March and the students were there for the March for Life rally.

Phillips said he decided to approach the teens when he saw an escalating situation between them and the Hebrew Israelites, leading to the faceoff with Sandmann. He described the situation as tense and said he feared for his safety.

Sandmann told "Today" that he, too, felt threatened -- by the Hebrew Israelites -- and though he and his classmates heavily outnumbered them, "they were a group of adults and I wasn't sure what was going to happen next."

President Donald Trump publicly sided with the group of students, calling them "symbols of Fake News and how evil it can be." On Tuesday, White House press secretary Sarah Sanders said the students were invited to the White House, but any meeting would take place after the partial government shutdown ends.

The school was closed Tuesday, but reopened Wednesday morning. At least four Park Hills police cruisers were posted at the entrance and exit of the school, whose parking lot was about half-full. A police officer or security guard on the main road directed a steady stream of cars into the parking lot and student drop-off area.

On Tuesday, the Diocese of Covington and Covington Catholic High School took precautionary measures after "threats of violence and the possibility of large crowds" at a planned protest at the school, a joint statement said.

The diocese and school said an "independent, third-party investigation" will begin looking into the incident this week.