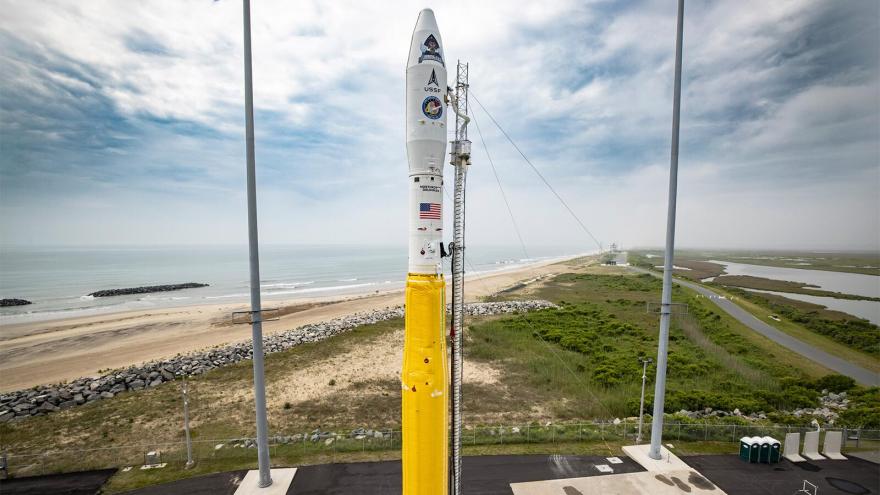 Northrop Grumman's Minotaur 1 rocket on Wallops Island is made up of four stages to propel the cargo into orbit.

(CNN) -- Many Americans on the Mid-Atlantic Coast will be treated to a view of Northrop Grumman's Minotaur 1 rocket launch Tuesday morning.

The rocket will take off from the NASA Wallops Flight Facility on Wallops Island, Virginia, from Mid-Atlantic Regional Spaceport's Pad 0B at 9:35 a.m. ET.

The National Reconnaissance Office, the US government agency in charge of America's intelligence satellites, will be launching three new satellites into orbit on the Minotaur 1, said US Air Force Colonel Chad Davis, director of NRO's Office of Space Launch.

"We are the nation's eyes and ears in space," Davis said. "On any given day, it's something like 500,000 people that access intelligence derived from the information gathered from NRO systems."

That intelligence is used to make important decisions about national security and aid US warfighters, he added.

How the cargo reaches space

The Minotaur 1 is a four-stage rocket, meaning it's made of four separate rocket motors that help launch the cargo into orbit, said Kelly Fitzpatrick, senior guidance, navigation and control engineer on the Minotaur program at Northrop Grumman.

Stage one ignites at launch to propel the rocket upward. Once it's done burning, it separates from the rocket and falls into the ocean, she said. The second stage is then ignited, and the process is repeated.

The fourth stage of the rocket stays up in orbit, Fitzpatrick said, but in a couple decades it will also eventually fall back down to Earth.

The Minuteman systems are intercontinental ballistic missiles meant to protect the United States in the event of an attack and can be deployed at a moment's notice, Davis said.

The first Minuteman missiles went online in 1962, and over the years newer missiles have been designed to replace the old ones, he added.

When the missiles become obsolete, the ICBM motors go into storage, where they are maintained by Rose's division. If an opportunity arises for the motors to be used in a rocket, they are refurbished and tested for flightworthiness.

Some of Northrop Grumman's rockets use stages that have been retired from previous rockets as a cost-effective solution when building their rockets, Fitzpatrick said.

How to view the launch

The launch is targeted for 9:35 a.m. ET on Tuesday, June 15, but it's dependent on weather, so the exact time may shift, said Keith Kohler from NASA Wallops Public Affairs.

NASA's visitor center on Wallops Island is closed due to the pandemic, but Kohler said there are plenty of public viewing spots for locals to catch the launch.

To see the Minotaur 1 take flight, Kohler recommended people who live close to the launch site go to Assateague Island, which is in both Maryland and Virginia, or Ocean City, Maryland,

Americans as far north as Maine and as far south as Georgia might be able to catch a glimpse of the rocket, according to a NASA viewing map.

The rest of the country can follow along virtually and watch live coverage of the event beginning at 6:30 a.m. ET.