Cartoonist Gahan Wilson, 'the Wizard of Weird,' dies at 89 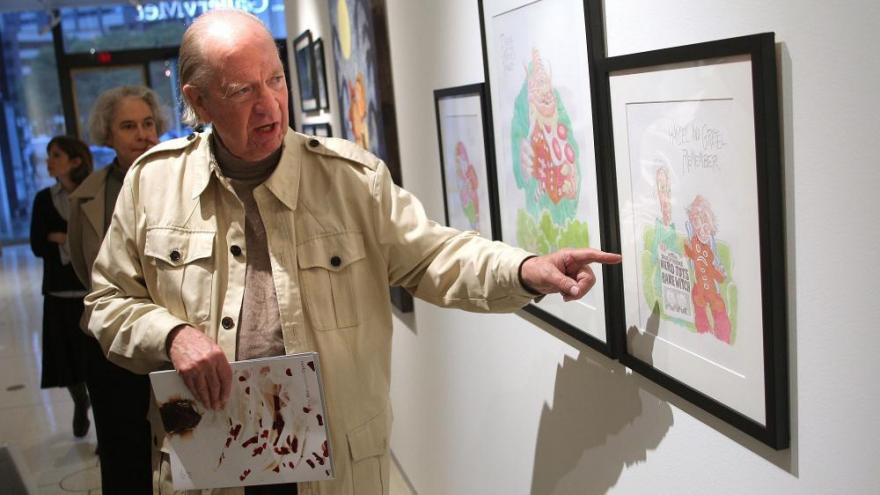 Gahan Wilson discusses his piece on display at an exhibit in New York in 2007.

(CNN) -- Cartoonist Gahan Wilson, whose magazine illustrations earned him the nicknames "the Michelangelo of the Macabre" and "the Wizard of Weird," has died at 89, according to his stepson Paul Winters.

"The world has lost a legend," Winters said. "One of the very best cartoonists to ever pick up a pen and paper has passed on."

Wilson gained fame with his offbeat drawings in magazines like Playboy, The New Yorker and National Lampoon.

One drawing featured a man deliriously happy as he is being strapped into the electric chair and saying, "Gee, it's just like in the movies."

Another showed an eye doctor with a knife about to attack a patient who is reading an exam chart that says, "I am an insane eye doctor and I am going to kill you now..."

On Halloween, Wilson posted an old image from Playboy on his Facebook page.

Wilson told David Letterman in 1982 that he was always attracted to circus sideshows and freaks.

He said he originally had read classic gothic novels for inspiration but then found it more abundant in everyday life.

"The daily papers and television news are a much better source of grotesque humor," he said.

His stepson wrote on Facebook that Wilson, born February 18, 1930, died peacefully surrounded by loved ones on Thursday.

On his website, Wilson said he made it through a "chink in the armor" of big-time magazine publishing when an editor laughed at his work but didn't realize it was "too much for the common man" to understand.

"The creative artist is automatically an outsider, because he sees through the world that everybody else takes as the final reality, and he's a very scary kind of guy."

Correction: A previous version of this story misstated the name of Gahan Wilson's step-son. His name is Paul Winters.