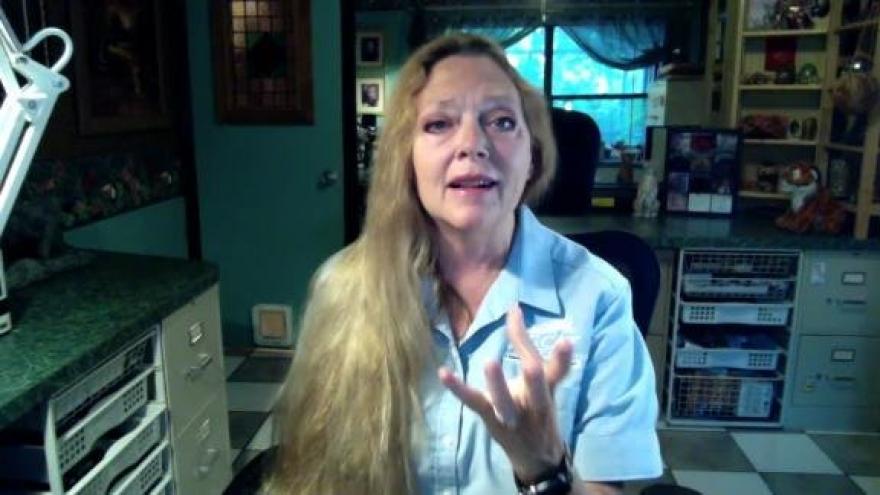 (CNN) -- Carole Baskin, founder of Big Cat Rescue and star of the Netflix series "Tiger King," is offering a $5,000 reward in connection with the tiger that has been missing in Houston since Sunday, according to a video posted on her verified Instagram account.

Baskin is offering the money to whoever has the big cat, provided that person will release the animal to a sanctuary that is accredited by the Global Federation of Animal Sanctuaries, and will work with the authorities to convict the people involved in the buying and selling of the tiger, Baskin says in the video.

The Bengal tiger was seen strolling in front of a Houston home Sunday before being put in an SUV and allegedly driven away by Victor Hugo Cuevas, who was out of jail on bail for an unrelated murder charge.

The whereabouts of the tiger are currently unknown.

Cuevas posted a $50,000 bond Wednesday over the tiger incident, after he was charged with evading arrest/detention with a vehicle.

His attorney, Michael Elliott, appeared on CNN's "New Day" on Friday morning and said he and his client are cooperating with federal authorities who are looking for the tiger, but not with Houston police because, "Quite frankly, you can't trust them."

He said Cuevas has been an occasional "babysitter" for the tiger.

"Clearly, they do have a bond," Elliott said.

Cuevas has a court hearing scheduled for Friday.

Elliott told reporters before the hearing, "I'm sure that we'll get some questions answered today and a lot of things will probably become public knowledge that maybe weren't known before. At the end of all of this, we hope to show that Victor Cuevas is not guilty of evading arrest and that the judge should not revoke his bond."

The attorney added, "I think you will also learn and come to find out that Victor Cuevas loved this, you know, tiger, loves him very much and really wants desperately to try to find the tiger and get the tiger to a nice, safe home."

Elliott held a news conference outside of the Fort Bend County jail with Cuevas by his side.

They maintained that Cuevas is not the owner of the tiger, whom they described as a 9-month-old male named "India."

"(The police) saw my client go out in the yard and retrieve the tiger and they've assumed he's done a whole lot of different things that he necessarily has not done and not guilty of, just like they assumed that the tiger is his," Elliott argued. "It, of course, is not."

Elliott stressed they were working to locate the animal but would not say where his client, who was last seen with the tiger, drove Sunday night with India inside an SUV.

"We are both very anxious and looking forward to doing everything we can do to find India," he said. "We want to find India."

The Houston Police Department continues to investigate the location and status of the tiger. Officials have not given any reason to believe the tiger is on the loose or roaming the streets, and there is no indication the investigation has extended beyond Houston. Police characterize this situation as an "ongoing investigation," and that any updates will come through its Twitter account.

Owning a tiger is a violation of Houston law, a misdemeanor punishable with a maximum $500 fine, but it is legal under Texas state law with certain restrictions.

Cuevas was previously charged with murder for allegedly shooting and killing a man in 2017. Court documents allege he has been in multiple violations of his bail since he was arrested.

Prosecutors have asked a judge to revoke Cuevas' bail for the murder charge.

A startling sight in Houston

Jose Ramos, a resident in the Houston neighborhood where the incident took place, was eating a meal Sunday night when he looked out the window and saw a tiger sitting in his front yard.

"I had to pinch myself," he said in an interview with CNN. "Was this real?"

Ramos cautiously went outside to get a closer look. "It seemed a bit skittish," he said. "But he was making full eye contact with me."

An off-duty deputy who lives nearby showed up after seeing some photos of the tiger Ramos had posted on a neighborhood email forum, Ramos said.

The deputy had his weapon trained on the tiger when Cuevas came out of a nearby house, pleading with the deputy not to shoot the tiger, Ramos said. "He sounded very stressed out, very anguished by the mere fact that the deputy was aiming at the tiger and ready to shoot him."

A man -- identified by police as Cuevas -- grabbed the tiger and tried to move it away from others, as seen in video captured by Maria Torres and provided to CNN affiliate KTRK.

As police units responded, Cuevas put the tiger in a white SUV and drove off, according to Houston Police Commander Ron Borza.

Cuevas is charged with evading arrest/detention with a vehicle, according to Fort Bend County Jail records.

What to do when faced by a tiger

In an interview with CNN on Wednesday, Baskin praised the off-duty deputy for his response when confronting the tiger.

"I was so impressed with the deputy that showed up on the scene because he did exactly the right thing, and he showed amazing restraint in not shooting that tiger," Baskin said.

"He kept eye contact, he backed away slowly. A tiger, if you look down, if you turn, if that neighbor had run back to his door, that triggers their instinct to kill."

Baskin said those in the neighborhood who were near the tiger were in "extreme danger."

"Tigers are hardwired to roam hundreds of square miles, so there's no cage that's going to be sufficient for them," she said.

"The only reason that people have tigers as pets is to try to show off to others."

How agencies are responding

The unique dilemma regarding a missing tiger has resulted in multiple government services and animal groups coordinating on what to do if the tiger is found.

The US Fish and Wildlife Service told CNN the agency is consulting with Houston Police and offering expert advice to make sure the Endangered Species Act is not violated when detaining the tiger.

A spokesperson for BARC -- the city's animal shelter and adoption facility -- said animal control officers are assisting Houston Police with the investigation. Per city rules, it is illegal to keep any wild animals that are dangerous to humans in any facility other than an accredited zoo or shelter.

"In the event any such animals are found in Houston, Animal Control Officers will impound the animals and transport them to a secure location -- either BARC, another shelter, or regional wildlife facility -- to protect the safety of the public as well as the animals' health," spokesperson Lara Cottingham said in a statement.

In 2019, a different tiger was found in a cage in an abandoned home in Houston. Now named Loki, the tiger is located about 200 miles farther north in Texas at the Cleveland Amory Black Beauty Ranch, which is part of the Humane Society of the United States and houses more than 800 animals. That includes a second tiger named Elsa that was discovered in Bexar County, Texas, earlier this year during a historic round of winter storms.

The Black Beauty Ranch has offered to take in the new tiger once it is found, but a decision has not been made by Houston city officials, according to the Humane Society.

HPD Commander Borza said in a press conference on Monday that finding the tiger was a top concern. He added they have also been looking for bear cubs that were missing last year but have yet been located.