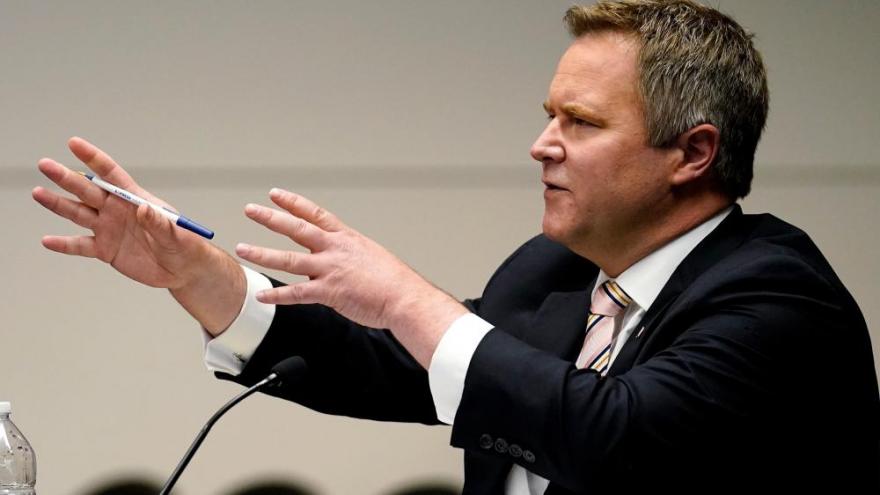 According to the Justice Department, attorney John Pierce, pictured here on October 30, 2020 in Illinois, did not appear at recent court hearings on behalf of some of his nearly 20 US Capitol riot clients after reportedly becoming ill with Covid-19.

(CNN) -- A prominent lawyer has not been appearing at recent court hearings on behalf of some of his nearly 20 US Capitol riot clients after reportedly becoming ill with Covid-19, the Department of Justice said in court filings in multiple cases on Monday.

Prosecutors said they believe the attorney, John Pierce, may be in the hospital and that his absence has effectively brought several cases to a standstill.

Pierce, from his Los Angeles-based law firm, Pierce Bainbridge, had taken on defending some of the most high-profile alleged Capitol rioters, including some accused of conspiring with the Oath Keepers or the Proud Boys extremist groups, the son of a right-wing media founder, a church leader who brought a group to the January 6 rallies and a man accused of breaking a window, assaulting police and carrying a tomahawk in the Capitol.

Pierce's health creates a problem in the cases because, the Justice Department says, the defendants don't have another attorney to adequately represent them. The situation also shines a spotlight on one of the most prominent right-wing lawyers to emerge after January 6, and as the coronavirus pandemic rages.

Pierce's vaccination status isn't known, and neither he nor his law firm has independently confirmed whether he is ill. He tweeted earlier this year that anyone who trusts the government "to shoot some vague, unknown 'vaccine' in their arm" is taking "a very big risk."

CNN received no response to requests for comment sent to Pierce and other people who work at his small law firm.

At a court hearing last week for one alleged Capitol rioter, Ryan Marshall, an associate of Pierce, said that he couldn't attend because of a conflict, according to the Justice Department.

Later that day, at a meeting about one of Pierce's Capitol riot clients, Marshall told prosecutors that Pierce was headed to the hospital after an accident, the Justice Department said in a filing.

The next day, Marshall told another judge that Pierce was hospitalized with coronavirus, on a ventilator and not responding, according to the Justice Department.

"Unfortunately, it seems that Mr. Pierce may be hospitalized and unable to communicate, and it is unclear when Mr. Pierce will recover," prosecutors wrote to the court on Monday.

The Justice Department also noted that others close to Pierce later denied to Marshall and to an NPR reporter that he was ever on a ventilator, according to the filing.

Prosecutors oppose Marshall acting as a stand-in for Pierce.

Marshall also faces his own criminal charges related to his time working as a courthouse clerk, further complicating his ability to work as an attorney, according to the court filings.

Marshall is accused in Pennsylvania of unlawfully recording a court hearing and of a theft conspiracy, after he allegedly convinced a judge to sign a false document to help a co-worker allegedly steal from a dying relative, according to Pennsylvania court records and local news reports. He is awaiting trial.

Marshall didn't immediately respond to a request for comment.

Even before the January 6 investigation, Pierce tied himself closely to far-right supporters of former President Donald Trump.

He's currently representing ex-Trump adviser Carter Page in a civil lawsuit related to foreign surveillance, and for a time he represented Kyle Rittenhouse, who was accused of killing two people on the outskirts of protests over the police shooting of Jacob Blake. Pierce attempted to cast Rittenhouse as a community protector.