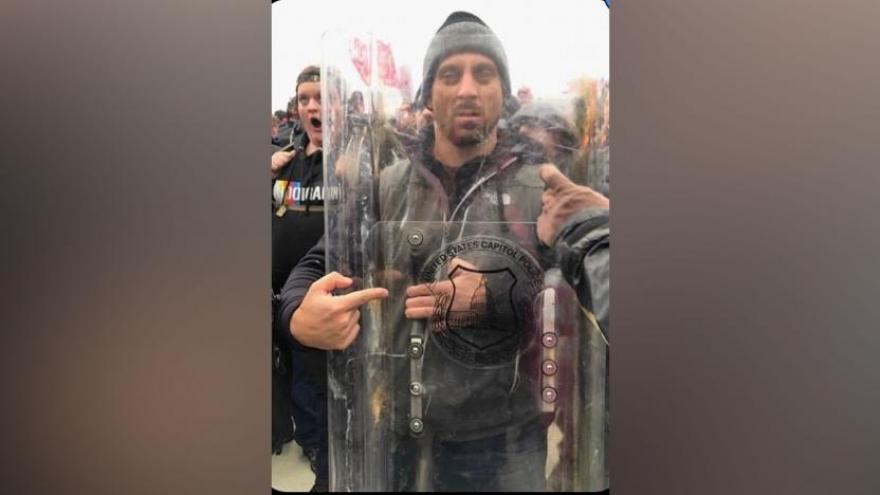 Thomas Sibick posted this photo of himself holding a police shield on Facebook, according to court filings.

(CNN) -- Federal prosecutors have filed charges against a man who allegedly participated in the brutal assault of DC Metropolitan Police Officer Michael Fanone, who spoke out after the attack about how he had pleaded with the pro-Trump mob to spare his life on the day of the riot at the US Capitol.

Prosecutors said Thomas Sibick was seen on police body-camera footage assaulting Fanone while he lay on the ground outside the Capitol during the January 6 insurrection. In a January interview with CNN, Fanone said he had been tased several times in the neck, had been beaten with a flagpole and had heard people screaming, "Kill him with his own gun," while rioters tried to pull his weapon out of its holster.

A federal judge in New York released Sibick from custody on Friday after an initial hearing. The Justice Department has appealed that decision and said in court filings that Sibick should be jailed because he had "participated in a violent riot and robbed an officer" and is a danger to the public.

An attorney for Sibick is not yet listed on his docket. CNN is attempting to reach him for comment.

During the brawl outside the Capitol, Sibick allegedly grabbed Fanone's badge and radio, and he later posted a photo of himself holding a police shield on Facebook, court filings say.

In a subsequent interview with FBI agents, Sibick said he had been at the Capitol but that he had tried to pull Fanone away from the rioters. Sibick told the FBI agents that he had more information about the assault, though he maintained that he was not involved, according to court documents.

Prosecutors suggested in court filings that Sibick had lied to the FBI about the stolen badge.

He first told the agents that the badge and radio had fallen off while he tried to help Fanone, and that he had thrown them in a trash can as he left the Capitol grounds. Later, Sibick said he needed to "recant" those claims and that he had disposed of the items in a New York dumpster, according to court filings.

FBI agents allegedly tricked Sibick into believing they were going to check security footage near the dumpster. Sibick told the agents he "wanted to do the right thing" and that he had buried the badge in his backyard. Sibick then said he bought a metal detector, dug up the badge and returned it to the FBI, court filings say.

As prosecutors grind through massive amounts of evidence, videos and tips against more than 400 possible defendants in an investigation called one of the "largest in American history," the Justice Department is preparing some of the first guilty plea offers for people charged in the Capitol insurrection.

Department officials are working on the timing of potential plea deals. Internal discussions will likely be influenced by the arrival of Attorney General Merrick Garland -- who got his first briefing about the investigation on Thursday -- and other senior aides who are coming on board as part of the Biden administration.

More than 300 people have been charged so far in connection with the assault on the Capitol.