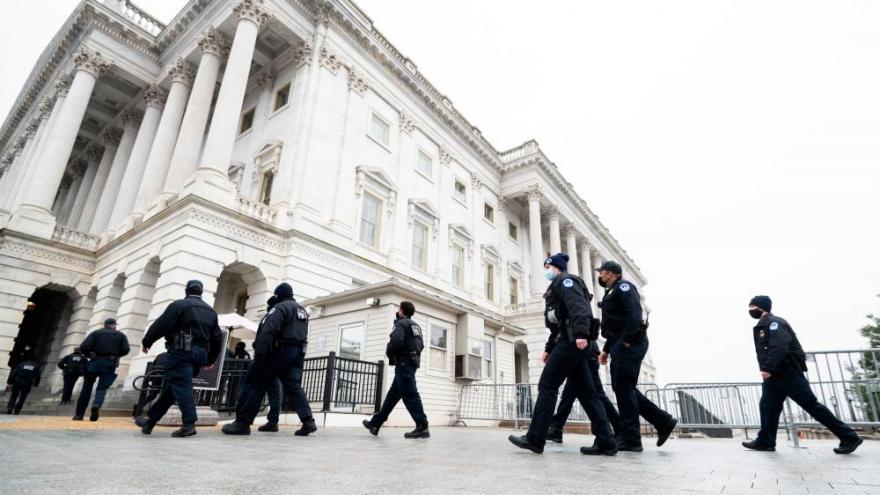 A US Capitol Police officer has been suspended after anti-Semitic reading material was discovered near his work area on Sunday.

(CNN) -- A US Capitol Police officer has been suspended after anti-Semitic reading material was discovered near his work area on Sunday, according to a department spokesperson.

The spokesperson said in a statement that Capitol Police acting Chief Yogananda Pittman on Monday ordered the officer to be suspended and the officer will remain suspended pending an outcome of an investigation by the department's Office of Professional Responsibility.

"We take all allegations of inappropriate behavior seriously," Pittman said. "Once this matter was brought to my attention, I immediately ordered the officer to be suspended until the Office of Professional Responsibility can thoroughly investigate."

The Washington Post first reported the officer was suspended after a congressional aide reportedly saw the document in plain sight at a checkpoint.

A printed copy of the Protocols of the Meetings of the Learned Elders of Zion was left on a table inside an entrance to a House building, according to photos obtained by the Post. The text is a work of fiction published in a Russian newspaper in 1903, purporting to be documents showing a Jewish conspiracy to take over the world. The falsified papers were used as propaganda and influenced Adolf Hitler, according to the US Holocaust Memorial Museum.

Flags, signs and symbols of racist, White supremacist and extremist groups were displayed along with Trump 2020 banners and American flags at the January 6 riot at the US Capitol. Explicitly anti-Semitic imagery was seen among rioters at the mob, and several police officers appeared to tolerate the rioters' behavior.

A rioter who stormed the US Capitol wore a sweatshirt emblazoned with the phrase "Camp Auschwitz," the name of the Nazi concentration camp where about 1.1 million people were killed during World War II. The bottom of his shirt stated, "Work brings freedom," which is the rough translation of the phrase "Arbeit?macht frei" that was on the concentration camp's gates.

One Capitol police officer took a selfie with someone who was part of the mob that overtook the building, and another wore a "Make America Great Again" hat and started directing people around the building, according to Rep. Tim Ryan, an Ohio Democrat. Both were suspended in January.

Zach Fisch, chief of staff to New York Democrat Rep. Mondaire Jones, took a photo of the document Sunday evening while leaving the Capitol via one of the 24-hour entrances on the House side of the building before sharing them with the Post, the paper reported.

Seeing the document there "horrified me," Fisch said in a series of tweets Monday evening.

"This is both a national security problem and a workplace safety problem," he continued. "Our office is full of people -- Black, brown, Jewish, queer -- who have good reason to fear white supremacists. If the USCP is all that stands between us and the mob we saw on Jan. 6, how can we feel safe?"