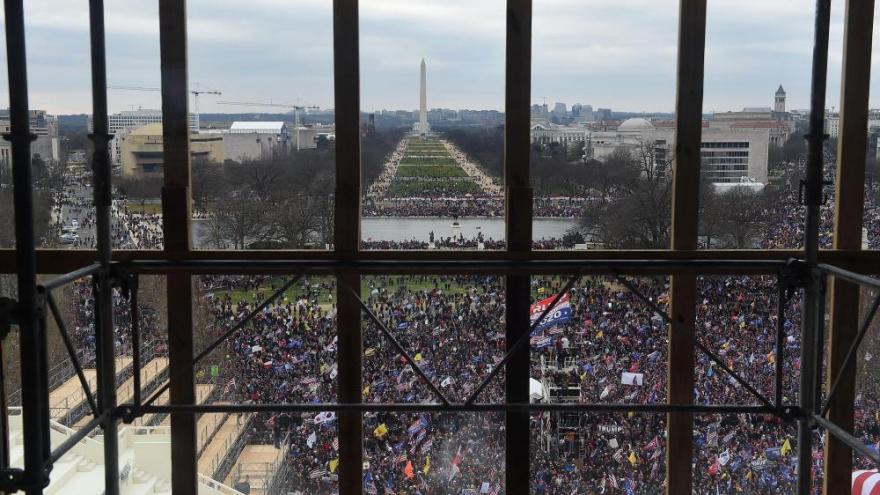 The inspector general overseeing a probe into the United States Capitol Police's preparation for and response to the January 6 insurrection is set to detail critical lapses in planning, policies and procedures resulting in the catastrophic failure that killed five people, including one of their own, Officer Brian Sicknick.

(CNN) -- The inspector general overseeing a probe into the United States Capitol Police's preparation for and response to the January 6 insurrection is set to detail critical lapses in planning, policies and procedures resulting in the catastrophic failure that killed five people, including one of their own, Officer Brian Sicknick.

Bolton describes a culture of policing, rather than protection, and recommends the department transform into a protection-driven organization, according to the prepared remarks.

"In regards to culture change, we see that the Department needs to move away from the thought process as a traditional Police Department and move to the posture as a Protective Agency," Bolton writes. "A police department is a reactive force. A crime is committed; police respond and make an arrest. Whereas, a Protective Agency is postured to being proactive to prevent events such as January 6th."

Bolton also plans to tell lawmakers there was a lack of consensus about the reality of the threat leading up to riot.

Bolton refers to the insurrection as a "takeover" of the Capitol in his prepared remarks, representing a bolder assessment of the security failures of that day than other Hill security officials have offered in the flurry of hearings since January 6.

CNN has previously reported on the first two reports generated by Bolton. In the first, he detailed the lack of a comprehensive, department-wide plan to manage the rally-turned-riot. Both the first and second reports put strong emphasis on intelligence breakdowns. Bolton's first report noted even the intelligence that Capitol Police used to prepare was rife with conflicting conclusions -- an observation acting House Sergeant at Arms Timothy Blodgett noted in a recent hearing about failures by Hill security officials.

Some of the intelligence shared within the Capitol Police concluded that the chances of civil disobedience and arrests related to the January 6 protest were improbable, despite another assessment that pointed out the anger and frustration among protesters could lead to violence targeted toward Congress.

Bolton's second report laid bare even more intelligence breakdowns that are best evidenced by a warning Capitol Police received from the Department of Homeland Security on December 21, 2020, but which it did not appear to fully utilize.

On that day, "the Department of Homeland Security notified the Department of a blog referencing tunnels on U.S. Capitol grounds used by Members of Congress and research of the website identified four 'threads/blog topics containing comments of concern,'" the summary states.

"The report identifies the website as https://thedonald.win and includes several pages of comments posted to the website," it adds.

In his prepared remarks, Bolton says his office will produce reports roughly every 30 days for the next several months.

The third report will be issued April 30.