Capitol Hill set for another desperate push on Biden's agenda as leaders put a $2.1 trillion option on the table 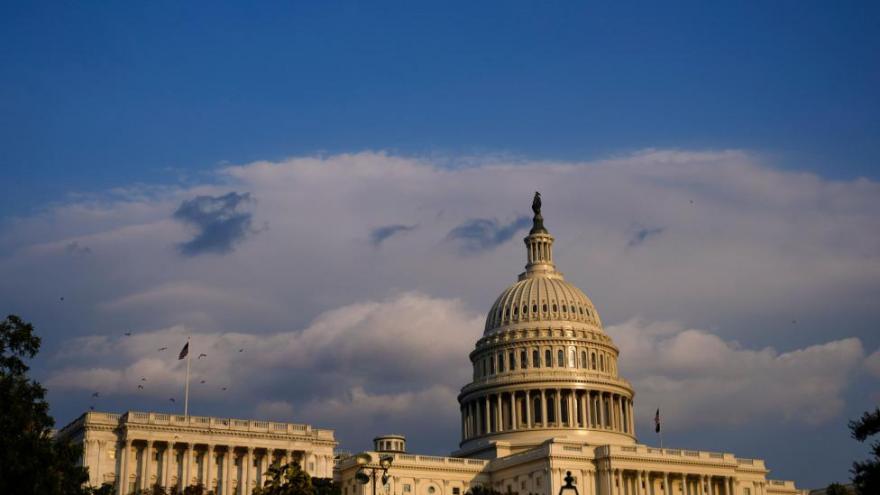 Capitol Hill is set for another desperate push on President Joe Biden's agenda as leaders put a $2.1 trillion option on the table.

(CNN) -- There wasn't a vote. There wasn't a deal. But a $2.1 trillion compromise framework has been floated by Democratic leaders and the White House after an all-day sprint to bridge the gap between their party's opposing factions.

Despite an 11-hour scramble, Democratic leaders left the US Capitol Thursday night without a victory on a $1.2 trillion infrastructure bill that just months ago looked to be a sign President Joe Biden's legislative agenda was well on its way in his first year. Hours of feverish private meetings, calls and Zooms between Democratic leaders, their staff and White House officials sought to do what many, including those directly involved, thought impossible heading into Thursday: Bridge a gap that only seemed to grow deeper by the hour.

It was, in fact, impossible. A pledged vote was delayed. A clear framework for a deal wasn't secured. The path toward pulling Biden's agenda back from the brink still isn't clear. But the mood on both sides of Pennsylvania Avenue is more optimistic than it was 24 hours ago.

The agreement Democratic leaders and the White House are attempting to craft isn't meant to be a detailed provision-by-provision rundown of the final economic and climate package, but instead the general parameters that, possibly, could unlock progressive votes on the infrastructure measure.

While there isn't a final document, the outline circulated between key players on Thursday evening targeted a topline number of $2.1 trillion, and laid out the baseline elements of the climate, social and health care areas, according to two people with direct knowledge of the efforts.

That rough sketch, however, wasn't sitting well with West Virginia Democratic Sen. Joe Manchin -- who after two-plus hours in his hideaway with Arizona Democratic Sen. Kyrsten Sinema and then White House officials -- emerged around 10 p.m. ET to announce he saw no path forward on a deal Thursday night.

A source close to the negotiations said Friday that no offer or top line number was presented by leadership in discussions with Manchin and Sinema about a possible framework agreement to move forward with both measures Thursday.

On Friday evening in a private meeting, however, Biden did float a range that Democrats may have to rally around.

Three members, including Texas Rep. Henry Cuellar, said the President told the caucus that he sees a potential range around $2 trillion even as he agreed most Democrats -- including him -- would prefer $3.5 trillion.

House progressives haven't blinked. Neither has Manchin. That is a dynamic that, on its face, would make any near-term deal to unlock the path forward on Biden's sweeping dual-pronged $4 trillion legislative agenda impossible. But key elements that had been floating quietly behind the scenes on several fronts were officially put on the table on Thursday after weeks of ambiguity. That in and of itself marked progress -- but how much remains a very open question.

White House officials have been clear behind closed doors, according to multiple people familiar with the conversations, that they need to see a number at or over $2 trillion in order to have any chance to bring progressives on board.

The working theory is Manchin can be moved up (and his refusal to directly answer CNN's Manu Raju about whether $1.5 trillion was his absolute ceiling was closely noted by White House officials), and progressives, knowing Manchin's position, could come down given the stakes and, actual historic scale of even $2 trillion.

Manchin, even as he was walking out of a late night meeting with Biden's top negotiators, made clear he was still at $1.5 trillion.

No progressive has signed off on anything as low as $2 trillion at this point, and the public position has said nothing about a framework -- only Senate action on an actual proposal.

That would appear to be a problem.

And yet, most lawmakers and administration officials went into Thursday trying to figure out how to keep things on track after a failed or pulled vote. The fact there are tangible talks over a framework effort that for days couldn't get off the ground is definitely ... something.

Deadlines force action and clarity. Whether it was Manchin's $1.5 trillion topline spending number -- which he hasn't wavered from -- becoming public or the clear show of muscle from House progressives, that's precisely what transpired throughout the day on Thursday.

This was, to a degree, the moment Biden and his team had cautiously and carefully (to the point of frustration for many House Democrats) been pushing toward for the better part of the last 10 days.

The question now is did the day, even though Democrats failed to secure an outcome by midnight, create the conditions for a real deal? That, more than anything else, was what was potentially laid out by the harried and frantic push that is expected to continue. One aide involved likened the day to finally building a longer runway to eventually land the plane.

"We're are unquestionably closer now than we were 12 hours from now," one person directly involved told CNN. "That doesn't mean a deal is imminent."

The goal is to have the infrastructure vote on the end of the day, which would require not just the framework, but sign off by all the key players, including (and most importantly), the House progressives.

That is a way away from happening at the moment and House progressives feel very comfortable about where they are, which is demanding a vote. Not a framework. The caucus is holding regular calls with one another, checking in to ensure they hold the line. So far, the feeling is that they can.

"The President is grateful to Speaker Pelosi and Leader Schumer for their extraordinary leadership, and to Members from across the Democratic Caucus who have worked so hard the past few days to try to reach an agreement on how to proceed on the Infrastructure Bill and the Build Back Better plan. A great deal of progress has been made this week, and we are closer to an agreement than ever. But we are not there yet, and so, we will need some additional time to finish the work, starting tomorrow morning first thing.

"While Democrats do have some differences, we share common goals of creating good union jobs, building a clean energy future, cutting taxes for working families and small businesses, helping to give those families breathing room on basic expenses—and doing it without adding to the deficit, by making those at the top pay their fair share."

Unofficially, there was a high degree of skepticism for much of Thursday inside the West Wing, but it was made clear everything that could be done to help Pelosi's push -- and clinch progress on Biden's agenda -- was to be done, officials said.

By Thursday evening there was legitimate optimism that actual progress had been made and if nothing else, the deadline forced the hand of many of the key parties.

Biden, who was kept updated throughout the day by his top legislative and policy officials, was prepared to go to Capitol Hill late into the evening if Pelosi called on him to do so. That remains the case on Friday.

Still, a time crunch and the very real gap in both numbers and policy between the two sides of the party create as much of a possibility of another day of failure as they do a deal.

"We all have a better idea of what's possible and what isn't," one official said. "That, of course, doesn't make a framework inevitable or even necessarily possible."

For years, the energy in the Democratic party has been on the left.

But in presidential primaries and on Capitol Hill, the center of gravity has remained with seasoned and established politicians. On tough votes, progressives have largely caved or been told their agenda will get moved on the "next" bill.

What is happening now is a test.

This isn't just about infrastructure or a social safety net bill. Aides and members view this as a seminal moment to prove that their caucus is powerful too, that it cannot be ignored or sidelined in the name of protecting moderate seats. This is the first time progressives have really dug in this Congress.

It's setting the tone for how negotiations can and will unfold going forward.

Even if a deal comes together, this is a moment that reshapes, in a concrete manner, the dynamics on Capitol Hill.

Something else to keep an eye on

The inability to move forward on a vote meant the law authorizing federal spending on surface transportation programs technically lapsed. The effect isn't expected to be immediate or dramatic, but this is absolutely an area lawmakers in both parties don't want to let linger or hang out there, even if it means moving a short-term patch at some point on Friday.

Pelosi pledged to House moderates that the House would vote on the infrastructure package by September 30.

And because congressional procedure is just the perfect encapsulation of the absurdity that at times defines the legislative branch, at least in the House, Friday is still September 30.

What's that you say? Isn't it October?

The House never adjourned last night when it was officially announced there would be no vote. Instead, it went into recess, where it will stay until Friday morning.

In other words, it's still the same legislative day that was gaveled into session on Thursday.

So, technically, it's still September 30 in the House. And technically, if the infrastructure vote happens today, that pledge has been made good.

Does this actually matter? Unless you are a congressman who made really bold predictions on live television about a whip count and a vote schedule that turned out to be quite inaccurate, probably not.

But then again, maybe you are that congressman.